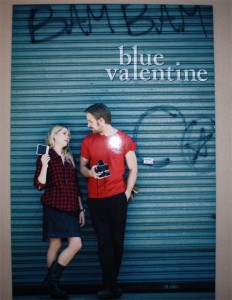 The news of indie favourites Grizzly Bear contributing an all-original soundtrack for the intense romantic drama Blue Valentine has been circulating on the internets for quite sometime now. Bated breaths were held, waiting for the new material to surface accompanied closely by the  also no doubt brilliant, yet heartbreakingly beautiful, film featuring Ryan Gosling and Michelle Williams. However, according to The Playlist, since the start date was pushed up,  the band ran out of time to create the promised original material and were left to compile old favourites amongst a few choice songs from fellow band member side project Department of Eagles, Motown group Penny & the Quarters, and Mr. Ryan Gosling himself singing his candid number featured in the trailer. Grizzly Bear has made themselves into a quintessential band of this millennium with their startlingly refreshing and unique music. A lush blend of both usual and unusual instruments pairings—guitars with key-flutes, a flute, drum and clarinet and always harmonized vocals—it makes sense that this Brooklyn based group would be such a prominent force on the soundtrack because they embody a similar space and energy of the sombre realism that this film takes up.

Blue Valentine has been shyly mumbled as an ‘effective cinematic birth-control’, aiming to portray the central relationship—more a distinct clash between two individuals than an overall meld of soul-mates—as honest and real, which are values Grizzly Bear have always written and performed with in their music. Supremely beautiful songs like ‘Shift (Alternate Version)’ and ‘Alligator’ are balanced by shockingly bleak ones like ‘He Hit Me’ (originally recorded by the Crystals) and serve to create a juxtaposition of emotion and mentality. How and why a song can be so achingly beautiful yet encompass such dark messages seems to teeter on the idea of which this film expands upon. The film sees these two characters in motion and Grizzly Bear‘s and Department of Eagles‘ layered harmonies compels those motions and events even further into the cerebral awakening of the audience’s collective experience. The lush ambiance creates such a wealth of emotion and possibility that is it almost uncannily surreal. It has a perfect compatibility with the intention of the film and the idiosyncrasies of its characters; surfaces are beautiful, idealistic, and romantic, while the guttural depths are composed of disordered thoughts, flawed intentions and morbid truths. Outside the Grizzly Bear and Department of Eagles contributions, Ryan Gosling sings ‘You Always Hurt the One You Love’, featured in the official trailer, creating the foreshadowing necessary to watch this film. Gosling sings this dry ballad from the pit of his soul; tender sadness seeping in with every humorous chuckle his character may have had. It also comes as no surprise that Gosling so easily slipped into  this moment, for his band, Dead Man’s Bones, has the same expression of flawed perfection that he sings of—albeit Gosling’s band attempts a more ghostly haunted feel than the ukelele number does. Also, featured singularly as the couple’s song, is Penny & the Quarters’ ‘You and Me.’ According to The Indepedent, the romantic soul number was actually one of lost legend which Gosling stumbled upon only to reveal it to director Derek Cianfrance as the song to represent the film’s couple. After the film premiered, those involved in the film as well as interested listeners were captivated and began seeking the original recorders. The original composers of this song and the names of those involved remain unknown because the song was only recorded with a few other demos and eventually shelved in storage at a record label until its late president’s  assets were auctioned, including archived tapes, which were purchased by record company The Numero Group and eventually stumbled, somehow, into Gosling’s ears. The story seems a bit unbelievable—Gosling finding this lost gem to perfectly encompass the first meeting of the two destined, yet destructive, lovers—however, it adds to the subtle mysteries and ghostly elements of this film. The soundtrack creates this feeling of haunting and fits so well with the other contributing factors like: New York is (apparently) one of the most haunted places in the world, Dead Man’s Bones heavily references gothic imagery and styles, Grizzly Bear’s sounds are reminiscent of bewildered ghosts wandering deserted city streets, longing for life and companionship, director Cianfrance’s unrealized wishes for this film nine years in the making,  and now this lost soul band’s reemergence adds a certain textured quality to the soundtrack—a forgotten loneliness based on their unfulfilled destinies. Blue Valentine is composed of all of life’s absurdities, marvels, disappointments and truths; love, death, and the unanswerable. This soundtrack is a wonderful compilation of both instrumental and original Grizzly Bear songs, a charming Gosling note, a miraculous mystery and the whispering voices of those forlorn lovers in every crevice of the world.