Home
Entertainment
The Originals, Ep. 1.02, “House of the Rising Son”: Family Above All
Prev Article Next Article 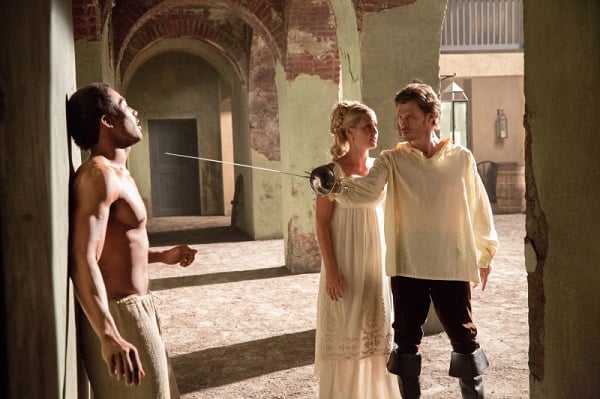 The Originals, Season 1, Episode 2, “House of the Rising Son”
Written by Diane Ademu-John and Declan De Barra
Directed by Brad Turner
Airs Tuesdays at 8pm ET on The CW

On this week’s The Originals, Rebekah arrives in New Orleans, Marcel gives Klaus a vamps-only tour, Klaus attempts to undermine his former protege, Hayley seeks help with her pregnancy, and Elijah remains missing.

Like sister show The Vampire Diaries, The Originals is falling prey to cheesy voice-overs at the beginning of each episode (to be fair, there have only been two episodes thus far). Luckily, The Vampire Diaries realized the mistake and rectified it fast–how long until The Originals kills the habit? Hopefully soon. Also, while lengthy exposition is forgivable in a series’ pilot, it’s less forgivable in episode two. Certain aspects of the show’s setting (for example, its home in New Orleans) don’t need repeating. And, though the flashbacks are well done, there’s no point in having them if they’re going to be narrated. The entire point of a flashback is to show backstory we can’t otherwise be told–when the flashbacks are dictated to us anyway, then their entire purpose is negated.

Already, The Originals is establishing itself as a slow-burning character drama, so the flashbacks work incredibly well with the show’s mood. The most pressing, high stakes drama during the present comes from the characters’ relationships with one another–exposition aside, the best way to show deep-rooted relationships between centuries-old vampires (most notably Klaus and Marcel, whose love-hate relationship already fuels the show) is through glimpses into the past.

The character who benefits most from flashbacks, however, is Klaus himself. Even during his The Vampire Diaries days, Joseph Morgan added emotional depth and complexity to a character who would otherwise be little more than a monster. Existing Klaus fans presumably already have an opinion about the psychopathic original vampire, but newbies need to see what exists in Klaus that’s worth rooting for, or they won’t stick around for a horrendously vicious protagonist. Viewers need to see more aspects of Klaus’s multifaceted personality, and the writers clearly know this–how better to show this than through his first meeting with Marcel, when Marcel was a small slave child? Cue tears. Joseph Morgan so thoroughly understands Klaus that he can easily sway viewers to his side, even after they’ve just witnessed him slaughtering innocent civilians or threatening the life of his unborn baby’s mother.

Speaking of unborn children, it only took The Originals two episodes to touch upon the subject of abortion. Sure, they never explicitly say the word, and there is a supernatural twist, but poisoning oneself with wolfsbane to harm one’s baby still does the trick. Honestly, the writers could have spent more time dwelling on this storyline and exploring Hayley’s internal dilemma. After all, abortion is very much a hot topic in the world right now, especially with women (i.e. the show’s target audience), and they could have given the brief subplot more depth without coming down in support of one side of the issue or another. Still, it is nice to see an episode of television unflinchingly approach such a sensitive subject without being too heavy-handed. And Phoebe Tonkin handles the issue well–showing subtle hints inside Hayley’s troubled frame of mind during her dilemma, as well as her calm acceptance in saving the baby’s life above her own well-being.

Even Rebekah, the show’s other leading headstrong lady, manages to show an incredible range of emotions in a very short time span. As two strong personalities, Rebekah and Hayley could easily clash, but the writers take a different route by having the pair bond over their inability to abandon their family members, even for the sake of their own health and sanity. Rebekah has more reason than anyone to flee New Orleans and escape her dysfunctional family altogether, but her inability to leave says a lot about her character, and Claire Holt plays her beautifully–smoothly channeling everything from Rebekah’s fits of rage to her lovelorn sobbing to her fearful stubbornness.

The Originals is so thoroughly about family–biological and found–that having great actors is a must. Thankfully, the actors (and writers!) on the show know their characters extremely well, and they play off one another brilliantly.  Even slow pacing is welcome when the characters, and their stories, are this good.