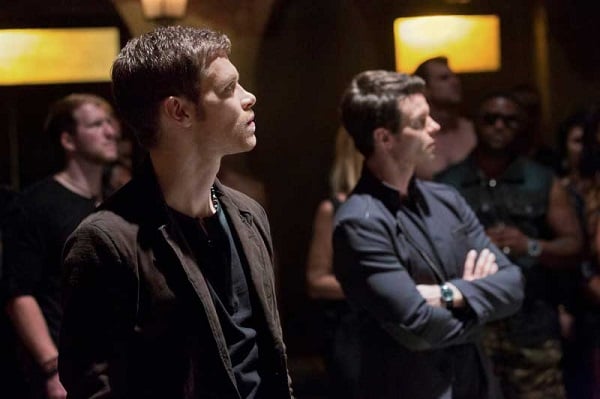 On this week’s The Originals, Tyler pays New Orleans a bloody visit, Hayley stumbles upon her family, Elijah disappoints Klaus, Rebekah and Marcel discuss the future, and Davina helps Josh overcome his compulsion to Klaus.

At this point, Klaus is definitely a full-blooded villain and antagonist on this show, despite The Originals‘s attempts to portray him otherwise. Even The Vampire Diaries tried to give him redeeming qualities, but, seven episodes in on The Originals, he’s already back to being a vicious and petty monster. How can the audience possibly see him as the hero of the series, as this show seems to want us to? Unless the endgame is Klaus’s redemption, which, if done right, could be great.

Anyway, let’s spend less time following his reign of terror and more time watching Marcel’s ruling of the city, Rebekah and Elijah’s struggles to separate themselves from their monstrous sibling, or even Hayley’s quest to discover more about herself and her family. Those are genuinely intriguing and fascinating stories–watching an overgrown, petulant child is not. Honestly, the best thing that could happen to Klaus at this point is the total abandonment of his family members–whom he repeatedly uses because they’re “family” and guilts them into sticking with him. Klaus alone is something worth watching, if only because it’d mean a wake-up call for the 1,000-year-old vampire.

Despite the previous paragraphs suggesting otherwise, “Bloodletting” is a genuinely good episode. The crossover bits with Tyler Lockwood are good; even though Lockwood seems a tad out of character, his rage at Klaus is 100% justified and understandable. If only he didn’t take his anger out on Hayley, who’s been stuck in the middle of too many feuding vampires when all she desires is a stable family.

Of course, the girl can hold her own against the horrible (and not-so-horrible) men surrounding her. Strong women (something I repeatedly rave about) is a quality this show possesses in spades–they’re everywhere, and it’s as refreshing as it is beautiful. Two of the women were even missing this week, allowing Hayley, Rebekah, and Davina to up their respective games; they did it with ease.

One complaint, however, is the total reverse Marcel’s taken in regards to his relationship with Rebekah. For the first handful of episodes, he seemed completely uninterested in Rebekah despite their past romantic history. His interests were on Camille, sure, but they shifted awfully quickly back to Rebekah once Camille was removed from the picture. His sentiments about once designing and attempting to build a house for himself and Rebekah just felt a little false–their budding relationship just feels a little forced right now, like it missed its chance to feel natural.

Lastly, the music, as always, is right on point. Chris Mollere proves on a weekly basis that he knows what he’s doing as the show’s music supervisor. One of the highlights is the opening song, by The Neighbourhood, queued to a fight club-esque vampire competition for daylight rings. The song fit brilliantly, so kudos times ten to Mollere.

Hopefully next week we’ll start learning more about Hayley’s family–that’s one storyline the show could do wonders with, especially given her character’s lukewarm response from audiences. Oh, and that growing bond between her and Elijah–more, please.