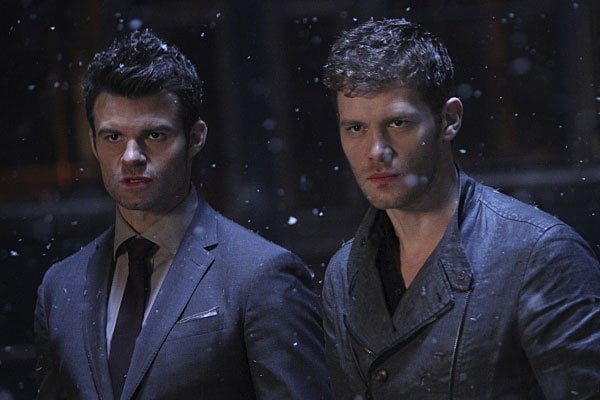 The Originals, Season 2, Episode 22, “Ashes to Ashes”
Written by Christopher Hollier and Diane Ademu-John
Directed by Matt Hastings
Airs Mondays at 8pm (ET) on The CW

On this week’s The Originals finale, the Mikaelson siblings take a stand against Dahlia, Davina resurrects Esther, Cami and Vincent discuss their lives, and Marcel seeks to protect himself.

For two seasons, The Originals‘s theme has been heavily focused on family, and this is extra apparent in “Ashes to Ashes” as the Mikaelson siblings–despite a heavy lack of trust and an excess of anger–team up to defeat a common enemy. With so much bad behavior by Klaus recently, it’s nice that the show isn’t letting him be redeemed so quickly or easily, and he’s finally being forced to face the consequences of his actions in the form of a broken family.

The most exciting character development during the hour is Elijah’s total anger toward Klaus, as well as his willingness to completely sever ties with his brother. Elijah has, more than any other original sibling, been a staunch supporter of Klaus since the very beginning, even when it felt like Klaus was beyond redemption and behaving like a monster. Elijah’s loyalty to his brother has always been extremely blind, so, though it’s a long time coming, his desire to break from Klaus feels like a natural progression of Elijah’s character, especially after the slow transformation he’s been going through all season. Noticeably, it’s Klaus attacking Gia and Hayley that finally sets Elijah off–he’s not known for having attachments outside of the family, and it’s a nice reminder that people who aren’t Mikaelsons are capable of affecting Mikaelsons to such a powerful degree.

At one point in the episode, Marcel makes a very astute observation: “If you’re not a Mikaelson, you’re cannon fodder.” This feels true not only in how the cast is handled–Hayley is benched for the majority of the episode (though she does get a very sweet and well-shot scene with Elijah), and Cami and Davina are often absent–but also in how the characters treat each other. The Mikaelsons prove during the hour that there’s really no one they won’t betray to save one another and protect their own interests, but, funnily enough, they seem to betray and step on one another almost as often as they attack their allies. Marcel notices this as well and calls it the Mikaelson Paradox (“You want to love and kill each other, all at the same time!”). Unfortunately, despite the name The Originals, the show has built up a very diverse and well-fleshed out cast who all deserve screen time and decent storylines; hopefully in season three the non-Mikaelson characters will receive better treatment.

But, since the finale is all about the Mikaelsons, it’s unsurprising that matriarch Esther is briefly resurrected to join the fun. Her resurrection scene is both creepy (she breaks through her coffin in a very zombie-like fashion) and incredibly cool (she rises out of the box dripping black sludge and looking characteristically powerful). Plus, it’s both very weird and very funny that she spends most of her rebirth being led around on chains by Elijah. Unfortunately, her return leads to an extremely cheesy and quick end to Dahlia. After posing such a huge threat to the Mikaelsons, Dahlia’s defeat feels disappointing–her character’s been largely mishandled since the family first began to talk about her, with the threat of her arrival overshadowing a few too many episodes before she finally arrived.

Luckily, enough genuinely good material happens in the episode to make up for Dahlia’s rapid exit. Vincent and Cami get a very nice bar scene where they talk about their unfortunate involvement with the Mikaelsons and the supernatural shenanigans in NOLA, and Cami rightly scolds Vincent for abandoning Davina after passing her his responsibilities. Also, it’s a testament to both Claire Holt and Maisie Richardson-Sellers that, while it’s a treat to see Claire Holt return, it’s also a disappointment to see Richardson-Sellers leave, and vice versa. Both bring extraordinary depth to the role of Rebekah Mikaelson, and both are blessed with an abundance of talent; it’s an unfortunate shame that they can’t simultaneously be on the show, but The Originals does smartly leave the door open for Holt to return in the future.

“Ashes to Ashes” is just as thrilling, tense, and heartfelt as any The Originals finale, even if it does feel a little anti-climactic in how it resolves Dahlia’s storyline. Luckily, the emotional pay-off–especially in the fracturing of the Mikaelson family–feels satisfying and well-earned, and the characters are all in position by episode’s end for an extremely promising season three.