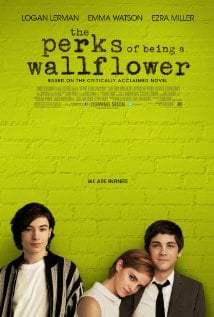 The Perks of Being a Wallflower

There are times during The Perks of Being a Wallflower when it looks like this film will be able to stand alongside such cinematic coming-of-age landmarks as Stand by Me and Rushmore, that its quality will remain steady and unwavering. However, throughout the film, knowledge of the source material feels mandatory, not suggested. Even if a movie’s based on a book, play, or musical, prior awareness of what’s being adapted shouldn’t be demanded of each audience member to appreciate its value. While The Perks of Being a Wallflower is sometimes incisive and surprisingly serious-minded, it never quite reaches the same pinnacle as other classics of the genre.

Logan Lerman plays Charlie, a shy teenager—manifesting most obviously in a near-physical rigidity—beginning high school after an apparently rough summer that included a mysterious hospital stay. Charlie delves into his innermost thoughts only via letters to an unnamed acquaintance, but makes a few close friends at his Pittsburgh-area high school, including Sam and Patrick (Emma Watson and Ezra Miller), stepsiblings with similarly quirky tastes in music, film, and life. Charlie quickly falls head over heels in love with Sam; however, as much as Charlie wants his life to become simpler, past events keep pushing at his mind, causing him anguish and grief he can barely handle. The first two-thirds of the film’s plot may feel vague, but it’s for good reason. Though The Perks of Being a Wallflower aims to be a hopeful and inspiring look at teenage life in the early 1990s, writer and director Stephen Chbosky (who adapted his own novel) is willing to make these characters more complex than they may seem on the surface, or he’s at least willing to try. From the beginning, Charlie is both a relatable and somewhat suspicious protagonist. He refers to his troubles—and we see him taking medicine early on—but never in a direct way. Though Lerman narrates a good chunk of the film through Charlie’s letters, telling us a lot about the various teenagers and how their romantic relationships change from week to week, there’s very little direct dialogue about Charlie’s psychological scars. On the one hand, such subtlety is welcome in mainstream filmmaking. Too often, we get every emotional beat for teenage characters in other movies spelled out in exacting, dispassionate form. However, The Perks of Being a Wallflower tips the scales the other way, sometimes being so opaque as to dull the power of its surprises, specifically those in the third act.

Most attention surrounding The Perks of Being a Wallflower is focused on Watson, in her first major post-Harry Potter role. While her English accent often fights its way out of the American dialect she’s working with, Watson is honest and believable as Sam, whose confidence and friendly attitude masks traumas that are surprisingly similar to those Charlie has. Lerman’s suitably introverted as Charlie, far easier to accept as an awkward teenager than as, say, the cocky son of Greek gods in Percy Jackson. Miller’s likable and outrageous as Patrick, a consistent source of comic relief even in darker sequences. The rest of the ensemble cast, especially Mae Whitman as another of Charlie’s new friends and Paul Rudd as Charlie’s English teacher, are solid, even if they’re not particularly memorable. The real issue is that The Perks of Being a Wallflower, the movie, feels like a rough sketch of The Perks of Being a Wallflower, the book. Though you could construe that as a compliment to Chbosky’s faithful storytelling, each character deserves a larger story. Chbosky is happy to add dimension to minor characters, such as the star quarterback (Johnny Simmons, quickly becoming a secret weapon in high school movies). Still, the subplots he hints at—Charlie’s sister dealing with an abusive boyfriend, or Patrick’s secret romance—never get as much attention as they deserve. As they appear in the film, it’s almost better if Chbosky didn’t acknowledge these plots at all. Why spend only a couple minutes on stories that deserve their own full-length adaptations?

So much of The Perks of Being a Wallflower is engaging and authentic that it’s disheartening to watch the film fumble in key moments. Though she’s not the lead, Emma Watson made a wise choice in moving past the Harry Potter films not by choosing a flashy, look-at-me type of role, but something more down-to-earth. And for a first-time director, Stephen Chbosky doesn’t make any false moves, nor does he try to inject style where it’s not required. Nevertheless, The Perks of Being a Wallflower may well be a movie best appreciated if you’ve read the book, making its power as a standalone entity questionable. (With the Harry Potter series included, that makes for a strange trend in Watson’s films.) The Perks of Being a Wallflower is something of a letdown, only because it could’ve been a classic if it tried just a bit harder.

Note. In the Phoenix area, The Perks of Being a Wallflower will be playing exclusively this weekend at the Harkins Tempe Marketplace 16 and the Harkins Scottsdale 101 14.