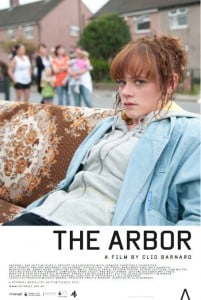 In her video instillation piece Trauma 2000, the British conceptual artist Gillian Wearing placed want ads in various newspapers, seeking individuals willing to be taped while detailing their most painful, intimate stories.  Of those who volunteered, many opened up about the emotional, physical and sexual abuse they had suffered as children and as spouses.  To make the telling bearable – indeed, possible – Wearing employed a device: each volunteer donned a cheap, near-featureless plastic mask that hid the entire face except for the eyes.  The masks add an additional layer of aesthetic distance, erecting a second artifice between subject and viewer, this one more readily visible than the camera itself.  Like the camera, the eye slits focus both attention and expressive intent.  We are drawn to the way the pupils dance in the white of the sclera, the blinks and darts moving in time with the timber of the voice.  By limiting the avenues of expression, denying us the full range of the speaker’s facial twitches and ticks, Wearing separates us from her subject but also makes it easier for us to extend our empathy to the words being spoken.

Prior to the title card of Cilo Barnard’s The Arbor, text appears on screen informing us that the film “is a true story, filmed with actors lip-syncing to the voices of the people whose story it tells.”  As a concept it may not be immediately appealing, but shortly thereafter we are looking in on a bedroom in West Yorkshire, England listening to the voice of Lorraine Dunbar coming out of the mouth of Manjinder Virk – “I’ve got loads of childhood memories, but none of them good…” – and the effect is startling.  The sound (expertly designed by Tim Baker) syncs fully with the actress’s lips, but not perfectly so, creating a similar push-pull to that of Wearing’s piece, in which we are allowed to be engrossed but constantly aware of the limits of what we are watching.

The Arbor is nominally a documentary in that we hear actual people speaking of real events, but in the ambition of its form and scope of its ideas the film verges on creating its own brand of cinematic nonfiction.  Taking its name from a road that runs through a Bradford housing project, The Arbor is haunted by Andrea Dunbar, who grew up on that street, was recognized as one of the most promising playwright of her generation, and died at 29 of a brain aneurism in a pub bathroom not far from where she was born.  Dunbar rose to fame on the strength of her first play, also titled The Arbor, and the follow-up Rita, Sue and Bob Too, the latter of which she also adapted into a movie.  Both works were largely autobiographical, drawing from the profanity of Dunbar’s neighborhood surroundings, the hostility of her home life, and the violence and hatred hurled at her when she became pregnant with a Pakistani man’s baby, her oldest daughter Lorraine.  When Dunbar died, she left behind three children, all from different fathers.

We only see Andrea in archival footage, mostly drawn from a BBC profile shot in the early 1980s.  The contemporary voices we hear are of Andrea’s sisters, her brother, her former boyfriend, and especially her children – Lisa (mimed on screen by Christine Bottomley), Andrew (Matthew McNulty), and Lorraine (Virk).  All those interviewed still reside in Bradford, and they are mostly reserved when it comes to discussing Andrea’s drinking, mental illness and abuse of her children.  The exception is Lorraine, who after her mother’s death turned to drugs and prostitution, and recently finished serving a three-year prison sentence for the negligent manslaughter of her infant son.  Her candor is underscored by a cruel irony: Lorraine’s conception and birth served as the plot for Andrea’s play, and while her life may superficially resemble one of her mother’s fictions there is pain and grief there that could never be fully captured on the stage or screen.

Along with the dramatized interviews, The Arbor stages selected scenes from Andrea Dunbar’s plays on the streets and court yards where they are set.  The contrast between the words Dunbar wrote and the speech of her relatives and neighbors gives insight not only into her work, but into the crafting of biographical works of art.  “I think she wrote with great wit and great perception about the things happening around her,” says Max Stafford-Clark (his words also mouthed by an actor), the London theater director who discovered Dunbar.  There is more than wit on display though; Dunbar’s talent was taking the mashed, broken syntax she was immersed in and pulling on threads that exposed basic motivations of character, respinning them into something articulate and rhythmic.  Essentially the film does the same thing.  By putting its subjects’ speech in the mouths of actors, it can control gazes and gestures.  It can stretch silences for dramatic effect, such as those where Virk kneads her fingers together in between Lorraine’s words.  And it can emphasize minutia – Lorraine can remember the exact price of sweets at the shop near the pub her mother used to drink at – for emotional connection.

The use of actors also allows the camera to move purposefully through the spaces that the principle subjects inhabit every day.  As with the 2009 drama Fish Tank – also concerned with a young woman and her family’s troubles with sex and booze in an English slum – The Arbor uses architectural framing to show how the urban surroundings work to contain and define the psychology if its character. (The question of why Andrea never left Bradford, even after her successes, is never directly asked and does not need to be.)  And within those surroundings, The Arbor is free to create set pieces that resonate beyond the words being spoken.  Such as when Lorraine recites her lines from A State Affair (a play commissioned on the 20th anniversary of the stage version of The Arbor, in which the same neighborhood is revisited through dramatic readings of individual interviews) to a theater only occupied by the image of Dunbar, lifted and superimposed from old news film.  Or when Lorraine’s extended family sits in that same theater, the camera slowly panning from one actor’s face to another’s, as they bristle at the ill Lorraine has spoken about her mother.  Each of these scenes carry a heightened, visceral emotional content that is not concerned with being strictly real, but trying to be true in the same manner of Fish Tank’s ending, in which a mother and her two daughters, the oldest of which is leaving home, gently shuffle in unison to Nas’ “Life’s A Bitch.”

But the most remarkable thing about The Arbor is not just its artistic transparency, but how self-aware it is, and how that transparency becomes so central to the film itself.  Because The Arbor makes its devices so readily visible, it avoids falling into what has become the popular perception of Andrea Dunbar’s plays – that they capture and transmit the reality of the situations they portray.  The same is often said of any drama rooted in a specific social environment, devaluing the craft at work and, sometimes, the worlds that are being represented.  When Felicia Pearson, who played the violent gang enforcer Snoop on HBO’s The Wire, was arrested in March in a DEA raid in Baltimore, the story was reported with genuine sadness and the faulty logic that the arrest demonstrates how true the character of Snoop was to those actually in the drug trade.  Snoop is a character, crafted – very well crafted – by Pearson and the show’s writers, but she is not Pearson.  Snoop does not embody the hardship Pearson has endured, the horrors she has seen, nor the joy she has experienced.  The Wire, like much excellent fiction, makes you empathize with its characters and think about social issues beyond the show itself, but it can not tell me what led Felicia Pearson to that drug house any more than a play can tell me what led Andrea Dunbar to die on a pub bathroom floor.  As Lorraine says about her mother’s plays, “As a piece of writing they are alright; as autobiography they are disgusting.”  The signature achievement of the film The Arbor, it is that as cinema it is exceptional, but it never pretends to hold lives in its hands.