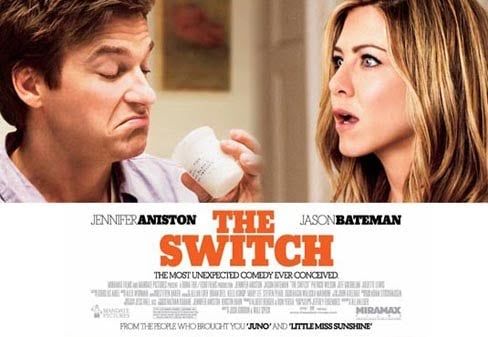 The Switch
Directed by Josh Gordon and Will Speck

Adaptation is a difficult art. Stay too faithful and you’ll wind up importing elements not appropriate to the new form, but stray too far and you’ll annoy proponents of the original. While the latter approach has probably resulted in a greater volume of good films, the sadly predictable rom-com The Switch – based on a New Yorker-published short story by Jeffrey Eugenides entitled “The Baster” – is in desperate need of a dose of its source material’s wrenching human feeling.

Jason Bateman, whose post-Arrested Development career has consisted almost entirely of awful movies, actually delivers one of his most effective performances as Wally, a hangdog stockbroker who harbors a secret longing for longtime friend and one-way confidant Cassie (Jennifer Aniston). When Cassie announces that she’s given up on looking for a suitable life partner, instead preferring to look for a sperm donor, he reacts as he always done: mild disdain followed by polite acceptance. A drunken mishap at her conception party results in Wally discarding the actual donor’s goods and replacing it with his own. Having conveniently forgotten the incident thanks to the booze – a lazy bit of screenwriting – Wally tries his best to but her out of his mind after she leaves town to raise the child, but when she returns seven years later, he can’t help but notice that the kid seems weirdly familiar.

The Switch has far more going for it than it should. Bateman is the movie’s most obvious coup – he brings Wally’s regret and cynical distance palpably to life, particularly in the post-“incident”, pre-reunion portion of the film, which features an agonizingly depressing blind date. The movie also boasts a nicely wry comic turn from Jeff Goldblum as Wally’s friend and co-worker, though their relationship is annoyingly arbitrary. Between them, they manage to wring a surprising number of laughs from the film’s horribly contrived scenarios. (On the other hand, Cassie is so free of any distinguishable characteristics at all that Aniston just has to show up.)

Unfortunately, no amount of refreshing humor can offset the fact that every single moment of The Switch follows the rom-com playbook to the letter – from the Thing Keeping Our Leads Apart to the Handsome, Perfect Other Man (in this case, original donor Patrick Wilson, also doing his best) to the Tearful Reconciliation, with familiar stops along the way (Omniscient Child, Life Lessons, Crap Narration). In fact, the last five minutes revert to form so harshly that it actually seems to have been imported from the 1950s. The Switch is one of those rare instances where everyone involved seems to know better – including directors Gordon and Speck, also responsible for the pretty-funny Blades of Glory – and are powerless to do anything about it.