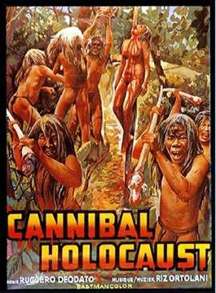 Two decades before The Blair Witch Project, the 1980 Italian exploitation film Cannibal Holocaust, directed by Ruggero Deodato, broke traditional cinematic conventions while creating major controversy following its release. Filmed in the Amazon Rainforest, the movie tells the story of four documentarians who journey deep into the jungle to film indigenous tribes. Two months later, after they fail to return, famous anthropologist Harold Monroe travels on a rescue mission to find the group. Eventually, he recovers and views their lost cans of film, which reveal the missing filmmakers’ fate – thus the birth of a genre known as “found footage films,” a genre (usually horror), in which all or a substantial part of a film is presented as an edit of recovered footage, often left behind by missing or dead protagonists.

Cannibal Holocaust was for years reviled as one of the most repulsive and morally corrupt movies of the 1970s spate of cannibal films. Like all films of its genre, the events onscreen are seen through the camera of one or more of the characters involved, who often speak off-screen, causing many naive moviegoers to consider it real. The effect, which is by now familiar, was incredibly shocking for the time and after premiering in Italy, the film was seized by a local magistrate, and Deodato was arrested on obscenity charges. He was later accused of making a snuff film due to rumors which claimed that certain actors were killed on camera. The film was later banned in Italy, the UK, Australia, and several other countries due to its graphic depiction of gore, sexual violence, and the inclusion of six genuine animal deaths.

One could argue that the genre is heavily influenced by Michael Powell’s 1960 thriller Peeping Tom. Although camcorders, cell phones, and the like hadn’t been invented yet, the main character, an aspiring documentary filmmaker, uses a 16mm Bolex camera to much the same effect.There is a looming presence in Peeping Tom. Many shots are seen through a camera’s viewfinder (its crosshairs appear on screen); in this manner the viewer is forced to identify with the killer’s point of view – his victims, screaming at the sight of their own death, look back at us. The effect is actually complete opposite of the genre’s future entries, in which the camera’s point of view is instead of the victims (not the killer) but there’s no denying the influence. It was the first film to use the camera as a horrific element and therefor important in the development of the genre. Peeping Tom was an immensely controversial film on initial release and the critical backlash was a major factor in finishing Powell’s career as a director in the UK. The film was quickly butchered by the studio and was shown briefly in US second-run houses and it wasn’t until 1979 that a restored version was released due to the efforts of director Martin Scorsese. Unfortunately Powell’s career never recovered from the critical attacks, and he made only a handful of features and shorts before his death in 1990.Powell noted in his autobiography, “I make a film that nobody wants to see and then, thirty years later, everybody has either seen it or wants to see it.” Today, the film is considered a masterpiece and one of the best British films ever made.

There are various ways in which the genre uses the camera to tell the story. Some let the camera do all the work while others provide interviews, commentary, and other narrative features. The former consists of films like Cloverfield and Blair Witch Project and the latter includes Cannibal Holocaust, and Diary of the Dead. Judging by box office numbers, those who follow the Blair Witch path turn into money making machines while the others find trouble ensuring a theatrical release. Perhaps no film used the “found footage” gimmick to create fresh scares better than The Blair Witch Project. The 1999 horror film presented the narrative as a documentary pieced together from amateur footage, filmed in real time. The film relates the story of three young student filmmakers who hike into the Black Hills near Burkittsville, Maryland to film a documentary about a local legend known as the Blair Witch, and subsequently go missing. The viewer is told that the three were never found, although their video and sound equipment (along with most of the footage they shot) was discovered a year later.

The film caused a major stir at Sundance for its offbeat, energetic, and eye-opening approach to filmmaking. Artisan quickly picked it up and with the help of a ground-breaking campaign to use the Internet and suggest the film was real, it grossed $248,639,099 worldwide. With a final production budget of only $25,000, Blair Witch became the third-highest grossing independent film of all time. The Internet swarmed with Blair Witch fan sites, Web boards, mailing lists, newsgroups, trailer sites, and general excitement about the movie months before the film’s release. The torrent of online talk about the movie aroused the curiosity of the offline press and the anticipation for the movie’s opening drove ticket sales through the roof. Nielson NetRatings had listed the official site as the 45th most visited location on the Web for the week ending August 1, with a reported 10.4 million page views and an astounding average visit of 16 minutes and 8 seconds. In short, the film was a clever, entertaining stunt and a terrific calling card for its fledgling filmmakers, that opened up the genre for many more future filmmakers to come.

Now decades later the sub-genre continues to grow with both critically acclaimed and box office hits such as Cloverfield, Paranormal Activity and [Rec] – but they are not always good. They range from the sublime to mediocre to downright horrible. Here is the best of the genre.

Directed by George A. Romero

Decades after Night was released, Romero chooses to target his movies at a much younger demographic, but still recaptures the indie spirit of his landmark debut. While compared with other first-person motion-sickness horror pictures like The Blair Witch Project and Cloverfield, George A. Romero’s Diary of the Dead isn’t quite as effective on devlivering the thrills and scares, but there’s enough social commentary and innovative splatter to earn the right to stand alongside anything that he has made. Set in the age of the Internet, from which the narrator, downloads unedited footage from a TV correspondent, the movie becomes a video within a video within a video.

listen to our George A. Romero podcast here.

Listen to our interview with George A. Romero here. Ruggero Deodato’s exploitation opus questions the power of the media in general by commenting on the manipulation of violence in both the news and documentary filmmaking. The film is effective in turning voyeurism into horror – it’s deserving of its cult status. Home Movie may not top my list but it does have the honor of being labeled the creepiest film listed here. Under the guise of found footage, the film creates some of the most tense and harrowing scenes in low budget filmmaking. Home Movie also belongs in another horror subgenre, “Killer Kid Films.” Something goes very wrong with ten-year old twins, Jack and Emily Poe and, to stop them, their parents must enter the nightmare of their minds. The only question is: who will survive the night? The movie documents one family’s descent into darkness, using a compilation of home-made videos of holiday celebrations, in a very visceral and realistic visual style. The Last Exorcism doesn’t fully deliver on the chilly promise of its Blair Witch-style premise, but with a terrific cast, clever script and tight direction, Exorcism offers a refreshing twist to films of demonic possession. This unpretentious indie thriller blends William Friedkin’s 1973 horror classic The Exorcist with The Blair Witch Project and spices it up with a dash of Rosemary’s Baby. The end result is a lean and unique variation on the documentary-gone-wrong theme.