Cutting above their weight

What words can be made from these letters: OLYZOBESBODI. The most fitting answer is; ‘Bloody Zombies’, you can also make ‘Blimey’ but that’s beside the point. Once again Telltale ventures back into the world of the undead. Episode One of the Michonne mini series rests so precariously on its laurels that with a slight breeze it could be knocked off and be sent tumbling down the same rabbit hole that The Jurassic Park game and Episode 5 of Game Of Thrones both reside in and exchange stories on how ‘misunderstood’ they were. This isn’t to say that the initial episode is bad, but the overwhelming feeling of ‘been here, seen that, done that’ permeates from beginning to end. When a huge component of the source material is built upon shock value the last thing you want is to feel is that you’ve stopped at the same train station again.

The biggest problem is one that every Telltale series now suffers from; every game uses the exact same template. Telltale over the recent years has taken on a variety of different licenses, ranging from the comedic (Tales From The Borderlands) to the surprising (Minecraft) but it’s just a different foil for the same content. Dialogue is chosen via 4 options on a timer, character movement is limited to small sets and the animation feels like it came out of school project. Back when the first season of The Walking Dead was released it was scarcely believable that four years later no big improvements or changes would be implemented, especially to the archaic engine which has been used since the Sam and Max days. It’s 2016 and Telltale still haven’t taken on the rather rudimentary idea of motion captured performances, but that’s alright, Life Is Strange proved that even without lifelike character acting you can still deliver a high class and involving narrative with empathetic people. 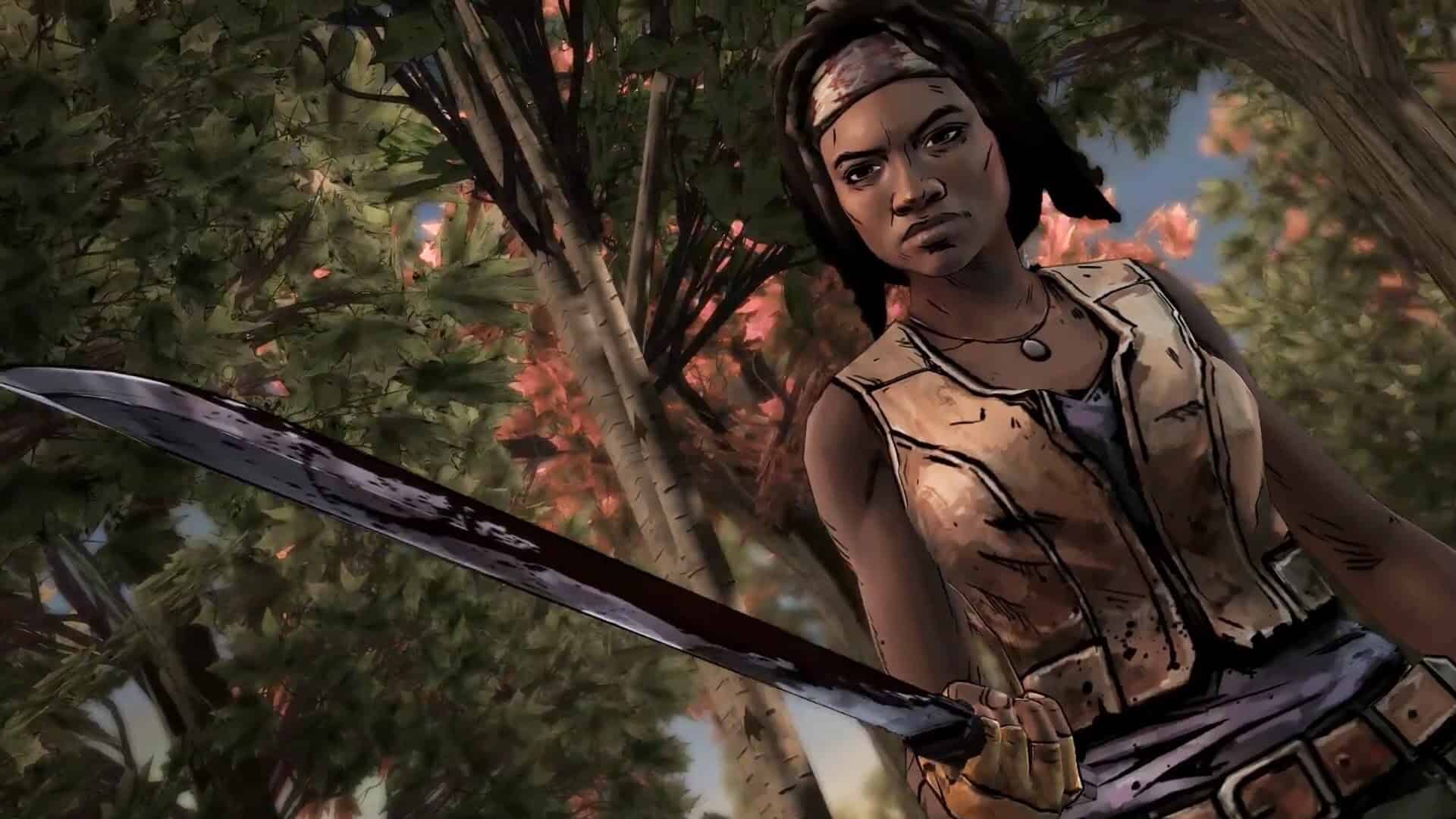 Episode one: ‘In Too Deep‘, introduces us to a much loved character from both the comics and the TV show, although in this case it’s the comic book interpretation that has been brought to life through the controller. It takes place between a section of the comics where Michonne is absent from the rest of the group, even though in theory it could take place in any nebulous time line, allowing non readers to understand the plot presented. Being overly familiar to the source material is somewhat detrimental, Michonne cannot die, she’s invincible. Knowing that, the approach taken with her character means you never feel in harms way, even when the game threatens her life you know she’s untouchable. In turn, any choice given to you that might risk her life instead of someone else is easy given her canon status. Michonne, is thankfully an interesting character, haunted by her past that at several points in episode one show a side of her that suggests an inability to move on. She can often be seen as rather dour and dry, delivering lines with a lack of expression but in line with the comics, she can also be heavily funny and compassionate. The rest of the group you’re hastily introduced to, like a conveyor belt of caricatures get little time to see much development. The exception is Pete, who gets to spend several scenes in the presence of Michonne and therefore has some time to build up their relationship. One point of praise is the diversity of characters on display, representing different nationalities, ages, races, genders and sexualities while also showing up some stereotypes. 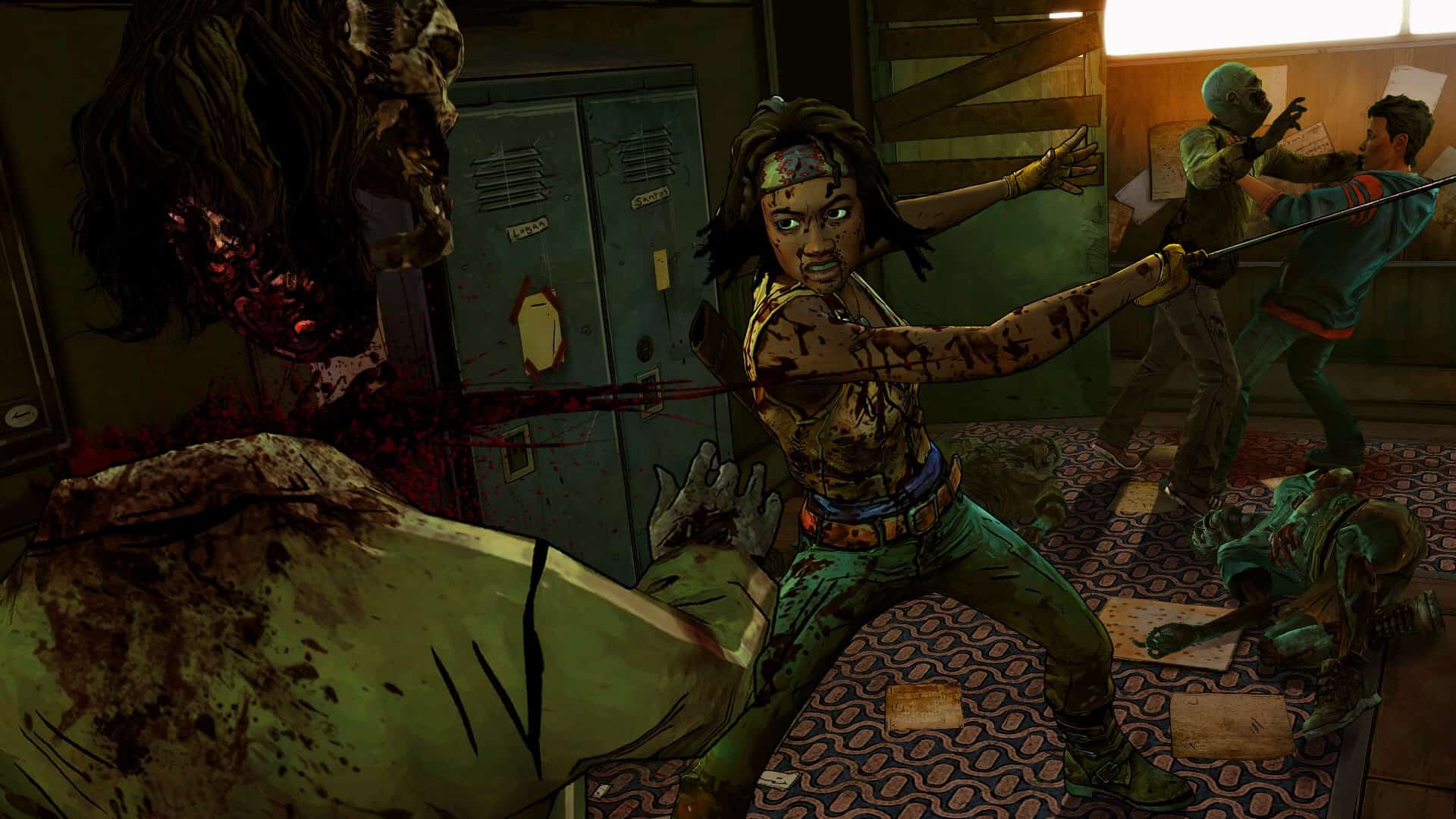 Over its short running time several new concepts are introduced that make for some interesting scenes. The opening features a blend of a present day zombie encounter with a flashback from Michonne’s perspective, book-ended with a stylish opening credit sequence that seemingly takes cues from the openings in Tales From the Borderlands. Most of the episode has a heavy nautical theme – Kenny would be jealous – with scenes in the water and on boats, which so far is an area of the franchise that hasn’t been covered. Otherwise the setup with a new villain and stale fight sequences make for a disappointingly lacklustre premiere episode that has a lot to do to regain attention in the next two episodes. Telltale pride themselves on the consequence of choice, or at least the illusion of it and so far the only big choice you make is the the one that precedes the credits as a cliffhanger. A single puzzle punctuates the break neck pacing, asking you to tune in a radio. It’s not particularly thrilling or vexing but it does for a brief moment allow the game to breathe. Several other sections give you a tiny set to walk around; a room, a boat deck but unlike season one where a lot of strength came from the ability to walk around and converse with the group – gaining optional insight into them as humans rather than plot devices, here you might be lucky to get an additional line of dialogue.

The substance of this Michonne spin off was cursed to be inconsequential, and though Michonne is an interesting protagonist, the surrounding red shirt cast fail to impress. Without the solid writing and warm characters of Tales From The Borderlands, all that remains is the frame under the wood and that wood has rotted away from wear.