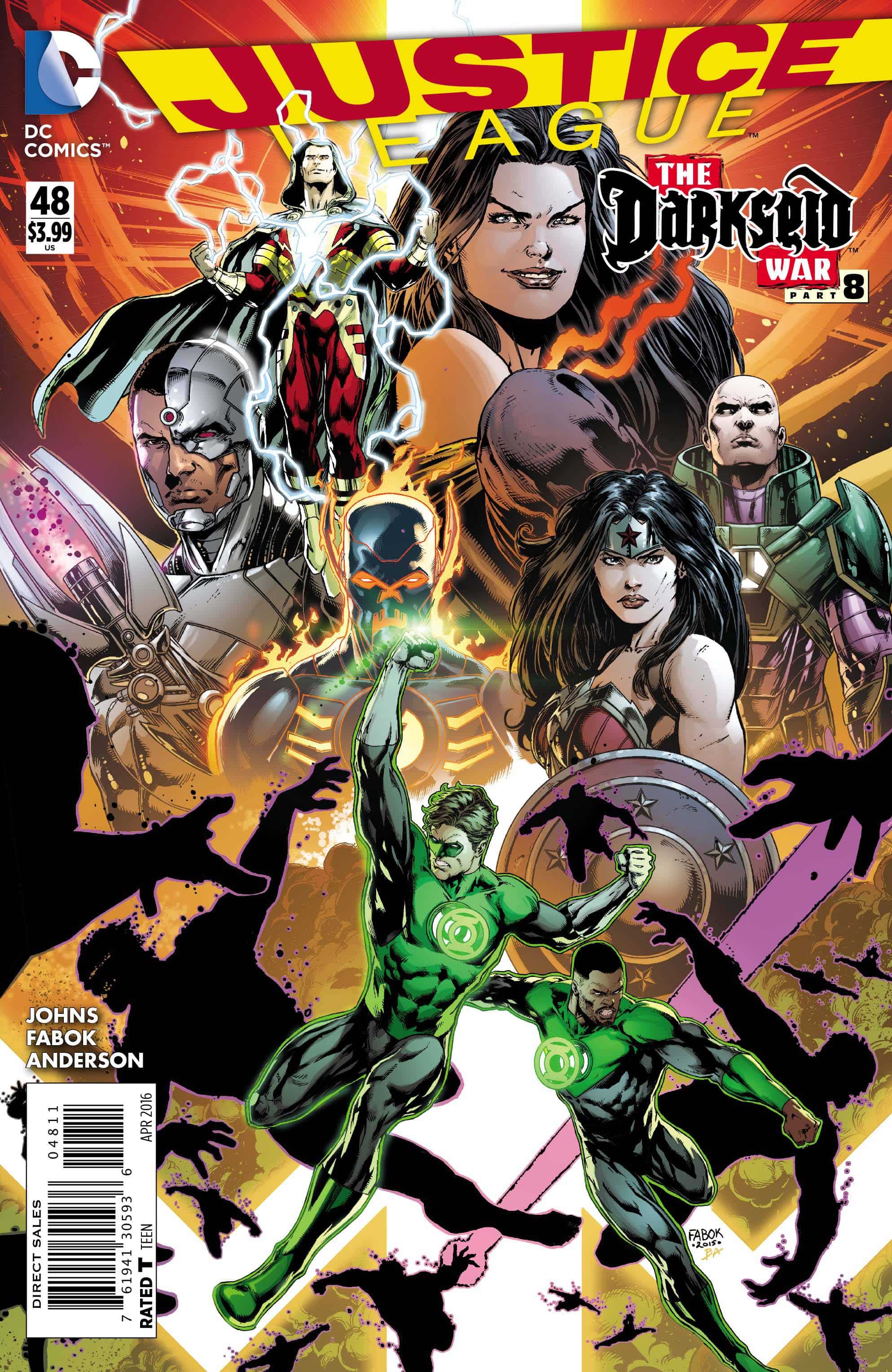 Justice League #48, which is part 8 of the DC Universe spanning event “Darkseid War, is winding up for a slamming finish. There’s a lot to be said for an event sized book being told mainly in one title and one-shots over the course of the run. Geoff Johns, Jason Fabok, and Brad Anderson continue to maintain a level of epic sized awesome inside this core title and not one part of this book disappoints.

With the end times slowly approaching and affecting all parties involved, the Justice Gods and Crime Syndicate embrace the saying, “the enemy of my enemy is my friend” and must join forces for better or worse. It’s here John plots out the calm before the biggest storm we’ve ever read in his Justice League run, and there is some noteworthy dialogue and key, detailed artistic touches that will have you inspecting each and every person on the splash pages from Fabok. The colors from Anderson give even the more darkly clad characters some resemblance of definition while making the more colorful cast members noticeable without taking over the entire page. Johns has been writing the Justice League since 2011 and the Crime Syndicate since 2013 and is in full control of the many heroes’ and villains’ voices. The fact that he gives each a moment in the sunlight before proceeding to the next story beat is remarkable.

The Crime Syndicate’s Ultraman’s development from whining, frail coward to a happt kryptonite obsessed junkie with a glare that could kill is a nice way to pave the way for the oncoming onslaught. Amidst the war-zone that is Gotham City, all of the action hits fast and is unapologetic when it comes to the scope because this is a story that neither the Justice Gods, Green Lantern Corps, and even the Crime Syndicate can cleanly walk away from. Seriously, Fabok and Anderson are completely in sync when it comes to creating moments of glory, surprise, and grim signs of what’s next. Wonder Woman has remained our sole narrator for most of the Darkseid War and rightly so. She is the God of War, and in the face of her team going through godhood, she’s absolutely in her element dire situations be damned.

Justice League #48 is lax on the Big Bad enacting his final Master Plan for dominance, Mobius makes an impression on one character. When issue #49 arrives, he will have his hands and Shadow Demons full with another. With the clock winding down on the future of the DC Universe, and just how the “Darkseid War” will end up affecting everyone involved, Geoff Johns, Jason Fabok, and Brad Anderson keep the momentum going full steam as Act 3 reaches its peak to a universe shattering finale.