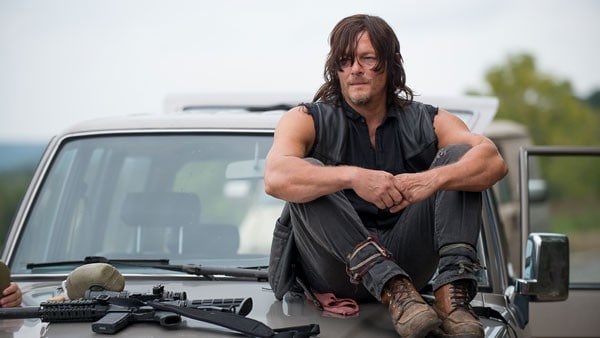 There’s an almost Waiting for Godot-esque quality to the back half of The Walking Dead‘s sixth season, or as least a whiff of Where’s Waldo. Negan has, by now, been spoken of around two dozen times, but by the end of “Not Tomorrow Yet,” there’s still no sign of him. This is not an enviable position for a series like this to find itself in, constantly wondering when we’re going to get the baddie of our dreams/nightmares. Nevertheless, “Not Tomorrow Yet” is a fine hour of TV, and a skillful blend of the more genteel recent flavor of The Walking Dead with a serious dose of deftly executed genre thrills.

Director and effects maestro Greg Nicotero returns for one of his most obvious showcase episodes ever – not only does he get an entire plot beat oriented around a hilarious, gory prop (the hunt for a credible substitute Gregory head), but he gets to stage an old-school extended action setpiece aided by some of bear McCreary’s most John Carpenter-esque work to date. Unfortunately, the entire affair is hobbled slightly by its placement in the season. If you’ve seen enough TV, you know that with four episodes to go this season, this simply isn’t going to be the week that anyone we actually care about bites the dust, which undercuts the tension of the compound sequence somewhat. (It’s hard to shake the feeling, after several seasons of this bifurcated 16-episode strategy, that it’s time the series went for something a little more modest and manageable in the service of more consistent storytelling.)

Still, there’s much to like here, even before we reach the compound. Remember when this was a series that we all (rightfully) ragged on for its nagging tendency to ice its black characters before they have a chance to even distinguish themselves? Gradually, Scott M. Gimple has worked to make The Walking Dead not only as one of TV’s most inclusive series, but as one keen to subvert long-held racial and gender stereotypes, and “Not Tomorrow Yet” stands as a quiet showcase of that fact. In Carol, we have a tough-as-nails middle-aged woman whose mercilessness and drive to do what’s necessary to survive are explicitly presented as part and parcel with  – as opposed to in spite of – her experience as a mother, as her conversation with Tobin (Jason Douglas) makes very clear. “Not Tomorrow Yet” takes one more step, though, and also lets her and Tobin share an attraction, something else we basically never get to see occur with 50-year-old women on television. (Or 40-year-old women on television, for that matter.) “Not Tomorrow Yet” also showcases not one, not two, but three black male characters expressing some level of reticence in taking the path of violence. (For those of you counting at home, that’s Heath, Morgan, and Gabriel.) And the series now also boasts an interracial romance between main characters (Rick and Michonne) and a lesbian couple (Denise and Tara). Not too shabby as far as inclusion goes, especially considering how tiresomely, monochromatically macho the series was a few seasons ago.

The real test going forward will be seeing how The Walking Dead chooses to leverage its newfound diversity and (apparent) humanist streak as we approach what’s sure to be the next collective test of its characters’ will to keep going. As the title hints, “Not Tomorrow Yet” is a tense pit stop on the way to whatever form their future takes, a showcase for the skills they’ve accumulated over their rough years but also an indicator that they may simply be in over their heads. There’s a satisfaction in seeing Rick and the gang act decisively and with a drive and a sense of purpose undimmed by internal squabbling, while still finding room for angst and disagreement. (Imagine for a moment just how long and drawn out that town-hall sequence would have been back in the Darabont or Mazzara eras of the series.) “Not Tomorrow Yet” finds a rare balance between mercilessness and tenderness, and even makes time for a joke or two – it’s almost as if The Walking Dead is, for once, actually making an effort to showcase the people who aren’t dead yet.

Glenn and Heath’s stabbin’ tour of the compound – capped off by a Faces of Death-style Polaroid montage that comics fans should particularly enjoy – makes up the most stressful few minutes the series has conjured in quite some time.

Seriously, everyone is coupling up on this show now and it’s goddamned adorable.

…that is, everyone but Abraham and Rosita, who are kaputt now thanks to Abraham’s realization that she’s “not the only woman in the world.” Even for The Walking Dead, that’s a bit harsh.

Fun fact: Daryl slicks another quarter-ounce of chicken grease through his hair with each new episode.