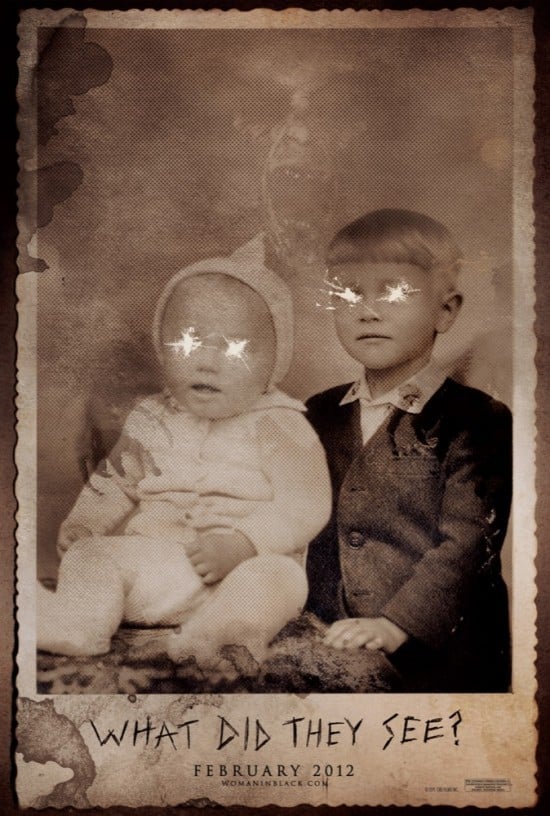 The Woman in Black
Written by Jane Goldman, from the novel by Susan Hill
Directed by James Watkins
UK / Canada / Sweden, 2012

Nowadays, “old-fashioned” is generally meant as a compliment in discussions of contemporary movies, in conjunction with an overarching sense that new films – particularly mainstream films – are not as sharp or high-minded as their counterparts from decades past. In the case of The Woman In Black, though, we can safely revert “old-fashioned” back to its traditional, pejorative meaning; hoary, creaky, outdated, too-familiar. The film’s one-sheet is more effectively creepy than the film itself.

This is doubly disappointing considering the source; James Watkins previously helmed the truly vicious chavsploitation thriller Eden Lake. That film took a familiar genre touchstone – the killer-kids flick – and found a novel, relevant spin. The Woman in Black, meanwhile, is entirely content to recycle plot points seen countless times, and its unconvincing turn-of-the-last-century setting might explain Watkins’s comparative alienation from the material. In his first prominent post-Potter role, Daniel Radcliffle toplines as Arthur Kipps, a lawyer who’s been assigned to tidy up the affairs of a lonely estate in some remote corner of the English-speaking world, a dust-ridden mansion whose only point of access is a lonely road which becomes completely submerged when the high tide arrives. In the nearby village, denizens speak in hushed tones about a terrible tragedy that befell the estate’s former occupants, and only one (Ciaran Hinds) greets Kipps with anything other than bald contempt. With his help, Kipps resolves to set the house in order, spirits and all.

Not unlike Ti West’s similarly misbegotten The Innkeepers, Watkins’s film attempts to resurrect age-old haunted-house tropes, but at least West’s movie felt aesthetically novel in some respects. By contrast, Woman cribs scary-lady framing from decade-old J-horror, only dulled with a sense of numbing repetition; at least a dozen of the film’s creep-out moments consist of placing Radcliffe’s face in closeup to one side of the frame, while a shadowy entity slinks along the background in varying degrees of focus. The “mysteries” at the heart of the estate unravel plainly, with no palpable sense of revelation. (Worse, the film repeatedly shows us the same information, as though we’re too dense to piece together the tale in one pass.) Perhaps most cripplingly, Radcliffe feels like he’s play-acting; all determination and generic torment, he’s a difficult figure to become invested in, yet he’s in nearly every frame. Kipps never feels like more than a collection of attributes.

The stretches of Woman that almost work do so purely on visual terms. Its gothic vistas are presented with a distinct lack of CGI goosing (at least not of the detectable sort); serious credit is due to DP Tim Maurice-Jones. The murky environment is put to good use in a late marshland sequence that, while hardly tense, at least threatens to plunge the film into the realm of the memorable. For the most part, though, Woman is content to recycle with class. It’s unfortunate that we already know Watkins can do better.