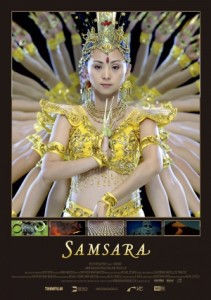 What is humanity’s relation to the world and to itself? What is humanity’s legacy culturally, spiritually, architecturally, politically and how has that legacy changed throughout the ages? There is no single answer to any of those questions, but the exercise of pondering on the matter should provide enough food for thought to last a life time and even then some. They are grand scale queries which require exhaustive research and documentation, practices which historians, philosophers and other such professionals devote their lives to. Documentary film is ripe for capturing images and thoughts which can assist us in coming to terms with ourselves. Acclaimed director Ron Fricke, a filmmaker whose output is better appreciated for its quality rather than its quantity, returns after a prolonged absence, one that be explained by the fact that he was working diligently on Samsara.

Samsara is akin to stream of consciousness, where each successive image and sequence is connected to the last, albeit not always for the clearest reasons. Much like with Ron Fricke’s previous documentary of epic proportions, Baraka (1992), this new outing delivers patient audiences with a tableau of sorts, a window unto the world at large, where and how man fits in, questions which require glances at historic architecture, said architecture’s political and religious significance, Mother Nature’s love-hate relationship with Earth’s dominant species, the multiple, staggeringly varied cultures which characterize various countries, regions, communities, and so on and so forth. For all intents an purposes, and in a possibly clumsy attempt at making a comparison, Samsara is like a 90 minute version of 100 degrees of separation. Fricke, having traversed world over a five year period, constructs a collage of vignettes, sans narration, some barely a minute in length, but each revealing something about what it means to be human. No explicit questions are asked, nor does any one individual or group captured on camera theorize the matter, yet it is abundantly clear that, apart from its visual appeals, the film is intended to be profound and hopes to get viewers thinking. ‘…some of the absolute best moments in the film rest on the impact of pictures and the resulting immediate, awe inspiring reactions than in… the commentary that the director may be trying to transmit to the audience.’

On the topic of visual allure, much has been written and said about the filming process, a painstaking endeavour which ate up a lot of director Fricke’s time. Those anticipating the movie’s release in their market (it is receiving the so called ‘roll out’ release, by which it opens in only a select few additional markets every couple weeks) need not fear: they are in for a real treat. Once again, the images are presented in such a manner as to provoke thought, but for those who are especially giddy about grand scale, superbly shot movie making first and foremost, it seems impossible that Samsara will disappoint. In fact, it can be argued that some of the absolute best moments in the film rest on the impact of pictures and the resulting immediate, awe inspiring reactions than in the subtle, and other times less subtle, commentary that the director may be trying to transmit to the audience. One example is very early in the film when a class of young monks in apprenticeship, children really, who gather around on their knees and hands around what looks to be drawing of some sort. The picture frame captures the small group from a higher angle, looking down on them as each child seems to be touching and observing the brightly coloured piece of art under their noses. Cut to a far more intimate close up shot of one of these youngsters as he is rhythmically tapping a tiny metal cylinder case, out of which pours coloured sand pellets , hundreds of them, thousands of them. The kids are in fact drawing the complicated image with dyed sand!

There are plenty of such singular and juxtaposed images which cause raw emotional reactions. As a beautiful, luxurious tour around the world, the film is an opportunity for viewers to discover sights they might never have otherwise. If there is a single downside to the visual presentation, it is the fact that Samsara was captured on 70mm, yet will seemingly only play on 4K digital projectors during its limited theatrical run. It does not appear that any specific 70mm screenings are in the cards at all, which is a little odd considering the recent interest in bigger and better ways to present films at cinemas, 3D and 70mm IMAX being hot topics, the latter which has even earned a considerably warm welcome from general movie goers and critics alike.

Discerning what Samsara has to say as a piece of art is a far taller challenge than singing the praises of the bravura cinematography on display. As has been mentioned by the filmmakers themselves, the picture has no narrative to offer, other if one is willing to describe a series of sometimes directly connected, other times very loosely connected images and episodes as the ‘narrative of Man’s place on Earth.’ What comes off as having greater impact is merely the many ideas and framing devices with which Fricke opens the window of the planet before our very eyes.  Consider the  stunning landscape images in which the old meets the new, in which man made creations, such as monasteries, rest in a vista of untamed, natural splendour, peculiarly designed and painted hotel lobbies are shot in ways so as to make them appear as psychedelic mazes rather places of rest and tranquility. ‘Consider the  stunning landscape images in which the old meets the new, in which man made creations, such as monasteries, rest in a vista of untamed, natural splendour…’

Fricke’s editing process ensures that, as previously mentioned, each brief segment evolves out of its predecessor, inspired by a visual cue in most instances, while in some rarer instances building on a narrative of sorts. It is in the latter parts where Samsara‘s initial quality to inspire and provoke out of a more structurally pure sequence of images lessens to an extent. The finest example is when the film takes the audience on a journey to observe how pork and beef arrive as neatly packaged parcels at the supermarket or as tasty little patties at the local fast food joint. Piglets are nourished by a mother locked into position at the animal factory, slabs of animal innards are transported on hooks, hacked into pieces , etc. Few would disagree that, as a topic for a documentary, the material is uninteresting, only that plenty of such films have already been made, some quite competently studying the subject matter. There is another brief sequence during which the theme shifts to war and guns which also suffers from a sense that maybe Fricke indulges too much and cannot prevent himself from being too ‘on the nose’ as the saying goes. And yet, even then, Samsara manages to pull out a fine golden nugget with, for example, an unfortunate young Black man being buried in a casket carved in the shape of a pistol, or feature hundreds of inmates perform a dance number à la Step Up.

Anyone who has seen a trailer, a still, or a poster and had their curiosity aroused owes it to themselves to check the film out. Granted, it is only receiving a limited theatrical release (an entire year after premiering at TIFF in 2011, another indication that it is not high on the list of priorities), thus making it an near impossibility for many, which is greatly unfortunate. Nevertheless, Samsara is a simultaneously a great documentary and a great work of art, a find in the genre.