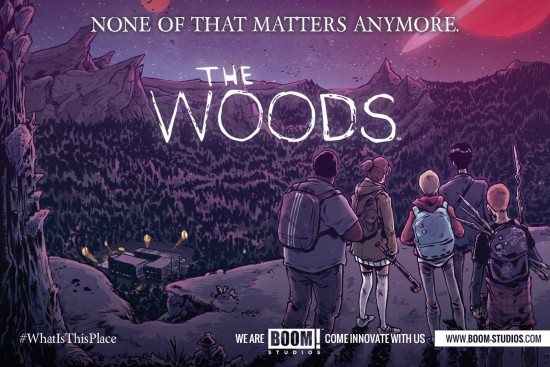 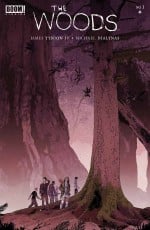 Set in Bay Point Preparatory High School in suburban Milwaukee, Woods pays homage to several genre faves, notably Sheltered, and Revival. Fans of James Tynion IV (Batman Eternal, Red Hood and The Outlaws) will be eager to read his first original comic series, but they might also be somewhat letdown. The best way to describe the first issue is to imagine a blend of Stephen King’s The Mist and The Faculty (written by Kevin Williamson and directed by Robert Rodriguez), only minus the dark comedy and social commentary. 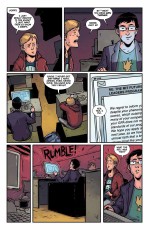 Set mostly in and around one location in a small-town, 437 students, 52 teachers, and 24 additional staff vanish without a trace. Not much is revealed here, but Woods does offer swarms of mutant-like bats ripping apart the student body. If this were a movie, it would have the look and feel of a film which belongs in the straight to video category, but with just enough cheap thrills to keep genre buffs entertained. What this first issue does well, is leave many questions unanswered peeking the curiousity of readers to return at least, for one more instalment: Where did the entire high school population vanish to? Why are they there, and what are these creatures flying about?

Amidst the strange occurrences, flashing lights, perilous creatures and purple sky, Woods is weighed down by introducing a flood of high school stereotypes, clichéd phrases and clumsy dialogue which undermines any built up tension. Using the labels provided for the series’ promotional material, those characters include: Adrian Roth, (the genius), Karen Jacobs, (The Screw-Up), Sanami Ota (The Control Freak), Calder Macready (The Lunatic), Benjamin Stone (The Wallflower), Isaac Andrews (The Wimp) and finally, principal John Beaumont. It’s like The Breakfast Club minus detention.

The dialogue is bad and the premise is familiar, but the central mystery is what will have this critic coming back 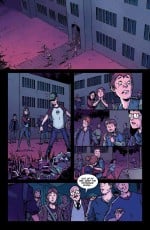 for more. Hopefully the writers will slowly pull back the curtain, and restrain from giving too much away, too soon.

The real saving grace however, is the artwork. Almost every frame, from the early double-page spread to the last panel is heightened with shades of purple, blue and black, providing a real sense of doom. It doesn’t take long before the bright white pages flip by, and your staring into a dark sinister landscape.

Woods unleashes a menagerie of otherworldly predators, cooky characters , dark visuals, and suggests there is something more sinister beneath the surface; We can only hope.

This is our future we’re fighting for.