Among the many recent and upcoming highly anticipated revivals, the return of The X-Files has been one of the more exciting things about television in 2016. The original series, created by Chris Carter, was a sci-fi series worth obsessing over. What it lacked in consistency and subtlety it made up for in charm and dedication to its premise. Unfortunately, the miniseries/season ten premiere forgets what was fun about The X-Files and tries to make up for it by being loud and vague.

For all its lack of narrative nuance and depth, the original The X-Files was so engaging because of how contagious its style and tone were. Maybe the dialogue didn’t make a whole lot of sense when it was trying to explain certain aspects of the series’ mythology, but leads David Duchovny and Gillian Anderson sold the hell out of it and made chasing down leads on aliens feel like putting together a satisfying jigsaw puzzle. “My Struggle” fails to recapture that excitement by speaking in vague and/or confusing circles that obfuscate in order to cover up a thinly drawn plot. It’s the equivalent of that Spaceballs bit where Dark Helmet tells Lone Star “I am your father’s brother’s nephew’s cousin’s former roommate.” “What’s that make us?” Lone Star (and The X-Files’ plot) asks back. “Absolutely nothing.” When newcomer Tad O’Malley (Joel McHale, Community) and Mulder go off on conspiracy rants, the scenes are accompanied by a bombardment of images of war and government agencies doing apparently subversive things. It’s very in-your-face and not at all easy to follow, because, really, what is any of this even about?

“My Struggle” tries—desperately—to convince the audience that the idea behind this revival is that Mulder and Scully’s history working on the X-Files has all been an elaborate wild goose chase to take attention away from what the Big Brothers of the government are actually doing (Trying to take over the world? Impregnating Annet Mahendru’s Sveta and stealing her children?). And that idea in and of itself is intriguing enough. It’s a quick slate-cleaner to get the ball rolling with the series revival. But none of it is convincing or, more importantly, interesting. The unfortunate side effect of that is how attention is taken away from the main draws of the series for the 2016 audience: Mulder and Scully. At the very least, it should be enjoyable to be spending time with two of television’s most iconic detectives. Anderson continues to do fine work, elevating the character far beyond the page, but Duchovny is noticeably spinning the acting wheels while chewing sunflower seeds in his head. One scene in particular has Mulder grabbing Scully by the shoulders as the two passionately debate the veracity of what’s going on around them, and Duchovny looks about as invested as the audience should be with the episode at this point: not at all. 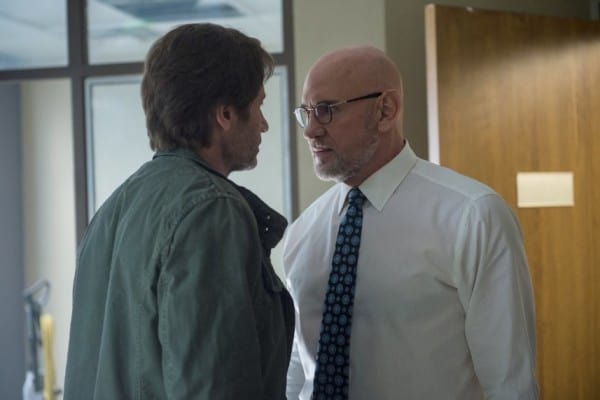 So, if this premiere isn’t working on these levels, is it working at all? Is it even worth watching? The answer to those questions is a qualified yes. Despite its shortcomings, “My Struggle” still retains some classic The X-Files charm. The familiar opening credits and stylization of the establishing text on the screen work perfectly at making this feel like an episode of a show you used to love. And Mitch Pileggi as Walter Skinner is always able to make scenes pop with that boiling stress just under his skin that gets aggravated by Mulder’s nonchalant attitude towards protocol (also, William B. Davis makes a fun cameo as The Smoking Man in the episode’s final scene). But if you’re a viewer coming to The X-Files completely cold, having never seen an episode of the original series, there isn’t much that this new version can offer you in an incredibly busy TV landscape. Undoubtedly, there are better conspiracy-driven series (Mr. Robot) and better sci-fi series (The 100 and Orphan Black) that make this version of The X-Files look and sound obsolete.

And it’s those small touches that end up really mattering. Little decisions, such as when to use practical effects instead of special effects, add up. Whereas the older version of The X-Files would be content to suggest the presence of an alien through shadows or bright lights or tremors, “My Struggle” opts for huge explosions and blatantly showing an alien on-screen, eschewing all the mystery that one might expect from this brand. Those rather unfortunate details eventual bring down a premiere with a lot of potential. With a commitment to bringing back the mythology versus monster-of-the-week structure, the remaining episodes should offer a variety of executions, so don’t expect the premiere to be a defining episode. But it’s a shame this one, which does a good job of reminding viewers of Mulder’s personal stake in this whole thing (namely, his sister), can’t come together in a coherent or worthwhile way.