The best part about being a film fan in a big city is that you are exposed to so many films that you would have otherwise never heard of. Obscure arthouse releases, strange french films and more film festivals that you can shake a fist at, it’s rare that I am able to predict with any accuracy my year end list. Even looking at my attempt to put together my most anticipated films of 2011, only three actually end up on my year end-list, the same amount that were shelved or pushed to 2012. It’s nonetheless a fun experiment, a chance to have a look at the year ahead. 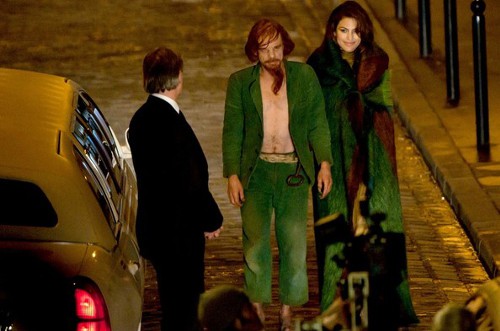 It has been over ten years since French filmmaker Leos Carax, best known for Mauvais Sang, has released a film. Always a daring filmmaker, there is no surprise that his new film treads new ground, exploring space and time through a film about a characters parallel lives. From its rather unconventional cast (Eva Mendes, Kylie Minogue and Michel Piccoli) and the few pictures that exist of Mendes in what appears to be some Ancient Grecian or Roman garb, this will prove to be one of the more interesting films of the year. 22- The Place Behind The Pines

Blue Valentine was one of the most hard-hitting films of recent years, so for all of those who appreciated both the intense emotional experience and the strength of Derek Cianfrance’s daring formal structure, they will no doubt be excited for his new film which reunites him with Ryan Gosling. It doesn’t hurt that this film also features motorcycles predominantly, which happen to be my most recent film fetish.

Synopsis: A Motorcycle stunt rider considers committing a crime in order to provide for his wife and child, an act that puts him on a collision course with a cop-turned-politician. Moonrise Kingdom seems to be a return to familiar grounds for Wes Anderson, whose biggest detractors suggest that he has yet to demonstrate any real diversity in his films. I’d argue otherwise, especially after Fantastic Mr. Fox. wherein Anderson not only desmonstrated a certain amount of flexibility but proved that his idiosyncratic style still has a lot of mileage (not that I personally had any doubt).

Synopsis: A pair of lovers flee their New England town, which causes a local search party to fan out and find them. Another underrated French filmmmaker, Benoi Jacquot, is relatively unknown amongst even the most knowing film audiences. His most recent film will no doubt find a wider audience though with both Lea Seydoux and Diane Kruger bringing to the screen the last days of the French revolution from Marie Antoinette’s POV. This is hardly the first film to tackle this subject, but it will prove to be a new take on an old subject. Jacquot is no stranger to the period piece, and this won’t be stuffy Oscar fodder.

Synopsis: A look at the relationship between Marie Antoinette and one of her readers during the final days of the French Revolution.

One of the very last filmmakers of the French New Wave to be still working, Alain Resnais is as vital as he was twenty, thirty and forty years ago. He may not have moved to the same extreme as Jean-Luc Godard, whose recent Film Socialisme tested even the most seasoned film audiences, but he remains creative, challenging and adventurous with each new adventure. His previous film, Wild Grass, was a convention-bending romantic comedy that was interesting enough to warrant an act of faith that his new film has a good shot at being one of the year’s very best.

Synopsis: Loosely based on the play Eurydice by Jean Anouilh, the story revolved around a group of actors who have gathered in the hosue of a deceased playwright for the reading of his will.

Another filmmaker who could remake Master of Disguise and I would, on an act of blind faith, anticipate it with the same enthusiasm as an original screenplay. Michael Haneke can do no wrong as far as I am considered and is probably the definitive filmmaker of the 21st century. Amour reunites him with William Shimell of Copie Conforme and Isabelle Huppert, perhaps the greatest working actor; this is a film that cannot fail.

Synopsis: A retired couple deals with the aftermath of the wife suffering from a debilitating stroke

John Hillcoat may not have totally hit his stride yet, but he has demonstrated a huge amount of potential and consistently makes good pictures. Wettest County combines his talents, a script by Nick Cave and some of the best working actors in a depression era Southern Gothic work. Hillcoat’s grimy aesthetic seems perfectly suited to the material and I am hoping that he is able to capture a strong sense of place.

Synopsis: Set in the Depression-era Franklin county, Birgini, a bootlegging gang is threatened by authorities who want to cut their profits. Spike Lee may not always make great films but it’s rare that they are not worth seeing. The film’s synopsis definitely catches my interest, as do the first few images that have been published from it on the web. As it is going to be premiering at Sundance we won’t have to wait too long to get the buzz on this one, but what little I know of it so far has definitely piqued my interests.

Synopsis: When his mom deposits him at the Red Hook housing project in Brooklyn to spend the summer with the granfather he’s never met, young Flik may as well have landed on Mars. Fresh from his cushy life in Atlanta, he’s bored, friendless, and his strict grandfather, Enoch, a firebrand preacher is bent on getting him to accept Jesus Christ as his personal savior. Not only was I a huge fan of Atonement, but I was also a huge fan of Pride and Prejudice. Joe Wright may not always succeed, but when he does he is able to create strong and exciting images and navigate sometimes very complex formal and narrative structures, transforming into something totally cohesive. Though Keira Knightley may be the go-to-girl for British period pieces these days, I truly think she is one of the most talented young actresses working today and can make, rather than break the very emotionally and morally complex character of Anna Karenina.

Synopsis: Trapped in a loveless marriage, Anna, looks for a better life but finds only a more complicated one. Audiences in the UK and a few festivals in North America have already had a chance to see this one, but for the rest of us living in the “real” world our first chance to see this one comes in 2012. Terence Davies is a really interesting filmmaker, whose early films were extremely personal but is probably more famous for literary adaptations like House of Mirth. The latter remains one of the best adaptations of a work depicting the early part of the century, and it is especially in the tenderness in which he is able to evoke desperation, romance and longing that sets him apart as a filmmaker.

Synopsis: The wife of a British Judge is caught in a self-destructive love affair with a Royal Air Force pilot.

Special Mention: We could have easily made a list of 50 highly anticipated films but we wanted to keep it down to 30. Here is a list of soem other films we are eager to see.

Salmon Fishing In The Yemen