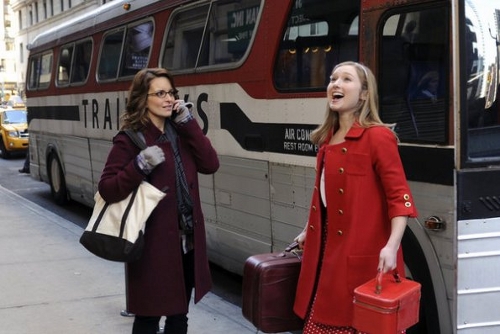 We begin tonight with a refreshingly great episode of 30 Rock, possibly the best they’ve done in years. Turning to current events for the second time this season, the show finds significantly more success dealing with Alec Baldwin’s mayoral aspirations than it did Tracy Jordan’s homophobia. It opens with an amusing gag featuring Liz on the subway and a brief musical bit with a prostitute joyous upon arrival to New York City. That neither of these are mere throwaway gags and both factor into the episode that follows goes to show just how tight the writing on this episode is.

30 Rock more or less functions as a finely tuned joke machine and a good episode can usually be defined as one in which work than fall flat. There are so many successful gags in tonight’s episode that there isn’t enough room here to recount them all (a young Tracy Jordan in a Chewbacca costume made of old hair extensions is bizarrely endearing).  Subway humor can feel so tired, and 30 Rock in general has been just that of late, that it’s surprising just how much vitality the scenes with Liz possess, especially when she discovers being dressed as a bag lady is the key to unlocking the city.  Her attempts to “sink into the filth” nicely mirror Jack’s attempts at mounting something of a reverse-Occupy Wall Street campaign for mayor, with visions of a private-sector police force manned by millionaires. The rooftop set piece they build to with Baldwin’s billionaire Batman squaring off against Liz’s vagabond Joker is pretty great stuff, even if it seems to be coming a few years too late. The Hans Zimmer inspired scoring really brings the scene into focus and provides an opportunity to call attention to Jeff Richmond, who is in many ways the most consistent crewmember in a role that with a few notable exceptions (Michael Giacchino and Bear McCreary jump to mind) is often overlooked, that of the TV composer. His airy variations on the “Downtown” motif are always a delight and whenever he’s asked to step up to the plate he seems to knock it out of the park.

When looking at what works here compared to previous episodes this season it seems notable that there is nary a sign of Frank, Lutz and Toofer, who have been featured in several of the seasons weakest subplots. Kenneth is also in the background if still a Page, which continues to make “Today You Are a Man” feel like an aberration. More importantly, everything ties into a central theme, which seems to be the extremes people go to to cope with what NYC considers normal. This is succinctly punctuated by Jenna, who is significantly more tolerable and bearing a greater sense of purpose with Paul’s return this week, as her subplot folds into the main thread and we see the prostitute of the cold open has been solicited by Mr. Met. Again highlighting just how sharp the writing staff is this week bringing everything together in the end. Let’s hope it’s not an outlier, because this was a nice reminder of a time when 30 Rock was one of the most reliable comedies on TV. If there is one comedy on TV that is capable of consistently outshining Parks and Rec, that comedy is Louie. So when it was revealed that Mr. C.K. would be returning to Pawnee (he left the show in season 2 to bring us his own unique take on the sitcom) expectations ran rather high, and it’s a relief to report that “Dave Returns” rises to meet them. It’s easy to overlook just how talented of a performer Louis C.K. is, and perhaps it stands out more tonight than it did in the past given that he’s had two seasons on FX to hone his chops, but the stilted borderline police-speak Dave conducts himself with is done perfectly and is consistently hilarious.  Also amusing is Ben’s continued discomfort around police, inspiring what initially seemed like a misguided fear of Dave that ends up being somewhat warranted.

In the last episode that aired, two weeks ago, we saw the beginning of the unlikely courtship between Tom and Ann. Tonight’s episode goes a long way towards making what felt weirdly appropriate even more so while reaping plenty of comedic rewards along the way. The entire campaign song subplot works well enough to keep the episode from feeling lopsided in Louis C.K.’s direction, but of note is the return of Duke Silver, in his first appearance since season two. Which generates some amusing gags as April helps Ron to keep the others from stumbling upon all the Duke memorabilia scattered about, further deepening the bond between the two of them.

Tonight’s episode is written by Harris Wittels, one of the show’s most consistent writers (see “94 Meetings” and “Media Blitz”) and directed by Robert B. Weide, in his first foray into episodic television outside of Curb Your Enthusiasm. It’s always difficult to detect a directorial signature when someone of note finds their way onto a network sitcom (Parks has previously employed Paul Feig, Ken Kwapis and Nicole Holofcener on two occasions), but “Dave Returns” is one of the more cohesive episodes Parks has served up in a season that has struggled with that at times. For much of the episode it appears that the rest of the cast may have to sit this one out, until they slowly begin to shuffle in, leading to the dinner party finale that serves up many of the episode’s biggest laughs. Lana’s realization of what really happened is also quite effective, calling to mind the ending of The Usual Suspects in many ways, yet serving to elevate the material rather than deflate it with gimmickry. This is a show that’s gone some pretty dark places, and perhaps its just the dramatic way in which it’s revealed, but Malory’s assassination of the Prime Minister and the subsequent shrewd cover-up might represent a new low for ISIS.

Given the outlandishness of the proceedings (and this reviewer’s predilection for a good whodunnit) “Lo Scandolo” isn’t quite as entertaining as it feels like it should be. Perhaps it is just outshone by the strength NBC’s offerings tonight but it felt like a slightly below-average episode of Archer. With some kinks that needed to be worked out (perhaps not the best metaphor for this particular script) and a few spots that seem dead in comparison to the rest of the episode (again with the inappropriate metaphors).

Note: I watched Unsupervised again this week but I really don’t have much to say about it that I haven’t already covered in previous week’s write-ups. So unless there are several of you out there that were getting something out of the write-ups I’ll be dropping it from the column for the time being.