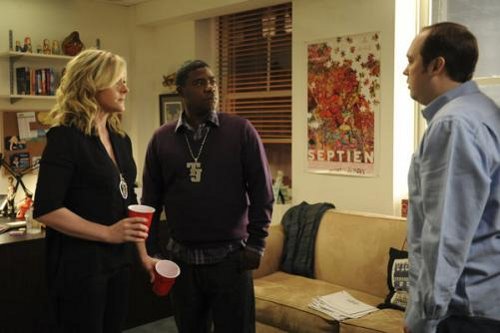 “Alexis Goodlooking and the Case of the Missing Whisky” isn’t a great episode, but given the way the season began, average 30 Rock is nothing to take for granted at this point. The title comes from tonight’s Jenna plot, in which she channels a role she had playing a TV detective (who was good looking and good at looking for things) to figure out who drank Pete’s whisky. Helped along by Tracy Jordan in the spirit of the Magical Negro, this plotline is a lot of fun. Jane Krakowski seems excited to have something to do outside of exploiting her character’s vanity and it makes you wish the writers thought outside the box with her more frequently.

Jack attempts to teach Kenneth the ropes in the business world, finally addressing the fact that he is no longer part of the Page Program (despite his seeming to be just two weeks ago). As far as Kenneth goes, this is one of the more tolerable bits, but it’s hard to argue that putting his character in the forefront hasn’t hurt this season. The weak spot, for the second week running, is Liz. It doesn’t help that she’s paired up with Frank, whose one-notedness is highlighted by the fact that he’s still wearing trucker caps with silly catch phrases on them, a joke that stopped being funny at some point during the first season, if it ever was. This does bring back Susan Sarandon as Frank’s girlfriend and watching her go toe to toe with Patti LuPone has its moments (not to mention the disturbing climax this all builds to), but having Liz pose as Frank’s girlfriend feels a bit too conventional for this show. It’s amusing to consider just how big a deal City Council elections apparently are in Pawnee. Most of us live in (or at the very least near) cities, presumably with their own City Councils, but when is the last time you remember coming across City Council election coverage? It’s usually the type of thing that gets buried in a section of the local newspaper that gets tossed aside in pursuit of crossword puzzles and box scores. In Pawnee, it gets prime time televised coverage, and Perd Hapley, presuming his nickname isn’t formal enough for the occasion, becomes Perdric L.

We also have Bobby Newport’s dad spending a quarter million dollars to fly in a campaign manager from Washington, DC. Jennifer Barkley is an adept adversary for Leslie, and the fact that she is so likable when she isn’t in campaign mode is a nice twist. The disconnect between her public and private personae makes for a nice juxtaposition with Leslie, in whom the two are intertwined at the very core of her being. The two are at odds trying to obtain the senior vote in Pawnee, which apparently requires courting Carl Reiner’s Ned Jones.  This provides some fun back and forth that is capped with his saying ‘he’s a young, flat man.’

Meanwhile, the people in the Parks Department are addressing the fact that Pawneeans’ voracious appetite for election coverage is nothing compared to the enthusiasm with which they approach drinking fountains. Putting, as they do, the entire spout in their mouths. Without Leslie to guide them, this devolves into a hilarious scene- everyone engaged in a water balloon, while Tom cowers under his desk shouting, “Everything I’m wearing is suede!”, all punctuated with Andy’s exquisitely timed kamikaze attack on Chris. So yeah, another great episode of Parks and Rec. “Crossing Over” is what feels like the first substantial Archer episode in quite some time. This isn’t a dig on season 3, as substance has never been Archer’s focus, but this is the first time since “Heart of Archness” that it feels like what’s going on has ramifications that extend outside the bounds of the episode. Bringing back Nikolai Jakov and Barry Dillon (who in bionic form has ousted his predecessor as head of the KGB), it taps into Archer’s mythology in a way the show hasn’t since the aforementioned three-parter.

Oh, and Archer sleeps with Pam. Who is apparently “some kind of chupacabra, but for dicks.” They sleep together several times throughout the episode and Archer’s amazement in the wake of Pam’s sexual prowess becomes funnier with each successive iteration, reaching critical mass when Archer realizes his addiction to Pam’s sex is responsible for the death of the man who was possibly his father.

This is probably the strongest episode of Archer since “The Limited,” which is notable because it seems primarily to be set-up for next week, possibly leading into the two-part finale to follow. Even by Archer standards, there are a lot of quotable lines (chicken and waffles anyone?) and callbacks to running jokes. The episode opens with Archer recalling the funeral of an ISIS co-worker, who is never revealed (but has a wife, which seems to rule out the core cast), so we’ll see if that’s touched on in weeks to come, along with Bionic Barry’s secret plan.