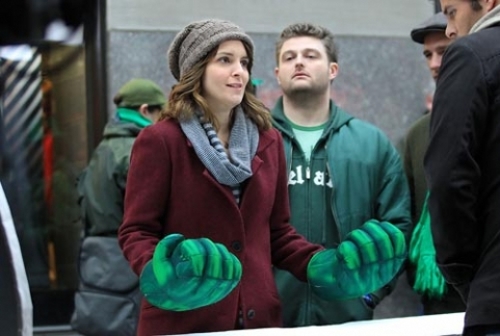 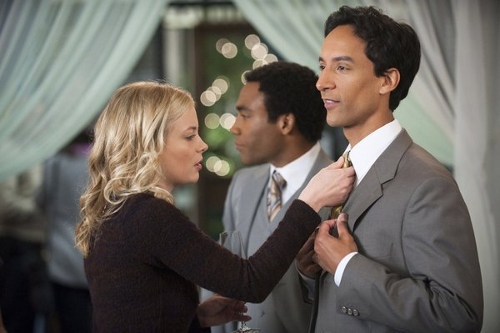 So, Community’s back. Maybe not with the high concept episode with meta-commentary on its absence fans were hoping for but a solid half-hour none the less. Community has always been an uneven show, tending to balance its crazier episodes with more down to earth spins on general sitcom tropes. When it comes to the former, even when it misses its worth watching just for the level of sheer tenacity on display and when it hits there is no better show on television (see “Critical Film Studies”).  As for the latter, well, it seems that for every “Mixology Certification” we get two like the one where Chang moves in with Jeff. “Urban Matrimony and Sandwich Arts” is definitely one of the stronger “sitcommy” episodes the show has aired.

It would be easy to attribute this praise to absence making the heart grow fonder, and that was probably the case with 30 Rock’s season six premiere but it didn’t make “Biology 101” any better (Cougarton Abbey aside). The point is, there’s a lot here to appreciate on its own merits. We have Troy and Abed pretending to be normal (is there a better way to skewer “normal” people than Danny Pudi’s delivery of “This shrimp is to die for!”), Pierce inventing a trouser bench and one of the stronger plots the show has done involving Shirley.

Pretty much everything centers around her second wedding with Andre. Much like “Andy and April’s Fancy Party” on Parks and Recreation last year, Urban Matrimony manages to find a heart at the core of what has become a rather overdone trope. Jeff’s toast and Britta’s rebuttal are both wonderful (Britta’s angry diatribe on society’s idea of a woman’s responsibilities feeling very topical right now) as is the way Shirley and Andre come in and end up finding their way back to one another via their responses (hats off to both the writers and the performers here). It’s a nice, gentle reintroduction (and hopefully just plain introduction to some) to the universe of Greendale and I’m sure they’ll get back to the craziness soon enough.

30 Rock really enjoys their holiday episodes don’t they? Valentine’s Day, “Leap Day” and now “St. Patrick’s Day,” which falls somewhere in between the previous two in terms of quality. It’s not an outright bad episode like the Valentine’s Day two-parter, but it feels very routine. Dennis Duffy returns and does Dennis Duffy things. Hazel and Pete struggle with wrangling the egos of Tracy and Jenna (or is it Jenna and Tracy) only to have Kenneth swoop in and save the day. The sole plot point that feels inspired has Jack getting involved in the writers’ game of Colonizers of Malar, but even then the way it’s used to suggest he can make something out of nothing in his position at Kabletown feels a little trite.

Feeling too familiar and uninspired is a rut shows too often fall into once they hit the 100 episode mark. It’s something 30 Rock has struggled with this season to varying degrees of success. The abundance of holiday episodes doesn’t help as, “Leap Day” aside, they’re generally a pretty lazy way to fill episodes. “St Patrick’s Day” is hardly the season’s nadir but it seems emblematic of those struggles. One of the ways out of such a predicament is to have characters change, and while there’s no sign of that happening in the cases of Tracy, Jenna or the writers, it’s to the show’s credit that they’ve at least attempted that with Kenneth, despite the uneven results.

They seem to be attempting something similar with Liz. The season opened with her blissful at the prospect of a relationship with Criss and tonight she finally utters the words “I love you.” The Hulk hands are a nice touch, and this is all backed by a winking joke from Tracy commenting on how rewarding it is to see a character you’ve invested so much time in show signs of emotional growth, but he might be right. At the very least it shows a new direction for 30 Rock to take in regards to Liz and, the odd successful episode aside, 30 Rock is a show in dire need of a new spin on things. 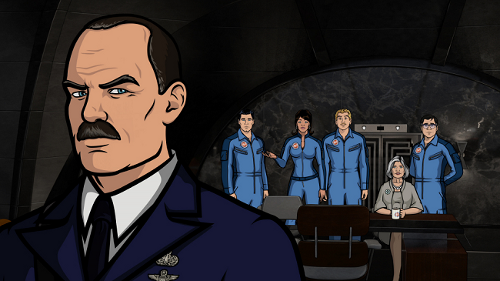 Reviewing the first half of a two-parter is always a difficult task. In the case of something like “Space Race, Part 1,” which is almost entirely set up, it’s always possible the framework they carefully assemble in the first part will come crashing down in the second. Fortunately, season 3 of Archer has given us no reason to assume that will be the case and even taken on its own “Space Race, Part 1” has plenty for fans to appreciate.

As if the “Archer in Space” conceit wasn’t enough of a draw, tonight’s episode also features the much-publicized appearance of Bryan Cranston. He will likely be given more to do next week but it’s a lot of fun watching him avoid Archer’s attempts at getting him to say “danger zone.” Even better is the way the show uses the revelation that he had been toying with Archer all along to punctuate just how irredeemable this character is. Also in the running joke department we have Pam and Cheryl stowing away, as they did in “The Limited” and in “Skytanic” before that. Their reason for coming is another callback to Pam and Archer’s affair in “Crossing Over” and there’s a ping pong paddle ominously floating in the detention cell during their post-coital conversation.

In another “let’s stop and appreciate just how insane this show can be” moment we have Archer riding Cyril through Lana’s vomit while holding his mouth open as the crew becomes acclimated to zero gravity. It’s absurd, but the ease and nonchalance with which the show pulls it off is a sign of just how on point Adam Reed & Co. have been. There’s no reason to think Part 2 won’t be even better.