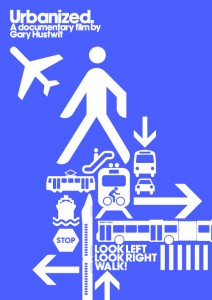 I expect that fans of director Gary Hustwit’s previous films Helvetica and Objectified are already making plans to see his latest work. They won’t be disappointed. The audience at Friday’s screening certainly wasn’t. Observing the sea of people armed with library books, copies of The New Yorker, and NPR on iPods, Hustwit remarked that the output of Toronto’s creative community had been brought to a halt. To everyone else, then: the object of this review is to convince you that Urbanized is a witty, informed, and essential examination of one of the world’s most vital issues.

This documentary is a heady (but not at all overwhelming) mix. Urban design experts—architects, developers, city planners, academics, urban activists, and more—discuss their part of the field over slick cinematography featuring the some of world’s most iconic cities. The result is part theory, part history, and part case study. It is hyper-informative, but not at wit’s expense. After Sheela Patel, a Mumbai housing advocate, presents a litany of sewage statistics and relates the municipal government’s belief that more toilets would attract more people, she quips, “As if people come to shit.” That bit brought the house down, and Urbanized has plenty of moments like that.

Aside from intellect and wit, the cast (which is prodigious, in number and thoughtfulness) is supremely passionate about making the case for good urban design. Venerable architect Oscar Niemeyer (age one hundred and four) makes his case for Brasília’s spacious planning, despite his colleague’s preference for centralisation. Bogota’s populist former mayor Enrique Peñalosa chuckles that the right to park is not in any national constitution and champions his system of modern buses and dedicated bike lanes. Sicelo Nkohla of VPUU (Violence Prevention through Urban Upgrading) explains how they reduced the crime rate in a South African township by relocating and improving the area’s main pedestrian walkway. And of course, patron saint of Toronto Jane Jacobs is celebrated, despite her absence. That said, the film’s fair play might be lost on some audiences. During the Q&A, a young man misidentified Urbanized as a manifesto. This is an unfortunate way of looking at the film. Obviously, a documentary about urbanism describes (and frequently identifies with) certain values, but Hustwit is clear that this is a film that presents options and ideas, not one that promotes one solution over another. He is also especially clear that urban design involves struggle between competing values and conclusions. The best example of this is his even-handed portrayal of the Stuttgart21 project; spokesmen for and against, and their supporters, all have a chance to make their case. Then again, I suppose some audiences can see what they want to see.

It is tough to overstate the importance of urban design in a rapidly urbanizing world. Every single person who lives in a town or city has grappled with the issue, at least indirectly, at one point or another. Even my parents in rural Alberta are fighting an incoming housing development. We owe it to ourselves to be educated about something so vital to our quality of life, and Urbanized is a good place to start.