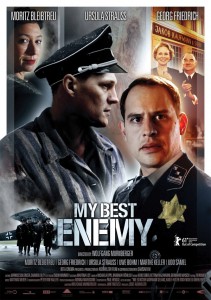 Some have wondered if a movie will ever be able to provide a catharsis for the Holocaust. While there are films (Schindler’s List, Sophie’s Choice, The Pianist) that cast a macabre and cautionary depiction of the Shoah, the only other alternative seems to be wildly offensive abominations masked as comedies or satire (Isla, She Wolf of the SS). While the debate continues to rage, Wolfgang Murnberger’s My Best Enemy can be used as an argument for both sides.

The film stars Moritz Bleibtreu (The Baader Meinhof Complex) as Victor Kaufman, a German Jew whose family owns an art gallery in Vienna. Among the collection is a rare and authentic Michelangelo painting.

When Hitler begins annexing Austria, his childhood friend Rudi (Georg Friedrich), who is Aryan, joins the Nazi Party, and when the SS begin searching for the Kaufman’s invaluable painting, Victor and Rudi must face obstacles of betrayal, torture, and persecution. The first half of My Best Enemy plays out as a derivative cinematic depiction of the Holocaust. The film starts off with obligatory scenes of trepidation, where the Jewish people living in Europe faintly foreshadow an impending cataclysm but choose to live their lives as normally as possible.

In this case, this consists of the relationship of Rudi and Victor, comrades who share a seemingly inedible bond. They off-handedly discuss politics and the proliferation of Hitler’s army, but although Victor and his family prepare for the worst, Rudi is not really bothered.

As the Germans start moving into Vienna, there are, again, compulsory images that have become staples in the genre. From people painting the Star of David on shop windows to Jews being sent to camps, My Best Enemy seems to hit on every single cliché that has pervaded other films. It’s all standard affair. However, about half way in, the film beings to change its tone and becomes a cheeky caricature of its first half, channeling Tarantino with sufficient humour and wit.

As the search for the Michelangelo painting intensifies, the film consequently doesn’t, taking itself less seriously. The sequence of events become more farcical and bizarre, but because the characters don’t react with the typical seriousness that we’ve come to expect from of them in the first portion of the film, we take them as intended jokes rather than unbelievable fabrications.

The sudden role reversal in the story provides an ingenious three-pronged effect by providing awkward humour, injecting automatic tension, and as a form of reparation and empathy. Although it’s an initially absurd concept, the film runs with the idea, and by the end, there are genuine moments of uncertainty amongst the silliness.

Even so, the second half in no way excuses the first, and although it tries, My Best Enemy is never audacious enough to wholeheartedly work. If the film had the gumption to embrace its absurdist tone from the start, like a certain Tarantino film, the film would’ve been better served, and, ironically, immensely more believable.

As it is, My Best Enemy is a moderately successful descendant of revisionist Holocaust filmmaking, feeling like Tarantino’s inglorious bastard.