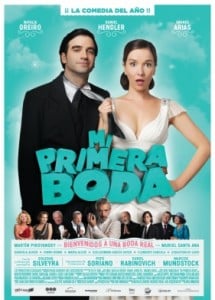 Grooms on their wedding day usually consider themselves the luckiest man in the world, but in Ariel Winograd’s My First Wedding, nothing can be further from the truth. Filled with humour, heart, cynicism, and misadventure, My First Wedding’s whirlwind narrative culminates into a perfect storm of marriage clichés.

The betrothed in question are Adrián (Daniel Hendler), a non-practicing Jew, and Leonora (Natalia Oreiro), a quasi-practicing Catholic. With the ceremony already balancing a precarious equilibrium (see previous sentence), Adrián inadvertently knocks it off kilter when he accidently loses the wedding rings, and as the wedding comes crashing down around him, Adrián must try to remedy the situation without furthering the ire of his wife-to-be.

My First Wedding initially feels formulaic, presenting itself as the marital equivalent of Death at a Funeral. The catalyst for the initial comedy comes from the interaction of family members with varying disputes (see the first sentence of the previous paragraph), but the contentions, and the characters themselves, are paint-by-the-number.

In fact, there’s even a scene where the obligatory academic snob (Imanol Arias) comments on the vapid and humdrum mix of people at the ceremony. There’s a hint of irony in what he says, and, for a moment, it almost feels like the film is self-aware. But alas, it never amounts to anything, and the film continues on the path of convention.

The supporting cast is mostly included to add variety rather than dimension, and most of them are too irrelevant to really care about. Even so, the film tries to make them engage with the story by having them all go on fervent spiels about their thoughts on marriage.

These comments are redundant because they come from people that are likewise, and it’s a heavy-handed approach to accentuating the films theme. Nevertheless, the side characters each have one or two jokes that work, preventing them from being a total waste.

But what the film does right is setting up the two lead characters, and giving them well fleshed out personalities. Although they are still generic, they are appropriately so, giving context and justification for their ensuing actions.

As the increasingly abnormal sequence of events begin to amass, they are both funny and believable because they follow the film’s pre-existing logic, and because the characters are already well established, their actions, and eventual transformations, feel genuine and inherent.

From the beginning, My First Wedding feels distinctly familiar, but like that crazy uncle you only see at family gatherings, it’s peculiar enough to make you laugh. The disastrous wedding is on par with that in Melancholia, but the film’s tone and conclusion make it a quaint and charming comedy that may cause more smiles than anything else.