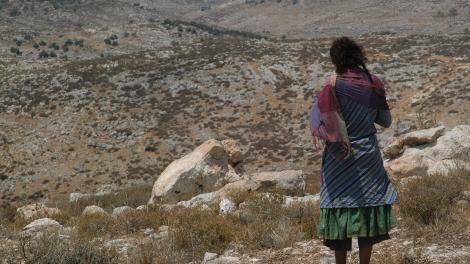 There are few hard and fast rules when it comes to film. Usually when a film feels longer than it is, it’s a bad thing. In the case of The Hilltops, it’s not. The film’s forty-five minute runtime belies the sheer weight of substance crammed into it. Of course, a documentary about Jewish settlers in the West Bank is bound to be fraught with visceral conflict that many find overbearing. What is so impressive about this film is how relentlessly director Igal Hecht pursues his subject. He stays on point, at issue, and the result is a film that punches far above its weight.

The film consists mostly scenes of hilltop settlements at different stages of existence – sparse open tents to more developed concrete cul-de-sacs – and interviews with Israeli professors, politicians, and the settlers themselves. ‘Interview’ is probably too strong a word here, as Hecht is content to let his subjects speak for themselves and we hear very little from the man himself. However, this is not to say that he is shy. He is willing to press and challenge his subjects, but he does so sparingly and only when necessary – say, when he needs a settler to clarify remarks or when someone is using a euphemism. We learn very little about what Hecht thinks of the hilltop settlements because he remains out of focus and instead presents us with the Jewish settlers, in their own words.

I appreciate that Hecht avoids editorializing, especially because so much media respecting Israel is nothing but editorializing – American cable news in particular. The reality is that there are radically different perspectives respecting settlements in the West Bank and Hecht is giving the settlers a chance to make their own case in their own words – but he leaves the conclusions to us.

In addition to playing at Toronto Jewish Film Festival, The Hilltops will also be playing at Hot Docs.