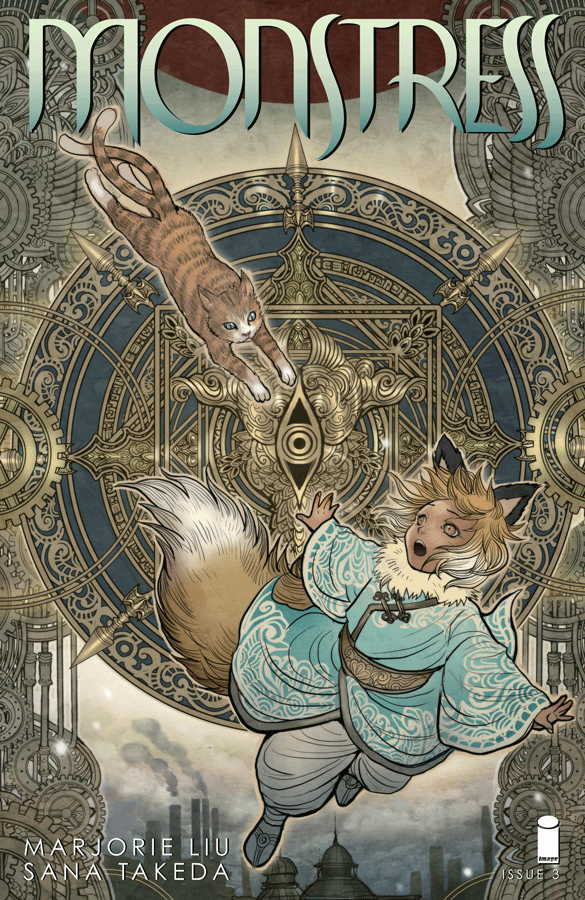 After expansive and expertly crafted worldbuilding writer Marjorie Liu and artist Sana Takeda did in the triple sized Monstress #1, subsequent issues haven’t lived up to its magical alternate history in the guise of steampunk, urban fantasy, and manga-influenced artwork But this doesn’t mean Monstress is a bad comic. In this issue, Liu and Takeda open up the story with a bang as our protagonist Maika unleashes a kind of tentacle monster to an Inquistrix, who is sent by the Cumaea, an order of priestesses who hunt Arcanic. (This what monsters in Monstress are called, like Maika and her friend, the adorable fox girl Kippa.) Maika also has part of a mask that is dear to them.

In Monstress #3, Liu gives a much needed perspective of Maika’s antagonists, the Cumaeans Destria and Yvette, but much of their dialogue is exposition occasionally vague, occasionally clear. These scenes stumble forward even though Takeda gives them lavish dresses and headpieces to show their power and privilege compared to the desperate Kippa and Maika, who wear rags. Monstress #3 has some emotionally powerful sequences, like when the Federation soldiers threaten Emilia, the kind woman, who is helping Maika, Kippa, and the talking cat Master Ren escape from Trucelands territory to the regions where arcanics live by holding her baby near a bayonet. Liu and Takeda don’t shy away from showing the unsettling nature of war and hatred. If you’re looking for a hero, read another comic because Maika is feared by both her enemies and friend, Kippa. Unfortunately, these stick-in-your-head type images are bookended by some poor plot transitions, like going from Maika captured to Maika hallucinating about her mom in a golden Egyptian temple like structure. Takeda truly makes the scenery around her look like actual gold and makes Maika’s mother’s word seem emotionally intimate with a neutral look turning to tears in a space of a panel. But this scene doesn’t really fit into the escape plot until the one eyed kaiju-esque gods show up. Perhaps, this is one of their temples?

See also  Astro City # 6 Gets the Series Back on Track

The connection between Maika and these mysterious one eyed gods with tentacles is still pretty cryptic three issues in, but they work in an atmospheric sense at the beginning and end of the issues as a barely verbal symbol for fear, death, and the monster within. The gods work better on a visual than a plot or thematic level even though the opening fight between Maika and the Inquistrix shows that she can call upon their power occasionally, and this takes a toll on her. This fight drains the page with Takeda slicing and dicing the page and flooding panels with black and grey colors as the Inquistrix is easily dispatched. Takeda overwhelms Maika’s body with tentacles, and when her face does appear, she is sweating intensely in a classic manga storytelling technique that shows the stress and lack of control Maika has in this situation. When the creepy gods return towards the end of the issue, Takeda keeps them to the background. This increases their menace as Kippa talks about how the arcanics she used to live with sacrificed to them, but didn’t pray to them. To borrow a religious cliche for a second, she has more of a fearful, ceremonial relationship with these Old Testament-type gods than a personal one like some Christians do with God in the New Testament. They represent an untapped, chaotic power that will keep the pages of Monstress pretty tense going award.

Artist Sana Takeda continues to cement herself as one of the best artists in comics in Monstress #3 with her ability to convey emotion through manga storytelling tricks, add fear, menace, or mystery to a scene with her color palette, and use layouts to show the chaos of Maika using her monster-type abilities.  Writer Marjorie Liu continues to develop Maika as a threat to her enemies, friends, and herself while creating a sad, breaking point in Kippa’s arc as she is no longer the innocent fox child no more. Unfortunately, these character beats are sometimes buried in a villain’s expository dialogue or a quick bout of cryptic foreshadowing. Also, Master Ren just flat out disappears without Kippa or Maika mentioning it even though he played a major role in Monstress #2.

All things considered, Monstress #3 isn’t half bad and definitely has potential because of its conflicted protagonist, dark visuals, and ever expanding world.