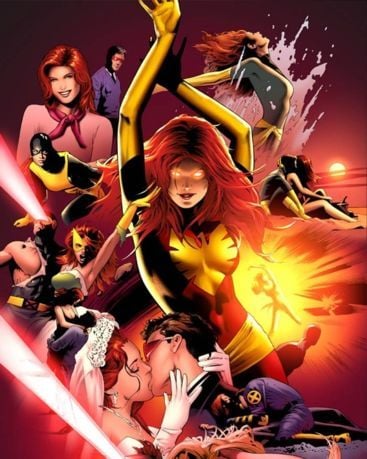 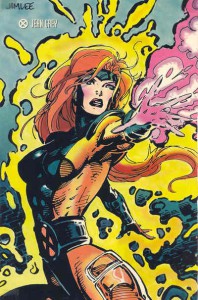 Powers and Abilities
Jean is a mutant born with tremendous telepathic and telekinetic abilities, enabling her to read and control minds, project her thoughts, enter the Astral Plane, mentally lift and move objects, and fly by levitating herself, amongst others.

When augmented by the cosmic Phoenix force, her abilities increase exponentially, enabling her to telekinetically affect matter on a molecular level (changing her clothes with a thought, for example), travel through space, and transform matter into energy.

Movies and Multimedia Appearances
Jean appeared briefly in such early Marvel animated series as The Marvel Super Heroes and Spider-Man and his Amazing Friends, before becoming a fixture of the various X-Men cartoons in the nineties, including X-Men, X-Men: Evolution and Wolverine and the X-Men. 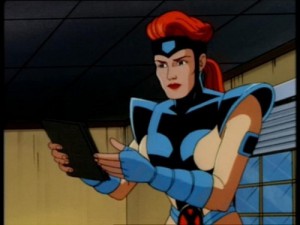 She has appeared in numerous video games, including Lego Marvel Super Heroes, and was played by Famke Janssen in the live action X-Men films. 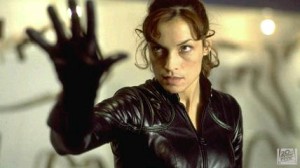 One Sentence Origin
Her mutant abilities triggered by the death of her childhood friend, Jean Grey became a pupil of Charles Xavier before eventually joining his first class of X-Men to fight for a world where humans and mutants can live together in peace.

Memorable Moment
X-Men #137: In the conclusion to the seminal “Dark Phoenix Saga”, Jean kills herself rather than be further corrupted by the power of Phoenix and endanger the universe and the lives of her loved ones. 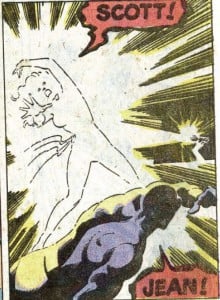 Fun Fact
Later stories, in an effort to revive Jean Grey and clear her of any culpability in the crimes of Dark Phoenix, revealed that the Jean who died at the end of the “Dark Phoenix Saga” was a physical manifestation of the Phoenix force, which copied Jean’s mind and body to experience humanity. 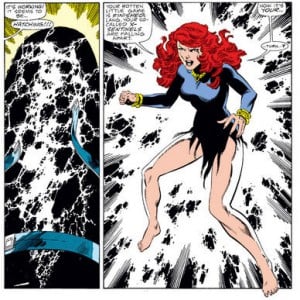 Austin’s Analysis
Jean Grey is one of the First Ladies of Marvel Comics, who, alongside Invisible Girl and Wasp, was one of the first female characters present at the beginning of Marvel’s Silver Age renaissance in the 1960s. Like her peers, Jean was no mere girlfriend archetype or damsel in distress, but was instead a vital, equal member of the X-Men alongside her male teammates (albeit, for many years, one of the team’s weaker members). While X-Men never achieved the sales success in those early years as Fantastic Four or The Avengers, Jean remained a constant and significant member of the X-Men even after their title was cancelled due to low sales. When the group was relaunched in the seventies with a new, more international cast, Jean, along with her longtime love interest Cyclops, became one of the original X-Men to stick around alongside new characters like Storm and Wolverine. 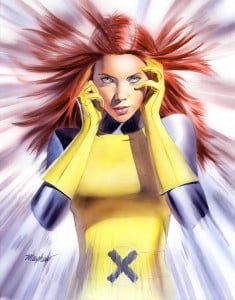 In fact, as part of the “All New, All Different” X-Men, Jean’s profile rose higher than ever, as she quickly became the character at the center of new writer Chris Claremont’s grand narrative for the series. Along with artists Dave Cockrum and John Byrne, Claremont significantly increased Jean’s powers, taking her from the weakest member of the team to its most powerful, putting her through an operatic story arc that saw her save the universe, be manipulated by villains, corrupted by her power and, ultimately, sacrifice herself for the good of the universe in the climax to a storyline that is widely regarded as one of comics’ best.

If her story had ended there, Jean would likely be remembered as one of Marvel’s most iconic characters, a founding member of the Silver Age who gave her life in service to one of the genre’s seminal stories. Yet the Powers That Be saw fit, for better and worse, to bring Jean back to life. As such, the character has instead become defined by that resurrection. In a genre in which the death of characters has nearly lost all meaning, Jean has become the poster child for the laughable fluidity of comic book death. This is an unfair association, as, excluding the kind of in-story death fakeouts common to comics, Jean’s “deaths” are no greater than a vast number of other characters: including “Dark Phoenix” (which technically wasn’t Jean), Jean has died twice and returned once. Nearly every member of the X-Men, as well as characters like Captain America, Batman, and Superman, have enjoyed extended periods of time where readers were meant to believe the character was dead only for them to return in that inimitable comic book way. Yet Jean remains the punchline for the joke that is death in superhero comics. 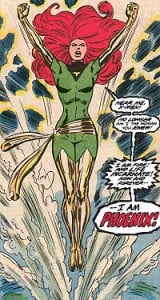 Perhaps this is because aside from those deaths and resurrection, there’s unfortunately little else to define Jean’s character. While of the same vintage as Invisible Girl and Wasp, all of the significant developments her character experienced were eventually retroactively attributed to a cosmic copy. Invisible Girl became the heart of the Fantastic Four, holding the team together. Wasp became a confidant leader of heroes. Jean grew exceptionally powerful, then died, tragically yet heroically. When the “real” Jean returned, she was largely defined in relation to that cosmic entity, and struggled to establish herself, even forced to once again use her Silver Age name “Marvel Girl” (Invisible Girl had since grown up to Invisible Woman) before abandoning a catchy codename entirely in the 90s. Aside from the Phoenix stuff, Jean’s other defining characteristic was her longtime relationship to Cyclops, and while I certainly don’t agree, many readers found the trials and tribulations of their relationship dull, especially compared to the smoldering attraction between Jean and fan-favorite Wolverine (an attraction that came to dominate the X-Men feature films).

As a result, it’s become difficult for Jean as a character to get out from under the shadow of that initial death, and even when she appeared on the verge of doing so (during Grant Morrison’s New X-Men run), she died again, in an intentional echo of that earlier story. Since then, Jean has, a few visitations from beyond the grave not withstanding, remained dead, and though Brian Michael Bendis has an opportunity to do some interesting things with the time-tossed teenaged version of the character in All New X-Men, it will likely require a storyline on the magnitude of “The Dark Phoenix Saga” to establish Jean, in the minds of the general comic book reading audience, as something more than a character who’s chiefly known for dying and coming back to life. That seems unlikely to happen anytime soon, and as a result, unfair though it may be, Jean will remain defined by comic book death and resurrection. 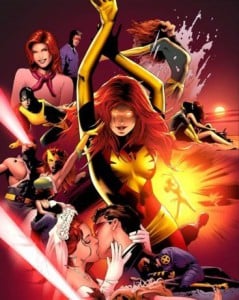