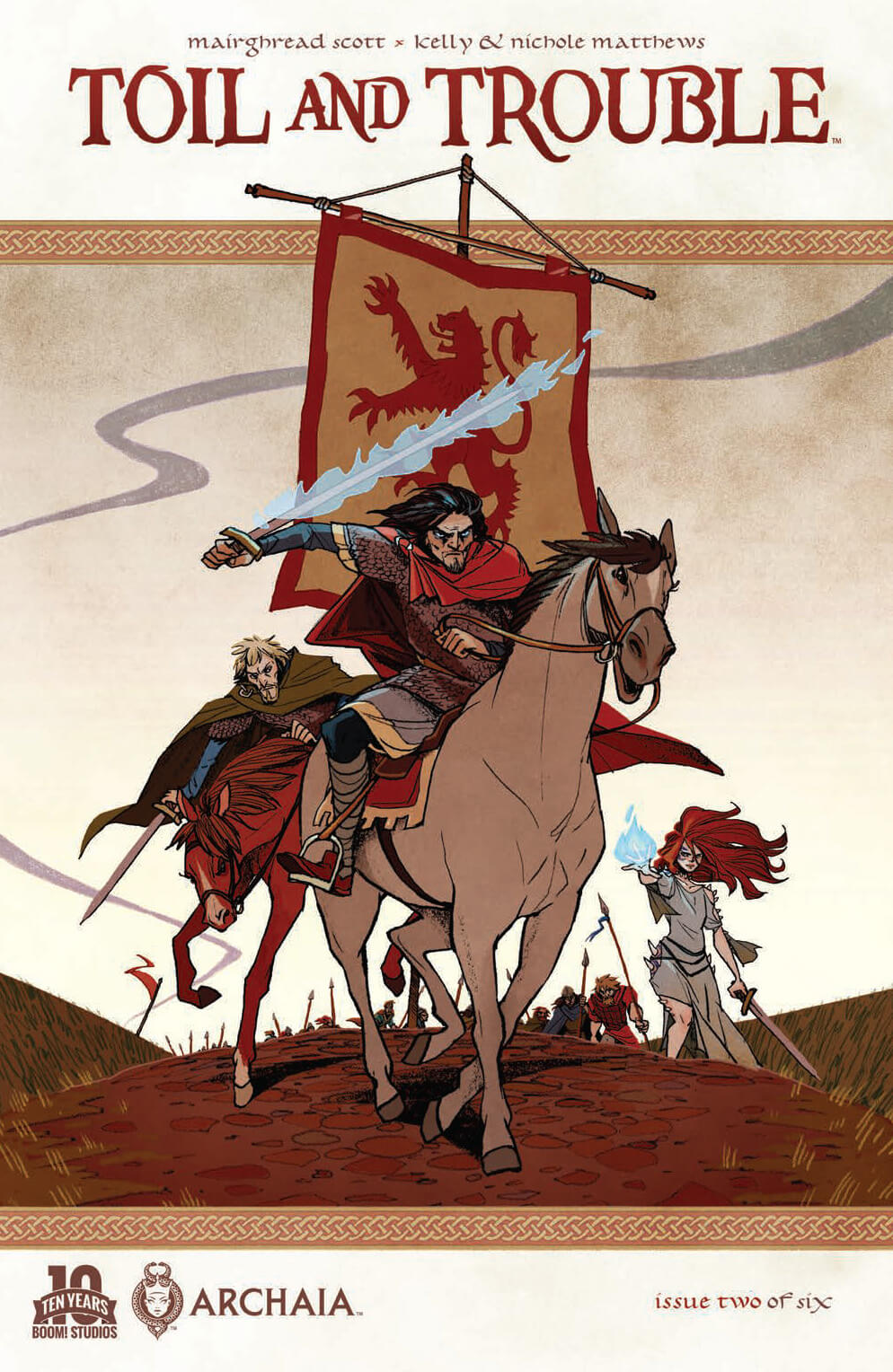 Toil and Trouble # 2 is part of a miniseries about the three witches from the play Macbeth by William Shakespeare. The comic artwork of Kelly and Nichole Matthews provides stunning visual images and a unique style.  Writer Scott gives clear motivation to the Weird Sisters and their part in the tale of Macbeth as readers learn about why they started their prediction. It should be noted that the narrative boxes of the writing may seem a bit long, but do allow for the reader to get past exposition to the meat of the comic. Toil and Trouble # 2 inspires the reader to reflect on how much powers the Sisters Weird really have on fate.

The story begins with the Weird Sister in conflict with each other. The sisters Smertae and Riata are at odds with each other. Riata champions Macbeth into battle and saves him from death while Smertae opposes her actions wanting Raita to strengthen Malcolm.  The middle sister, Cait, tries to act as a peacekeeper between the two siblings. It is revealed Raita has once been exiled before as she did not submit to Smertae’s decision of Scotland’s king. Things between Smertae and Riata come to a boil as the two sisters bear armes against each other in a showdown.  As the dust settles, Smertae claims righteousness in her choice as she seeks to fulfill fate. Raita declares she fights for the protection of their people. The conflict between Raita and Smertae increases as the two debate who is the next king to be.

Writer Scott shines strongest with the characterization of the Weird Sisters. However, her narration may drag slightly at the start of the comic.  Smertae is power hungry and supposedly worried about the old ways. She desires to fulfill the will of fate, but she cares little at what price it is done.  Raita shows care over the good of the people of Scotland and struggles to deal with Smertae. She calls out her sister’s ego such as when Smertae cursed a sailor’s wife for not honoring the old ways. Raita reveals the thumb of the drowned sailor, which Smertae keeps as a trophy of her “good works.”   The last sister, Cait, offers a middle ground between Smertae and Raita. Cait calls for reason and understanding between the other sisters, while she tries to create peace between them. The narration may be seen as chucky and be slow for the buildup of the plot.  Still Scoot offers an insightful look into Raita’s mindset as she opens the comic.

Toil and Trouble #2 starts with a slow build up in the writing department and quickly raises in the middle to conflict. The artwork does offer much for the reader to look at and enjoy for its character designs and backgrounds.  For casual readers, the comic is accessible without requiring heavy knowledge about Macbeth.  For the Shakespeare lovers, the comic will happily add an extra bit of flavoring onto the classic Scottish play.