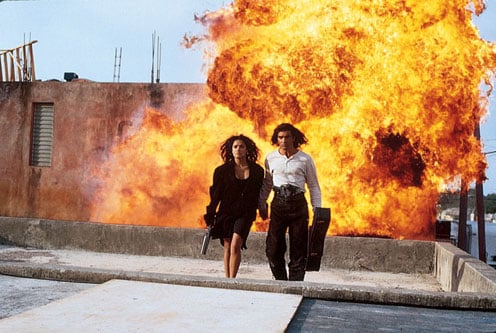 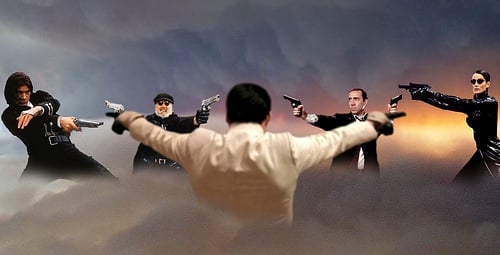 Summer blockbuster season is a perfect time for the movie fans to show their true colors. For some, the appeal strikes with a comic book inspired action movie, as in Iron Man 2. For others, it might be a laugh-out-loud high concept comedy, as in Get Him to the Greek. But for cult geeks like myself, nothing beats the summer heat like the grindhouse grit of a Quentin Tarantino or Robert Rodriguez film.

Barely making the cutoff, Rodriguez is capping off this summer’s blockbuster season with Machete due September 3rd. Adapted from his very own fake trailer headlining 2007’s Grindhouse, it stars Danny Trejo. Trejo takes on his original role as a renegade former Mexican Federal, starring along with Steven Seagal, Robert De Niro, Lindsay Lohan, Jessica Alba, and a whole array of unlikely actors you wouldn’t expect to be in a film together.

Sure you won’t find middle age women going gaga over the newest Stiletto heels, or toys planning their route of escape from an evil teddy bear, or even Mr. T; but rest assure you’ll find your fill of blood spewing violence, chock-full of knife fights, machine gun brawls, and at last, Mexican Standoffs. Ah, what would a summer be without the dramatic buildup of an awesome Mexican Standoff?

In honor of this film’s advent, here is my list of the Top Ten Best Mexican Standoffs in cinema.   So sit back, put your bluffing face on, and everybody please point your gun to the person on your right. The Top Ten Mexican Standoffs are about to begin:

10. Butch Cassidy and the Sundance Kid 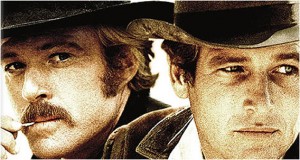 For me, the ending is probably one of the most unconventional and emotional standoffs on the list. Now some might contest whether or not this actually constitutes as a Mexican Standoff. The fact that Butch and Sundance have to face a whole Bolivian army make the odds a little slanted, but there are those elements of uncertainty and hope that make it possible. There is hope that maybe their aim will be sharp enough and their legs fast enough, so that they can dodge the enemy’s bullets and escape to a safer place. We nor the guys can be certain, nor will we really know for sure.

Two words explains why this short yet memorable standoff is so great: Kurtwood Smith. Smith has the mouth to talk fast with, fingers to dip wine in, and enough muscle to make you shit snow for a year. But will Mikey kill him? I don’t think so.

8. Shaun of the Dead

You know what? I lied. This is the most unconventional Mexican Standoff on the list, not to mention the funniest one. Armed with broken bottles and corkscrews, the film parody’s one of the best Mexican standoff scenes ever from Reservoir Dogs. The only thing better than seeing zombies battling it out with Shaun and Nick is watching it back to back with a Tarantino cult classic.

Probably one of the most unsettling standoffs you’ll come across. Hoffman finds himself in a bizarre triangle between a man who wants to rape his wife and his wife’s ex lover. The struggle between Hoffman and the intrudes is compelling, forcing you to be at the edge of your seat until it’s very end. Filled with shotgun blasts to the chest and a tumbling fight down a flight of stairs makes this standoff definitely not for the faint of heart. 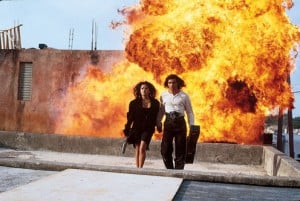 Where would a Top 10 Mexican Standoff list be without Robert Rodriguez? There is nothing cooler than a vigilante Mexican, looking to settle the score with a guitar case full of guns.  You know it is a good Mexican Standoff when you can consider that the whole damn movie isjust one huge standoff.  Definitely full of high energy, this film is the definition of a Mexican Standoff, and could be a good pregame before seeing Machete.

Want to know how to make an awesome Mexican Standoff pie? You take a dash of Tony Scott’s smokey visual effects, a heaping bag of pillow feathers, and a generous sprinkle of witty Quentin Tarantino dialogue. Oh, and don’t forget the big dollop of Chris Penn on top. Now that’s what I call cooking with love. If a couple can survive a day like that, they can survive  anything. 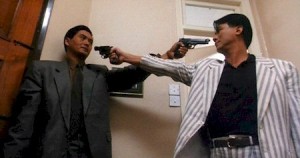 John Woo definitely puts the “WOO” in Mexican Standoffs. This film has tons of 80’s cliche’ goodness, chalk full of white-suit-on-white-shirt attire, fluttered doves, and long paused smiles. It’s just a cluster fuck of action that questions whether or not the style of shooting should actually be renamed “Chinese Standoff”. From exploding oil drums to back-to-back shooting, it’s a film that tests the ages of time and should be on top of any action fans top ten list. 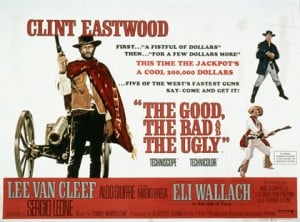 This is the granddaddy of all standoffs. The iconic no-win-no-lose situation that is seared into American cinematic history. Even the title alludes to the fate of a three party shoot off. The setup of the scene is perfect. Between Client Eastwood’s pan cold facial expressions, to Sergio Leone’s masterful cuts from the shooter’s eyes back to their guns and to Ennio Morricone’s brilliant climatic buildup of a score. Suspense is thick in air as the movie watcher clutches their fingers between their teeth, waiting in anticipation for the first blow. The scene over nine minutes long of pure tease, and you’ll find yourself screaming “SHOOT ALREADY GODDAMMIT!”  It’s simply the perfect finale to an awesome Western.

It’s hard not to believe that a Mexican Standoff would not happen when you place a group of unwilling students on an island to fight to their death, but it will stop you in your tracks when you see it happen. The concept of the movie itself seems like one big standoff, as you wait to see if each student has the guts to kill their peers.  In particular, the lighthouse scene is one that will just blow your mind, forcing you to rewind back and watch it again and again. What’s not to love about a Mexican standoff involving Japanese school girls, a game of “Who Poisoned the Soup?,” and the gattling of machine guys in a confined area? 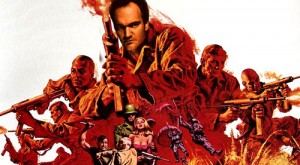 At this point in Quentin Tarintino’s career, the Mexican standoff has become sort of a cliche’ in his films, but you have to admit that the man knows how to build an intense scene. Ask anyone to name a memorable point in the movie, and chances are they will mention the bar scene. It’s the type of scene that you have to watch over and over again, because the buildups execution is epic. The last thirty seconds will just put you in a daze and give you a better buzz than any thirty three year old glass of scotch. Soak it in and enjoy the ride. Just pull up your most comfortable chair, lay back, and “Say Auf Wiedersehen to your Nazi balls!”