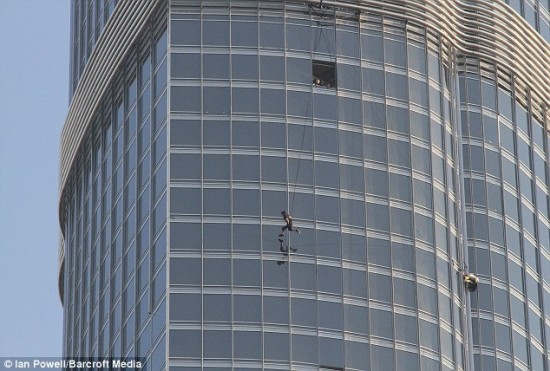 These incredible pictures on the set of Mission Impossible 4 appeared online courtesy of Daily Mail. This weekend Tom Cruises who always insists on doing his own stunts, proved once again he is still very much the adrenaline junkie. The 40 year old actor dangled almost 2,717 ft in the air from the world’s tallest building, the Burj Kahlifa in Dubai.

Daily Mail reports, “On Saturday, the actor was snapped hanging precariously from the observation deck of the building, which is 124 floors high, as fans watched in awe and terror from the street below.

Dressed all in black, the 48-year-old ran across the windows of the tower as technicians and film crew watched nervously from an open window above him.”

Tom Cruised announced he would be performing the stunt himself a few days prior to prove to any skeptics that it would really be him. Cruise was reported saying, ‘I’ll be spending many days, many hours on the side of this building. I can’t give details, but I will be up there.’