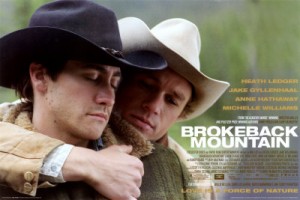 A strong character has the privileged opportunity to reveal who we are, and sometimes whom we want to be, delivering a message linked to the consequences attached between the two.  Ang Lee’s tender love story between two homosexual ranchers in the American Midwest effectively demonstrated this harrowing reality. It was a masterpiece in everything cinema aims for: sympathetic & authentic performances, crystal clear cinematography and a unified soundtrack, where each frame is precise, provoking and essential to the story. It is such a disappointment is lost Best Picture to Paul Haggis’ slick, exaggerated, and stereotypical, ensemble piece Crash. Why? Could the academy be that uncomfortable with homosexual subject matter? Crash is unremarkable in its story telling which weaves the lives of several A-listed actors in a tale that ultimately offers no insight except that sometimes we are simultaneously guilty and the victims of racism. Full of crosscutting and rapid diction, characters might seem plausible, but I am unsympathetic to their clichéd plights. All I really need to say is that Haggis’ story has been told before, and told better. And I can’t say the same of Mr. Lee’s Brokeback Mountain. I love Forrest Gump. I do. I think it is a heartwarming, heroic, and inspirational film that’s worthy of the Boomer generation’s adoration. But frame for frame, in terms of drama, pure Aristotelian drama, Shawshank Redemption is faultless. This overlooked, but critically praised prison film is entrenched with Academy goodness –loyalty, hope, and humor in the face of utter despair.  Morgan Freeman’s “Red” narrates the story of Tim Robbins’ Andy Dufresne prison sentence, and the friendship that it brought the two men. It is allegorical storytelling at its best and an effective rendering of the importance of personal worth and the gritty reality for lifers. It should have won in 1994, and if it was to lose, I will go on the record to say it should have lost to Pulp Fiction, which offered a tantalizing rendering of storytelling in modern age moviemaking. This still stings cinephiles twenty years later! I admit a small (read: large) bias against Kevin Costner, as he has barely been someone I considered more than a two-note actor, let alone “serious filmmaker.”  Yet, his directorial debut beats one of the best mob films ever made and one of America’s greatest directors. Yes, Dances with Wolves is exceptionally shot (and deserving of its Best Cinematography Oscar) and less formulaic than the first Oscar awarded western, Cimarron. But this three-hour epic tale of a white man inhabiting a Native American tribe and (surprise) learns his prejudices toward these “savages” completely unmerited. I’m sorry, had this been more than a visually stunning, historical inaccurate fantasy film, I would say kudos to Costner. But it’s not. And to have it win against Scorsese’s masterpiece is just unjust. Goodfellas is a film that lingers in your mind days, weeks, maybe even years after viewing it. There is nothing airy or imaginary in this claustrophobic rendering of how organized crime cripples its most loyal family members. Every actor in this film is on fire! At least Mr. Pesci has the Best Supporting Actor Oscar to illustrate his mastery of the material. It’s a shame, a film with such dynamic, guilt-inducing sequences and brave storytelling placed second in the Academy’s eyes. Apocalypse Now is one of chief films of the 20th Century. Period. It also lays claim to one of the most referenced performances in cinematic history, that of Marlon Brando’s Colonel Kurtz, who wasn’t even nominated that year! (But that’s another entry altogether) Coppola’s monster of a film, depicting the haunting Vietnam War is an example of cinema at its finest – knockout performances, back-to-back evocative sequences, a finely tuned soundtrack (pure rock ‘n’ roll!) and an ending that lingers in audiences’ long after the theatre lights up. It’s the magnum opus of contemporary filmmaking. That is precisely what makes its loss such a bitter pill to swallow. Kramer Vs. Kramer is a solid telling of an unhappy married couple, their divorce and the impact it not only has on their son, but themselves. Yes, the film boasts nuanced and superb dialogue – where characters speak to reveal, and which translates into insightful character motives. And it is a well-constructed drama; Hoffman’s interaction with his son exudes compassion, no doubt. And perhaps, in any other year, I would say a film that chose not to take sides dealing with such a topical issue could very well deserve an Academy nod. But in 1979 it pales in comparison to Apocalypse Now, and even seems petty in its content – a fight between two privileged people versus a whole god-forsaken war bearing down on a single soul. Oh, the horror! I will start with a disclaimer. I have not seen How Green Was My Valley, actually I have not even heard of it until I started researching for this entry. I tried to find a copy of the film, but had no avail at any local rental house. But here is what I did find…Citizen Kane is rated number one in over thirteen “Greatest Films Ever Made” lists, (including AFI’s 100 Years…100 Movies) and let’s top it off with a quote from legendary film critic, Robert Ebert exclaiming, “So it’s settled: Citizen Kane is the official greatest film of all time.” Which makes me wonder, how can the greatest film ever made lose to a film I can’t even rent? The defense rests.