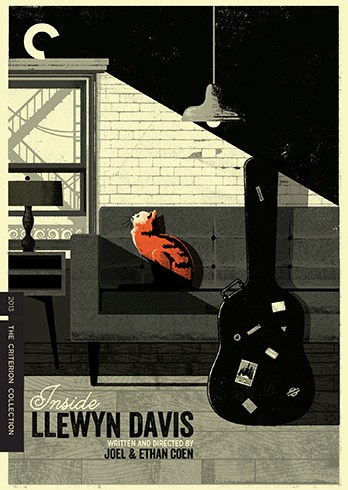 Inside Llewyn Davis
Written and directed by Ethan Coen and Joel Coen
USA, 2013

There are a number of ways in which Inside Llewyn Davis works better than it perhaps should. This bleakly discouraging film about a largely irredeemable character who essentially gives up on his life’s ambition was certainly not the feel good movie of 2013. Yet with its loosely unspooling narrative and its utter dedication to the sights and sounds of a singularly distinct setting, brothers Joel and Ethan Coen, supported by an extraordinarily complex performance from Oscar Isaac in the title role, craft a moving, thoughtful, and, in a peculiar way, stimulating film.

The Coens have a tremendous talent for creating idiosyncratic characters—some admittedly treated with a mocking condescension, some given their due empathy—and there are plenty of those to go around here; characters of purely humorous quirk like Stark Sands’ Troy Nelson with his blankly passive milk-slurping demeanor, or John Goodman’s acerbic drug-addled Roland Turner and his misanthropic associate Johnny Five (Garrett Hedlund). As for Llewyn himself, he is a notably contrary individual, especially to be the superficial hero of the film. So in that, he too is rather unique. It is a testament to the brothers’ efficient screenwriting that so much about Llewyn is gleaned in a surprisingly short period of time: his confused state, his selfishness, his largely self-inflicted adversities. As a performer making his way up the folk music ladder of 1961 Greenwich Village, Llewyn is continually short on money and long on free time, a despairing combination. His deepest difficulty appears to derive from his inability to transition from a duo (his former partner committed suicide) to a solo act. Though seemingly agitated by most everyone he encounters, he is perpetually reliant on others, and his path toward independence—professionally and personally—leaves him always on the outside looking in.

Llewyn has no interest in his past (until he needs it); he is more concerned with moving forward, usually just as he should be slowing down to take stock of his life. The box of records he lugs around is literally like hauling the memories of prior associates and prior accomplishments, and he is eager to simply stow it away. Hints toward potential soul-searching appear throughout the film, from Roland and his voodoo threats of eventual reflection, to “What are you doing?” etched on a bathroom stall, to the rather obvious placement of a poster for The Incredible Journey, which stops the briefly contemplative Llewyn in his tracks (and which, incidentally, didn’t actually come out until 1963). But even with these introspective signals, Llewyn moves on with a disregard for personal evaluation. At the same time, he rebukes the notion of planning ahead, chiding his former girlfriend and mother to his unborn child, Jean (Carey Mulligan), for being careerist and “square.” This middle of the road placement results in a circular stagnation, with a continual rehashing of similar actions in similar scenarios, all on repeat. It’s unclear exactly how long Llewyn has been in the folk singing game, but the general sense is that he expects great things to happen without putting forth too much effort. Loosely based on an amalgamation of real-life folk singers including Dave Van Ronk among others, Llewyn appears more interested in the idea of being a folk singer—or, more precisely, living the life of a romanticized version of one—than he is with dedicating the requisite time and energy. 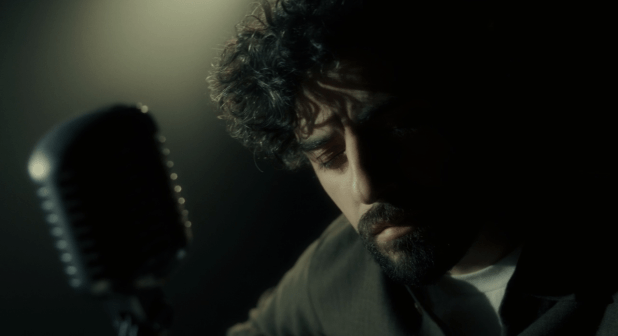 The nearly four-minute long opening number Llewyn performs is shot almost entirely in close up, as he sings with eyes closed, channeling the power of the music while blocking out that which exists externally. Strangely though, for a film so concerned with the music, the ostensible plot itself has to do with so much more besides. There is undeniably an exceptional amount of time devoted to the folk ballads, to the point that rather than being merely a distinctive soundtrack (as in O Brother, Where Art Thou? for example) the music here is itself a reflexive character, a sort of Greek chorus commenting on the lives of those in the film. These are songs of sadness, death, roaming aimlessness, and failure, aspects genuinely applicable to Llewyn’s true state. 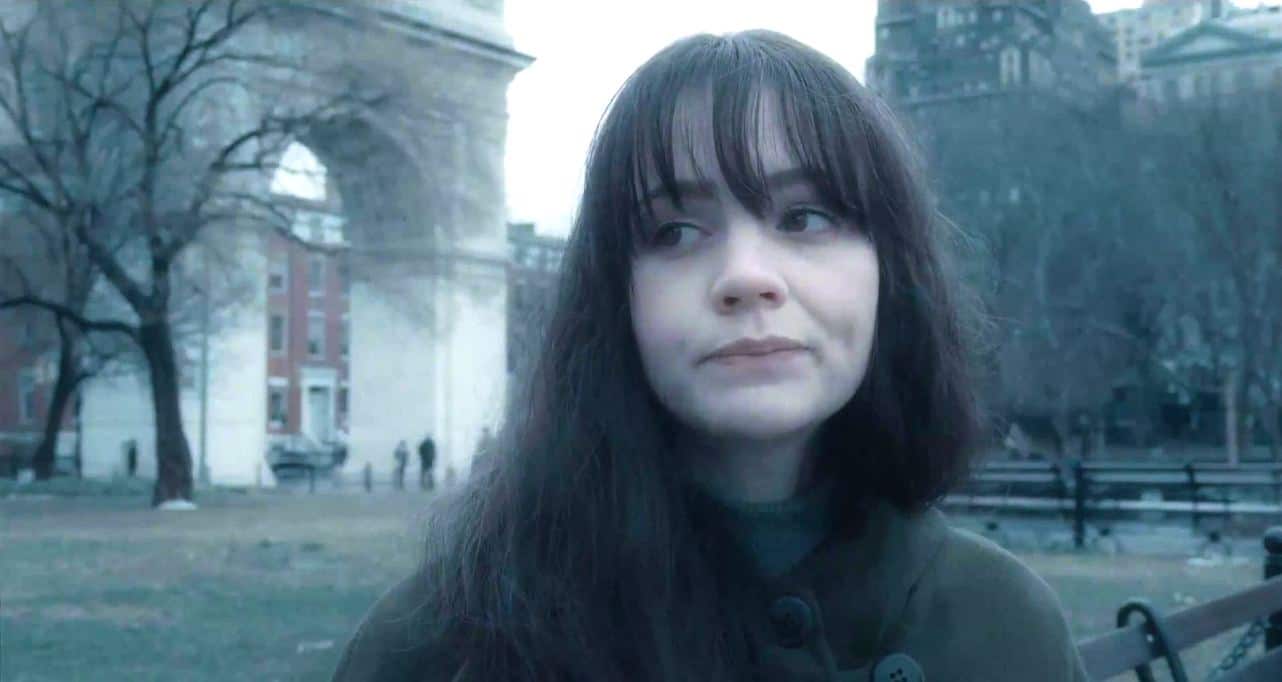 Music producer Bud Grossman (F. Murray Abraham) muses that Troy Nelson’s recording potential lies in his ability to connect with people, a trait that surely doesn’t apply to Llewyn. As good as he is, perhaps that lacking of identification is what holds him back the most; no doubt about it, he is one self-centered bastard. Worse than no success, for Llewyn anyway, is the success of others—when he is down, he wants everyone else down with him. Despite this egocentricity, though, he has a precariously enduring relationship with a small circle of family and friends, all of whom form an amazingly forgiving support system. As played superbly by Mulligan, Jean, while cute as a button, is justifiably harsh in her fierce impatience with Llewyn’s irresponsibility, but she is also the one who arranges what may be his last gig. Llewyn’s sister, meanwhile, does her best to ground her brother, all while he derisively questions her suggestion that, for some, life is just existing and that most people simply do live lives of everyday normality. Perhaps it is just that everyone Llewyn is close to, whom he inevitably manages to offend, all view him as he does the two cats that foil his plans: as a helpless, if endearing, burden. According to Issac, his character is “charismatic, gregarious, outgoing, positive” … just not during the week in which the film takes place.

Inside Llewyn Davis is a combination of at least three things Joel and Ethan Coen do exceedingly well. Their fantastic ear for dialogue is on full display, and like Llewyn, as a comparatively more convincing character than certain Coen types, the nimble verbal quips spoken by those here manage to ring true, even if I for one have never been around so many witty people with such great timing. Related to this is the humor seldom absent from even the most austere Coen feature. Aside from the clever dialogue, the comedy of Inside Llewyn Davis stems from amusing shifts in tone, often hinging on a second’s worth of prolonged editorial sustainment. See, for instance, the anger Llewyn shows when friend Lillian Gorfein (Robin Bartlett) sings the part of his former partner, Mike. Llewyn rages in anger at the painful reminiscence, only to soon thereafter be confronted by Lillian when she discovers the cat Llewyn returned is not hers. The passage contains one of the more devastating emotional outbursts of the film, yet just as it reaches an honestly powerful climax, the seriousness rapidly dissipates as Lillian begins shrieking about the female cat’s lack of a scrotum—hold for a beat, then cut. Maybe it’s just the 12-year-old in me who finds this funny, but her reaction and the brief pause before transitioning to the next scene leaves the whole sequence just short of full profundity but capitalizes on a fantastic sense of comedic pacing. 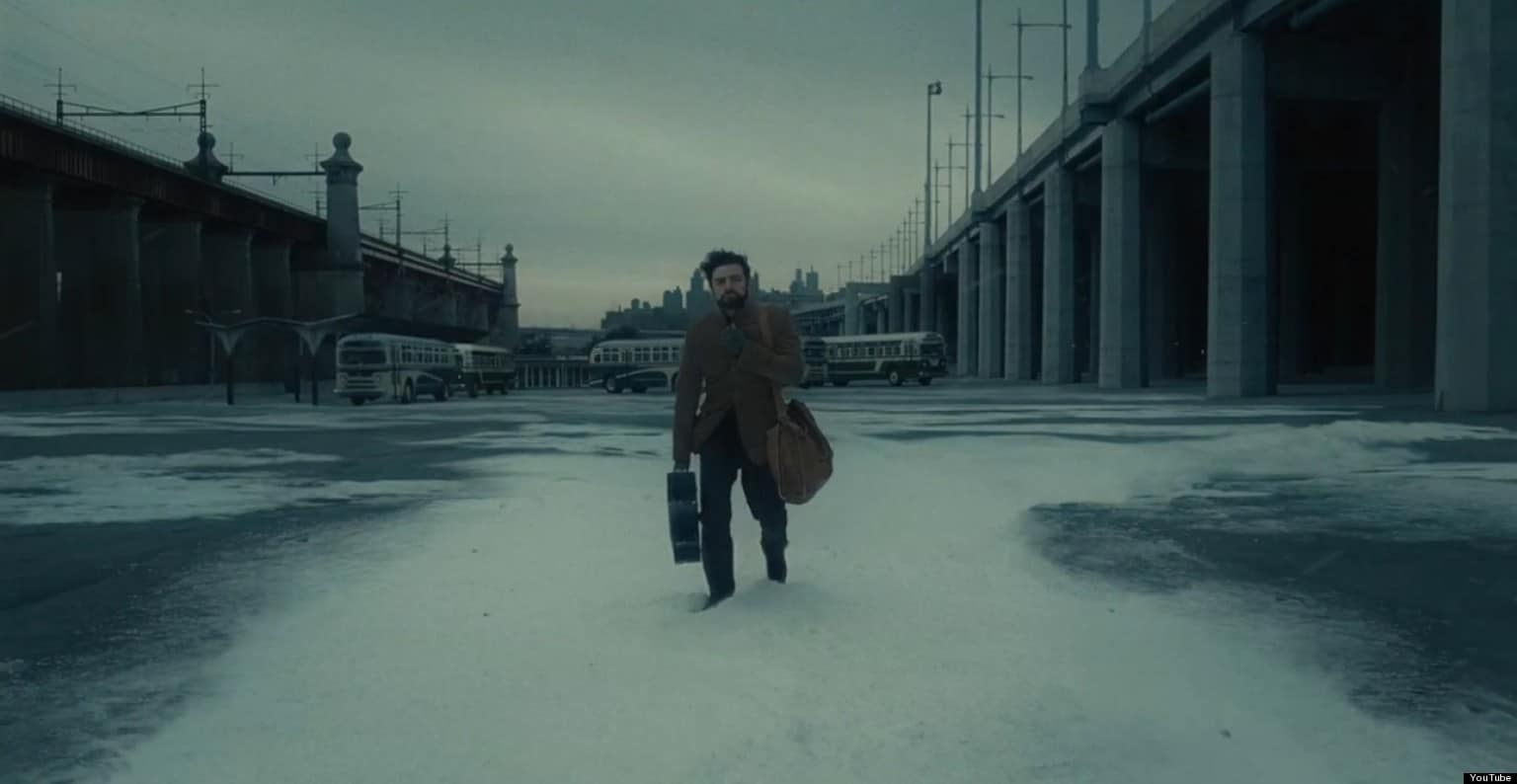 The third key aspect of the film is its aesthetic ambiance. The Coens and four-time Oscar nominated cinematographer Bruno Delbonnel create a beautifully subdued palette appropriate to the period, milieu, and tone of the film. The exteriors are colored by a bitter wintry cityscape, and though the interiors essentially carry over the same visual scheme, there is a palpable indoor warmth. But Llewyn’s is a lonesome world, where a pitiless mood pervades. His can be an isolated existence, as isolated as a wet, nearly empty highway at night, glimpsed and heard from inside a cold, hollow parked car; this is the type of subtle audio-visual sensation vividly recreated throughout the film. If any single image relates the nature of Llewyn’s character, though, it may be the shot of his unbalanced trudging through snow, when bare sidewalk is all around.

A final notice of appreciation goes to Justin Timberlake and Adam Driver, the former whom I’m convinced could be a phenomenal Sinatra-esque entertainer across the media spectrum if given more appropriate film-related opportunities. Their screen time is brief, but both are excellent with what they have to work with, and during the recording session of the ridiculous pop plea of “Please Mr. Kennedy,” a commercially viable if artistically inferior effort that Llewyn predictably ridicules, they manage to temporarily steal the entire movie. 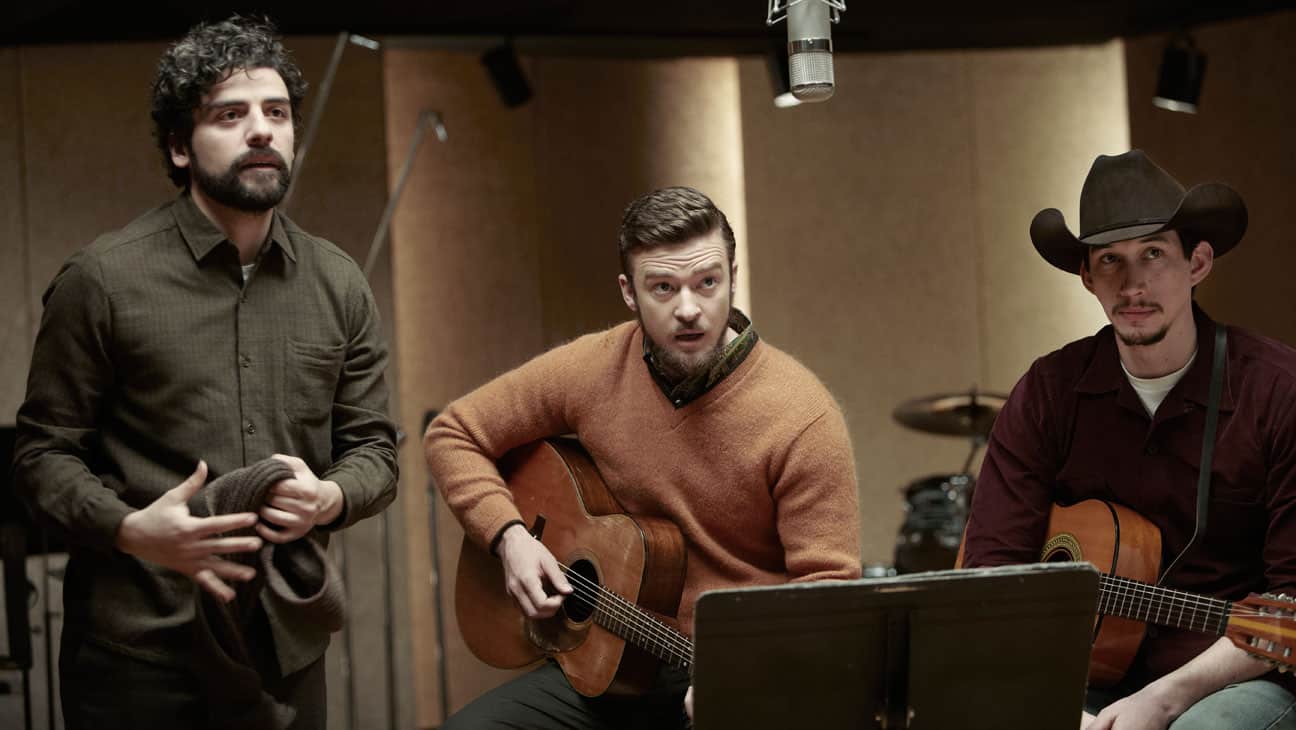 “It’s just music,” says Pappi Corsicato (Max Casella), manager of the Gaslight where Llewyn performs. To a certain extent, he’s right. And that is exactly what fails Llewyn Davis. He cannot see clearly that which surrounds him. He cannot step away from the agonizing business of the industry and the frustration of his fruitless artistic endeavors long enough to appreciate the pleasures of what lies presently elsewhere. He struggles to recognize the inexorable damage his stubborn devotion to the music has inflicted upon his personality and his relationships. But how do you say goodbye to something you love so much?

Llewyn has talent (and so too does Isaac, evidently quite the musician himself), but the harsh truth of any creative effort is that sometimes talent has nothing to do with success. This isn’t the most uplifting notion ever espoused by the Coen brothers, nor is Llewyn the most laudable protagonist in their arsenal of characters, though the nearly comical onslaught of hardships he faces does elicit some sympathy. But in the end, that may be what makes Inside Llewyn Davis such an achievement. It is ultimately a film about failure and the bittersweet relief of giving up. It takes a remarkably well-made movie to bring this depressing theme to a conclusion that still resonates with a sense of optimism and content resolution.