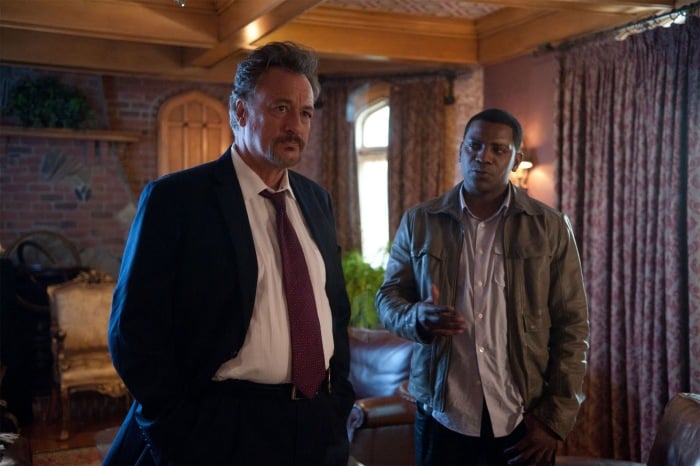 This week, on Torchwood: Angelo returns, Rex calls in the cavalry, Oswald tries to turn over a new leaf, Jilly gets a promotion, Gwen is deported, Jack is shot, and Esther goes on the run

After weeks of delays, things finally start picking up in this most recent episode. With the finale only two weeks away, characters seemingly forgotten from earlier in the season pop back up, reinforcing the feeling that many of the problems of Miracle Day can be traced back to its overly long episode order. The cast is back in top form and a couple notable guest stars make this one of the most enjoyable Miracle Day episodes this season. Though Esther does manage to win the Worst Spy Ever award this week, any frustration from that is wiped away by the fabulous reaction of Gwen upon hearing that her family was put in harm’s way for little to no reason. Jack and Gwen are also back to their usual roles, as each other’s steadfast supporters. It’s great to be reminded of how well Jack knows her- his deflecting of her attempts to take on the CIA agents who detain them is well played. 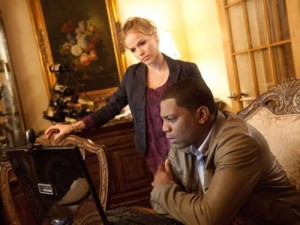 Fans of previous seasons may enjoy the shoutout given to Ianto and, though it does feel a bit out of place, this bit of series continuity is appreciated. More than anything, this episode is refreshing- it veers away from the pitfalls the weaker episodes of the season drove right into. When Angelo’s machines start beeping after Jack’s kiss, one wouldn’t be blamed for expecting it to have somehow woken him up. Instead, it goes the other way. Having Esther’s sister pop back up is a smart move as well- this calls back to what is still probably Alexa Havins’ best scene so far and gives the character the necessary spark of motivation to choose the CIA over Jack, at least at first. After two weeks off, Oswald and Jilly are back, but while Jilly’s arc continues to entertain, Oswald’s feels increasingly unnecessary. We’ll see what comes of it in the final two episodes. Hopefully the investment of time will prove to have been worthwhile.

Other familiar faces are welcome as well- bringing back the CIA team from the pilot is a nice direction to take things, though the hasty character motivation given to Wayne Knight’s Friedkin is about as subtle as his final action. Nana Visitor is a welcome presence as Olivia, but she is mostly wasted, with very little screentime in the series. One can’t help but wonder if more couldn’t have been done with her, particularly given her apparent knowledge and involvement in the mysteries driving the season. It’s always a pleasure to see John de Lancie pop up, and this is no exception. Though perhaps some of the lines given to him are a bit on the nose, he strikes the perfect balance and tone to the character, who is instantly believable as a potential either ally or threat to Jack and one who is unlikely to be impressed or swayed by Jack’s bravado. Here’s hoping we see more of him in the final two entries of the season. 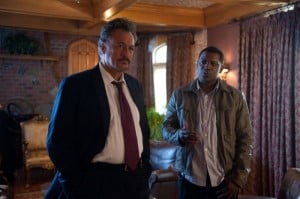 Though we get few answers here, a lot of the filler of the season is wrapped up and enough breadcrumbs are dropped, with little time for them to be revealed as red herrings, to keep things interesting. The episode also ends on a strong cliffhanger, with the Torchwood team spread out, unable to see the road ahead. A nitpick though- isn’t the agent Rex knocked out, the one who caught Esther helping Jack, going to wonder who hit him over the head? It can’t be either Esther or Jack, so he should know they still have a mole, but perhaps we weren’t supposed to notice that. Another issue that has yet to be mentioned, a bit frustratingly, is Jack’s Vortex Manipulator. Yes, we know that they’re not safe to use, yes, we know that the Doctor likes to disable it, but the fact that it doesn’t even get a mention when Jack is desperately looking for a way to escape feels a bit strange, particularly as he uses it several times in the episode. Finally, with Gwen headed back to Wales, presumably, let us hope that Rhys will get to do more in the final two episodes besides answer the phone. He’s proved himself a strong and capable ally in the past. It’d be nice to see that Rhys back again.

There are only two weeks to go, and still (basically) no aliens. Given Jilly’s mysterious contact’s comment that they’re going far, far away, however, this may be about to change. If this comes down to magic blood on a morphic field generator, it may be a bit of a letdown, but at the same time, perhaps it would be more interesting to have the root of the Miracle be something far more mundane and Earthly than in seasons prior, particularly as a contrast to The 456. With so little time left, a vast alien conspiracy is probably out, but who knows. Either way, the prospect seems entertaining, which wasn’t the case last week. It feels great to be interested in where this season is headed again!

What did you think of this episode? Where do you see the season headed? Sound off below!

PS- I’m now on Twitter. Follow @theteleverse to hear about the TV I’m watching and to let me know what you’d like to see SoS TV cover.