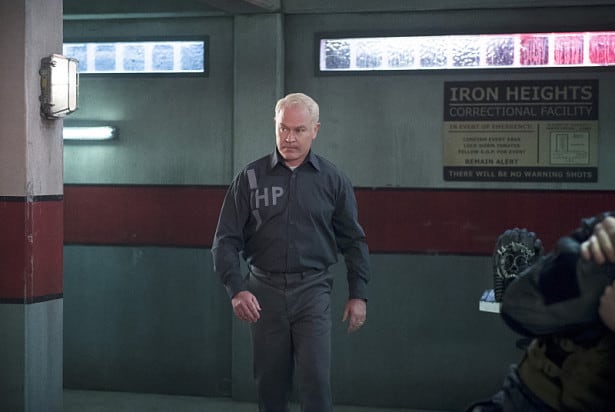 Well, ain’t that some bullsh*t.

No, seriously: from beginning to end, “Eleven Fifty-Nine” is just an awful hour of television. Even in this muddled, utterly unsatisfying journey through Darhktown and Olicityville that is season four, “Eleven Fifty-Nine” stands out as the biggest piece of trash Arrow‘s arguably ever delivered, an episode that not only continues to muddle its central story to the point where it makes absolutely no sense or logic, but doubles down on the inane logic that’s driven its grave-revealing, flash-forward cliffhanger teased at the beginning of the season, ultimately revealing that once again, a Lance woman would perish to serve as motivation for Oliver Queen – only this time, it was Laurel.

Now, I’ve always been the biggest critic of Laurel’s character in Arrow circles; after wasting her character in season one and backgrounding her with a pill addiction in season two, the third season of Arrow provided a wealth of opportunity for her character by transforming her into the Black Canary. Except it was obvious the show never really wanted her as Black Canary: Sara’s absence always weighed heavier than Laurel’s massive transformation as a character, and the show never really convinced us that she embodied Black Canary the way Sara did. Her ineptness during fights, her inability to provide anything but clarity on Oliver’s relationship with Felicity during team meetings, the show’s unwillingness to explore her character as an attorney past season one… all of these things lessened Laurel’s character, even if her reduced appearance post-season one made her glaring flaws as a character much less obvious (it helps that Tommy died, clearing up the show’s laughable love triangle early on).

Knowing they were going to send her off, the writers of Arrow owed it to themselves, Katie Cassidy, and the audience to deliver a powerful final episode for Laurel; but as I noted back when I raged about the show’s decision to kill someone before knowing who it was, it was an easy opportunity for the writers to turn a meaningful choice (killing off a character) into an exploitative, disappointing one. And boy, do they deliver on the latter: not only is her death utterly meaningless to the larger narrative, but Arrow goes to great lengths to suck all the air out of her character before finally killing her off, ensuring that she is a completely useless, wasted entity before sending her off into the sunset.

How do they do that? It begins when Oliver suggests she give up being Black Canary since Team Arrow is falling apart. First of all, f*ck Oliver and his whining – I’m so sick of his sad, brooding face every time Andrew Diggle double-crosses them or he thinks about Felicity… it’s getting to the point that he can’t even do his job, and instead of pulling his team together, he pushes them apart by attempting to torture Andrew behind his back – and more important to this conversation, by telling Laurel to stop doing the very thing she says makes her feel alive. Again, women can’t have it all: Arrow tried to replace Laurel’s romantic presence with an ass-kicking one, and then failed her in that story, so let’s just make her nothing but the next city D.A. (under a widely corrupt mayor, to boot) in Central City, because she just can’t take all the stress of everything.

Forgetting how brazenly Arrow telegraphs her death from this point (when they’re getting ready to take on an escaped, clownishly murderous Darhk, she talks about it being her “last night” – never a good sign on TV), how she actually dies is laughable, and undercuts the tension Arrow‘s flailed at building all season. First, everyone is rendered helpless by Darhk’s resurrected powers (thanks Andrew Diggle), and then he picks up Laurel and stabs her in the side – and then he just walks away, neither making sure she was dead, or forcing everyone else to revel in her helplessness (which in its own way, would be an eerily accurate depiction of her character across four seasons). Moments later, she’s fine in the hospital – and with her last healthy breaths, she exits the series by telling Oliver she’s still in love with him, and that she carries around his picture of her everywhere they go. Her last lines of the series are her telling Oliver that it’s ok he’s not in love with her, and that she hopes him and Felicity can work it out…. are you f*cking kidding me? Seriously, Arrow?

And then she dies – but not before an off-screen secret is told to Oliver, leaving the door open for her to not actually be dead, or for some other stupid reveal we probably won’t find out about for a few episodes. Maybe she knows who employs Malcolm’s random assemblage of ninjas? Maybe she’s got some insight into Felicity’s emotional state, since she’s so invested in the Olicity nonsense? Meh, who cares: as unceremoniously as they reduced her character to nonsense background fodder over three seasons, Arrow pronounces Laurel dead, then revels in Quentin’s pain over losing a daughter for the THIRD time in the series, a thoroughly accurate representation of this show’s propensity to make the same mistakes over and over, with no sense of growth or ambition whatsoever.

So now Laurel’s dead – or maybe she isn’t, because this is Arrow, after all. But Laurel’s death is still a significant moment for Arrow, just probably not the one the creative team hoped. This is the kind of move that alienates a fan base; even as a viewer who has mostly hated Laurel Lance’s character throughout the series, her empty, blatantly sensationalized death lowers the stakes even further for a season that reduced itself to incomprehensible blabber even faster than season three. At this point, I don’t know or care who is aligned with Damien Darhk; it’s amazing how this show has made the Central City and Lian Yu story lines equally boring and weightless, but they’ve done it with “Eleven Fifty-Nine”, an episode that doubles down on the tepid action sequences and impossible-to-follow alliances of season four, by throwing a wildly exploitative, empty death into the mix, and trying to present it as an important turning point of the season. If anything, it’s a seminal moment for the series, a moment where viewers finally fed up with the show’s machinations and lacking characterization can make a clean break, weeks before the Darhk story reaches its inevitable, unsatisfying conclusion. Arrow‘s never been great at ending a season – and considering how badly its bungled the part it can do well (the middle – remember the middle of season two?), the stakes couldn’t be lower for the season’s impending conclusion.