In addition to horror, sci-fi, action, and cult movies, this year, Toronto After Dark brought us a stoner comedy: High School. To be fair, High School certainly has its funny moments. If you’re the sort of person who doesn’t mind an avalanche of hijinks and gags about weed and high school that are bound together by a fairly straightforward plot, then by all means, this is a film for you. Unfortunately, hijinks, gags, and an awesome performance by Adrian Brody are all this film has going for it. 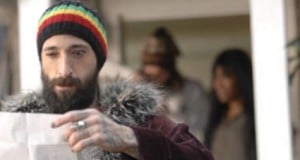 Though the plot takes its sweet time to get started, the premise defiantly raises the bar for all high school movies to follow: two estranged pals, Henry Burke (Matt Bush) and Travis Breaux (Sean Marquette) – and yes, that is pronounced ‘bro’ – decide to steal some legendary dope from local dealer Psycho Ed (Adrian Brody) in order to make pot brownies and get their entire school stoned, thus foiling uptight principal Gordan’s (Michael Chiklis) plan to expel students after he puts them through mandatory drug screening. Obviously, this plan goes awry, and the two spend the rest of the film solving predictable but ridiculous problems and rekindling their friendship. Apparently, High School did well at Sundance; for the life of me, I can’t figure out why.

Tired plot and stock characters aside, there are some genuinely funny parts in this film. Bush and Marquette have excellent comic presence, and Adrian Brody should play a deranged drug dealer more often. There are other good bits too; the film begins with three-time spelling bee champ Phuc – yes, say that name out loud too – getting stoned and going off on a foul tangent before judges and parents. Unfortunately, there are some lame comic moments as well: old people saying rude words can only be funny so many times, and frankly, we have YouTube for that.

Some reviewers are predicting that this will become a new cult hit. I think that is fairly optimistic. More likely: a modest opening weekend followed by awesome DVD sales. And honestly, we all have someone in our lives who could use a new stoner comedy.