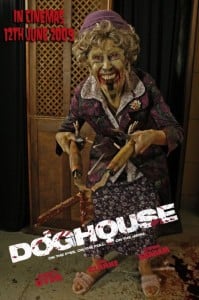 Director Jake West’s British horror-comedy Doghouse is an absolutely exhilarating gore-fest.  Two parts Shaun of the Dead and one part Hangover, Doghouse is a recipe that horror fans should devour.

When Vince’s (Snatch’s Stephen Graham) marriage collapses, five of his buddies attempt to cheer him up by taking him to a remote village where the women outnumber the men three to one.  Determined to sever contact from their bitter wives, Neil (Severance’s Danny Dyer) confiscates everyone’s cell phone and hides them away.  Their objective?  Drown Vince’s sorrows at the local pub and take 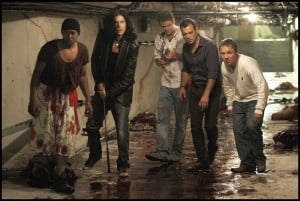 pleasure in the feminine hospitality, but things go horribly awry when the town’s women turn out to be homicidal, bloodthirsty zombies.  Suddenly, our friends must use their sharp wit and MacGyver ingenuity to escape their hell and return to their normal hell back home.

Screenwriter Dan Schaffer depicts his characters as loud and obnoxious philanderers – a bold move for a horror-comedy because if audiences are not emotionally invested in the characters, they couldn’t care less for who lives and who dies.  This often spells doom for a horror movie’s success, but Schaffer effectively generates their likability through their affection for one another (and of course their antics) so we can still root for them. 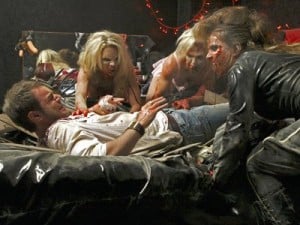 huge sword, and Bubbles – the obese, finger-eating housewife.  Schaffer amps up the tension when these women chase, torture and bludgeon some of their victims (not all the guys come away unscathed); however, much of the film’s charm is its constant flow of dark humour. Despite the threat that the zombie women pose, our oversexed chauvinists still can’t resist objectifying them.

Doghouse is proof positive that the Brits are cornering the market of entertaining horror-comedies (see Severance, The Cottage and Shaun).  Hopefully, with the success of Zombieland, this hidden British gem will find its way to North American audiences soon.