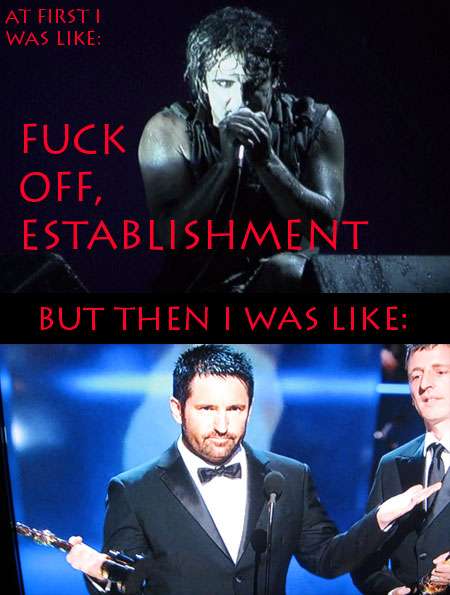 Now that Nine Inch Nails frontman Trent Reznor has won himself an Academy Award for his work on the Social Network score, it seems he has a lineup of other filmmakers wanting to work with him. While he and partner Atticus Ross are currently scoring Fincher’s next film, The Girl With the Dragon Tattoo, EW reports that Reznor will also be scoring and acting in, Timur Bekmambetov‘s adaptation of the Seth Grahame-Smith novel Abraham Lincoln: Vampire Hunter.

EW reports that the industrial rocker will play Jack Barts, the man who kills Lincoln’s mother and sets the story in motion.

Abraham Lincoln: Vampire Hunter will also star Benjamin Walker, Anthony Mackie, Dominic Cooper, Mary Elizabeth Winstead and Jimmi Simpson. The epistolary-style book is written as a biography of Abraham Lincoln, based on “secret diaries” kept by the 16th President and given to the author by a vampire named Henry Sturges.

The project was first announced in March 2010 when Tim Burton and Bekmambetov paired to purchase film rights and to finance its development themselves. The book’s author, Seth Grahame-Smith, was hired to write the script. In the following October, Fox beat out other studios in a bidding war for rights to the film, having made a detailed pitch about the film’s production, marketing, and release. A release date was scheduled for June 22, 2012, and filmmakers plan to produce the film in 3D with a production budget of $69 million.