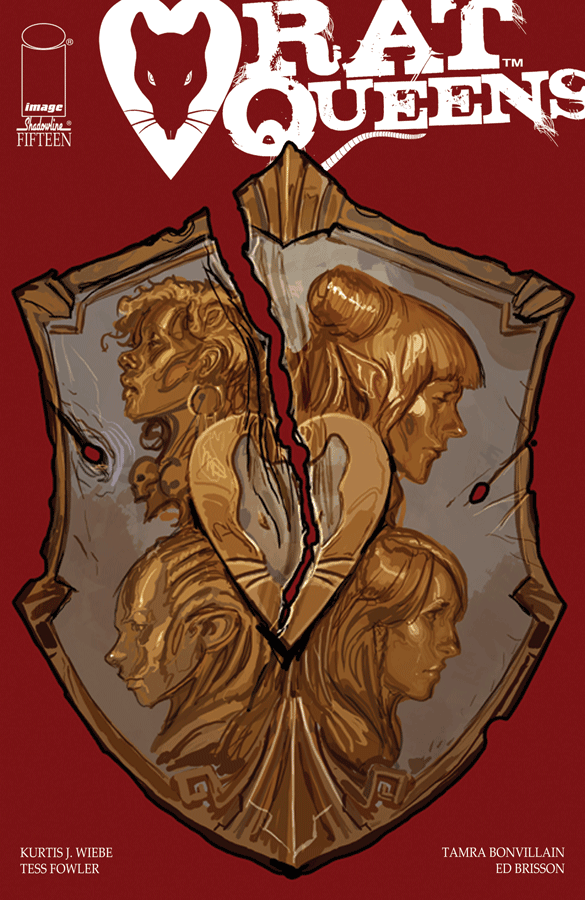 Rat Queens #15 finishes out the “Demons” arc with revelations and character rebirth, all driven by the question: demon or Queen? At the heart of this is a he said/she said retelling of how Hannah got kicked out of Mage University that ends with miscommunication and missteps. This final issue of the arc slams the reader in the best narrative ways and puts an emotional cap on what has been a stellar arc by Wiebe.

Hannah’s backstory has been at the forefront of the “Demons” arc, with the secondary story belonging to Dee. In both, the characters have grappled with their estranged families. In both, they’ve reunited with a family member and reevaluated the relationship based on the new encounter. And here those two private backstories collide with heavy consequences.

Hannah’s story line has explored what it meant for her growing up as a half-human, half-demon child. It has been an internal war between what people assume about her and what she was taught to be by Gerard, and from afar by her mother. The community that knew her mother judged Hannah with hatred and scorn. Gerard attempted to protect her from that, but he could only do so much, and he felt the best he could do for her was send her to Mage University, though it turns out she wanted none of it. As she shares with the other Rat Queens the story of why she got kicked out of school, judgement is the central theme. Though these words come from Senoa’s inaccurate version of the story, Hannah is reacting to what she measures as a “circle jerk of judgment.” Her mother warned her humans are awful, and now she speaks and acts defensively and defiantly. She tells them the truth, but she’s unwilling to speak to her motivations, causing Dee to question who she’s acting as: demon or Queen.

Hannah is pushing her friends away, likely for many reasons. She anticipates their judgement and scorn, though they repeatedly reassure her of support. Given that, she’s likely also trying to protect them from what she deems her problem and a dangerous solution. But these aspects are exacerbated by Dee’s brother Senoa, who has already judged Hannah as a demon unworthy of respect or love. His repeated prods at Hannah push things over the edge. Hannah decides if Dee even questions whether she’s a demon or Queen, she might as well be the demon.

Tess Fowler has come to own these characters more and more with each issue, and the character rebirth given to Hannah here is a perfect way to fully claim her character. Fowler gives Hannah a sexy rebirth with a stripping of clothing, full nudity, and a punk AF haircut that shows off her horns. Hannah reappears to the Queens and throws the question of identity back onto Dee, but Dee makes it clear: “This is your narrative, Hannah. Your choice.” She appears to have chosen to be a Demon Queen.

But, in fact, Hannah’s been led to this choice by many hands: Gerard, her mother, and, now, unseen, the demon Hazirel, who has taken possession of Senoa’s body. As many secret machinations make up the clockworks behind the scenes, Betty, at least, is ready to air them all and makes an earnest attempt to kick start the share session. She reveals who she is and why she’s on the run, but Hannah’s feeling too betrayed to pick up the ball, and the group gets torn asunder when guards come to arrest Hannah for conspiracy.

See also  The Films of Val Lewton: 'The Leopard Man' and 'The Seventh Victim'

Not having the power to go after Hannah immediately, the Queens stop to make a plan and visit Betty’s homeland. Meanwhile Hannah is left in the same void prison we saw Gerard in earlier. She gets a special visitor–her old demon pactmate Hazirel, who offers her freedom (from the prison) for slavery (to him). He also tells her Gerard was executed (though that could easily be a lie). Why is this demon so set on having Hannah under his control? His brief conversation with Senoa lays out the motive of love and suggests perhaps he is part of Hannah’s demon side of the family. Maybe even Daddy Demon himself?

Image teased that Rat Queens #15 would change everything forever. I expect that’s true, though I do have hope that the Queens will bring Hannah back from demon-enslavement and vengeance. In the meantime, a trip to Betty’s childhood home promises lots of fun to come in the next arc.