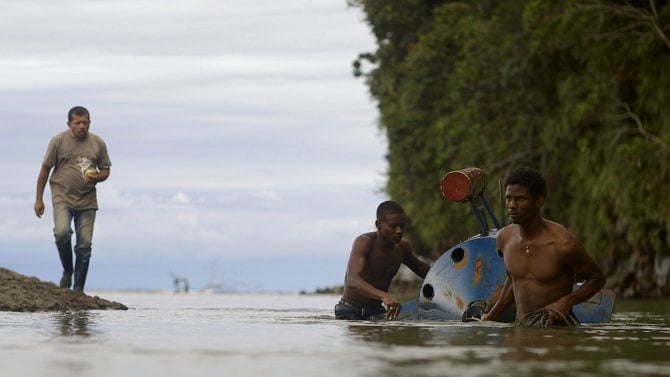 Jacobo (Jarlin Javier Martinez), a world-hardened but innocent fisherman, and naïve, 19 year-old Delio (Cristian James Abvincula) set out on a dangerous drug mission on the coast of Colombia in Josef Kubota Wladyka’s directorial debut. This film is reminiscent of the recent La Jaula de Oro: young lives searching for escape, caught amidst a harrowing circle of inevitable violence and peril. Wladyka shoots entirely on-location and it shows. There’s a real sense of place here, made more authentic by small touches: children jumping from waterside bungalows into the bay as a boat approaches; makeshift motorcycle-driven railroad carts, their wheels precariously hugging the thin strips of train-track metal; freestyling teenagers on the street. 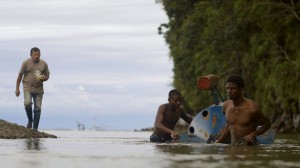 Like Jacobo and Delio, Wladyka and cinematographer Alan Blanco’s camera moves frequently forward. It plows through choppy waters, creeps across calm marshes, hurtles on railroad tracks and into tunnels, and runs through thick jungle.  The result is a foreboding feeling of relative progress. The two are moving to their goal, but will that actually move them forward? For Jacobo, his ultimate goal of reaching Bogota seems increasingly doubtful, while Delio’s dreams of a Scarface-like existence change precipitously on their journey.

Buoyed by two very strong performances, Manos Sucias is confident and exciting. It’s centered mostly around two extended set pieces: the fledgling dealers’ interaction with a racist boss, and their desperate search for a thief. Despite relying on two elongated sequences, the pace never settles.