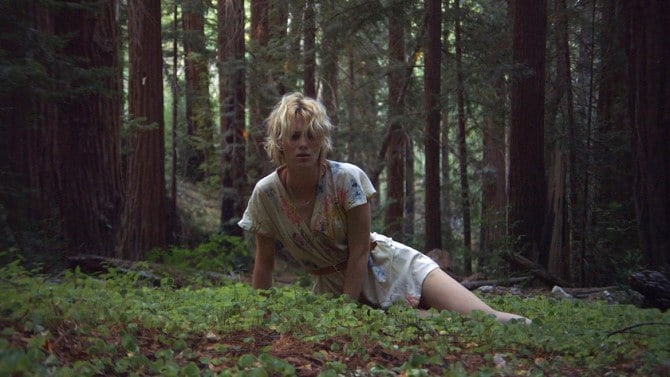 Best friends, both actresses, Beth (Caitlin FitzGerald) and Anna (Mackenzie Davis) travel to Big Sur for a weekend getaway. Beth is sweet, quiet, mild-mannered, apologetic, and soft-spoken. She is enjoying a good measure of success but is disappointed with the quality of roles she’s getting. Anna is aggressive, loud, confrontational and severe. Her acting career is going nowhere and she’s loosing control of herself.  She’s being slowly devoured with envy over her best friend’s fame, even if the roles are not ideal. Anna is both revolted by and longing to have the kind of femininity Beth embodies that seems to be the key to success as an actress.  The demure, weak,  helpless act seems to make Beth more attractive and easy to cast. Her star is steadily on the rise while Anna’s assertive, brash manner turns everyone away. As she continues to discover all the success that Beth has been hiding from her, Anna’s burning fever of envy, hatred, and lust for success drive her to passionately murder her best friend. When Beth is gone, now Anna becomes the focal point of the film, having succeeded in destroying her competitor. Scenes of Beth are replayed with Anna now as the star.

When she arises the next day, Anna transforms herself into Beth. Now she is shy, mild-mannered, soft-spoken, amiable, and sweet. She embodies the attributes of Beth so masterfully that in many scenes it’s hard to tell she’s still Anna. As this new, more pliable, innocent girl, Anna instantly starts to find more success. People find her more attractive and her life starts to almost magically open up for her. Though, Beth begins lurking as a ghost, embodying the aggressive, violent and forthright woman that Anna also tried to kill when she took on Beth’s persona. The only way for Anna to find peace is to come to terms with the full expansion of herself as a woman.

I had the wonderful luck of the director and screenwriter speaking after this screening. Sophia Takal and Lawrence Michael Levineare are married and talked openly about the film’s origins. Sophia shared what inspired her to make this film was that she was Anna and this film was a way to process the experience she was having as an actress. She saw her girl friends who were masters at playing the shy, deferential, ultra feminine sweet girl in the Hollywood game getting the roles and finding success. Sophia abhorred that role but also admonished herself for not being “good at being a lady.”  When an audience member asked why Sophia made these ideas into such a violent film, the director expressed that it was because she felt violently angry about the pressures to be a certain kind of woman to succeed and her inability to embody that woman. Always Shine was a way to articulate these ideas and help her to find the expanded, integrated experience of being a woman that worked for her, one that embodied a natural mixture of both sides of the spectrum.

Mackenzie Davis won for the festival’s Best Actress in a U.S. Narrative Feature Film.   And Sophia Takel delivers a stunning film that perfectly embodies the war women often have with themselves and each other.