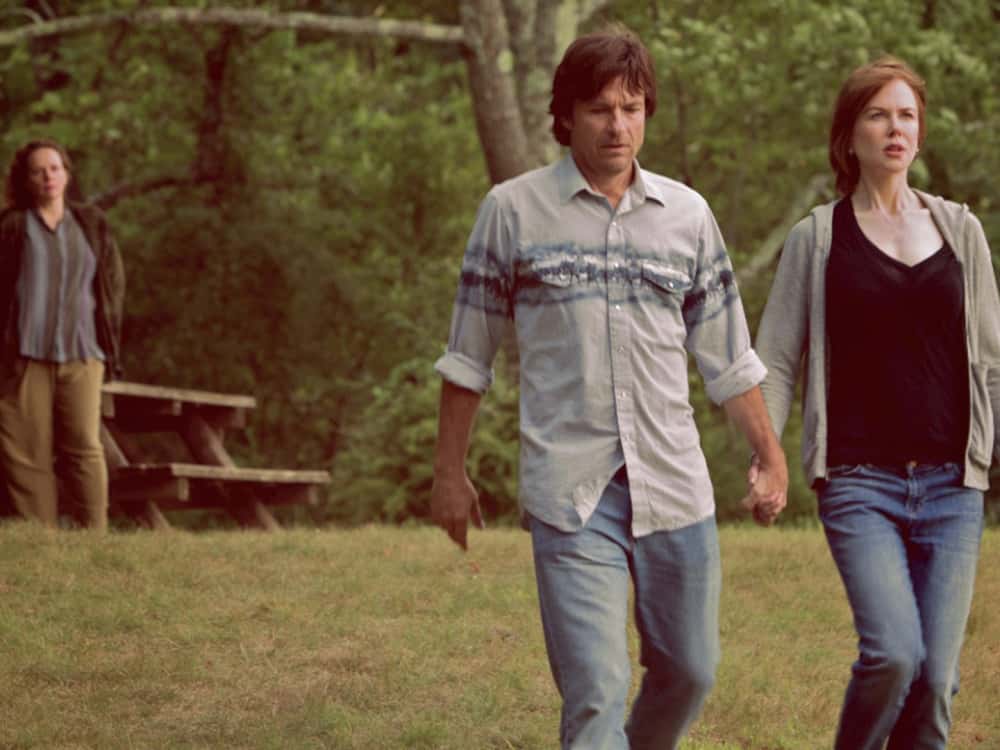 When I tell my friends the premise of The Family Fang the answer is always “That’s horrible” and I follow with “But, it’s really funny! Just see it.” Camille (Kathyrn Hahn/Maryann Plunkett) and Caleb Fang (Jason Butler Harner, Christopher Walken) have dedicated their lives to being artists who create elaborate and public improvisational performances designed to invoke adverse reactions in unsuspecting participants (some people would call them malicious pranks). Calling them Child A and Child B, the parents frequently pushed their kids to take part. As adults, Baxter (a writer) and Annie (an actress), struggle to find stability and where reality begins and fantasy ends. This is intensified when their parents disappear and leave them behind on a deserted road in a car covered in Caleb’s blood. Is it an elaborate performance or were they murdered? Which is worse?

Perhaps the best scene in the film is Baxter in the hospital from a head-shot wound from a potato gun, when he calls Annie, who has just slept with a journalist doing a big story on her. Baxter says “They called Mom and Dad! You have to come get me!” What they understand is that Celeb and Camille will celebrate their children’s destructive behavior as radical, living life to it’s fullest, and wonderful self-expression and do nothing to protect them from harm’s way. The adult children band together to push back and are bitterly rejected. They also discover the depth of their mother’s fear, anger, and devotion at all costs towards Celeb.  When the bloodied car is found after the parents abandon them for no longer participating in the pranks, the Fang children must finally reckon with their childhood.

See also  The Church of Campbell

What Batemen pulls off in The Family Fang is impressive. He clearly portrays the harm the parents are doing to their children in a way that’s also incredibly humorous. Arrested Development’s influence is felt here but The Family Fang is more nuanced and intimate.  He then actualizes the truth about their parents’ death in a way that feels inspiring and deeply hopeful for the Fang children. It has great takeaway lessons about family that resonate as insightful, even helpful, without making itself into a “life lesson” film. Bateman was especially great in showing the confusion and inertia Baxter’s upbringing created for him and his organic process of turning that hardship into great success. That said, Kidman’s performance wasn’t her best. She seemed disconnected from Annie and would slip in and out of the American accent. The parents young and old excelled at creating parents you loved to watch but would never want to have.

I also found the theme around these parents very clearly portrayed. These parents believe they are dedicating themselves to their ideals about art but really they are fundamentally terribly dysfunctional people. The children have to extricate themselves from their parent’s overpowering philosophies about life in order the thrive. The idea of parents jubilantly sacrificing their children and damning them for not playing along is a risky subject.  Doing all of that with a sense of humor is nearly impossible and Bateman excelled at it.  Overall I loved the film. Portraying a horrific family in a funny and touching way is extremely difficult and Bateman nailed it.