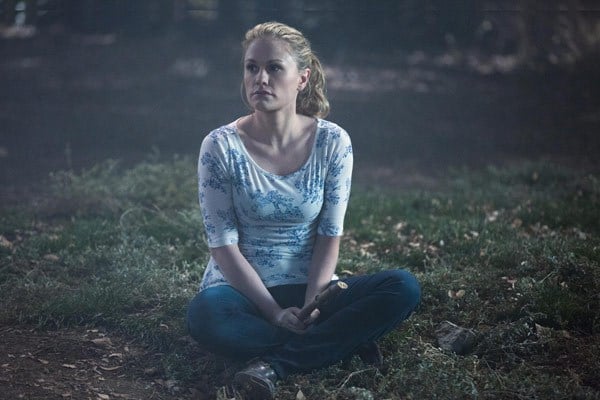 On this week’s True Blood, Sookie risks her life to save the missing townspeople, Sam confronts the Bon Temps mob, Pam tries to revive a disinterested Eric, Sarah Newlin returns, and another major character perishes.

From the very beginning of the show’s pilot, True Blood has done its best to explore the idea of belonging and fitting into a world that doesn’t want or accept you. Sure, the show originally used vampires as a metaphor for LGBT rights, but, with the final season, the struggle to belong is much more rooted in the show’s supernatural and small-town environment.

Sookie, who has progressively supported the vampires and other supernatural creatures inhabiting her world from the start (thanks, of course, to her own slightly-supernatural existence), is still trying to get the townspeople of Bon Temps to accept her. She’s desperate for them to include her, but she loves them, too–so much so that she’s willing to put her life on the line to save a handful of townies kidnapped by Hep-V vamps. Her plight is admirable, but it unfortunately ends in tragedy. The poor woman can’t catch a break, even in the show’s final season. A lot of fans of the show have hated on Sookie for years (mirroring their fictional counterparts), but Sookie is not a bad person, or even a bad character. Her desires are very simple, yet the show keeps punishing her for them. Undoubtedly she’ll be blamed by some of the show’s audience for what transpires during “Fire in the Hole,” but True Blood showed us from the beginning of the season that the stakes are very high right now and everyone’s in danger; the deaths this season lie solely with the enemy, i.e. those pesky Hep-V vampires. Sam also finds himself trying to belong in a town that doesn’t want him. Rather than spend their time fighting the real enemy, the Bon Temps townspeople are hunting their own. It’s ridiculous, but still as realistic as it was last week.

Also like last week, “Fire in the Hole” sprinkles little bits of humor among tragedy. Sookie and Bill share a particularly funny moment when Bill feeds Sookie his blood, and she admonishes his fangs popping out (“I have a boyfriend now”), while Lafayette humorously dances alone in his house–even with minimal screen time, Nelsan Ellis continues to keep Lafayette vibrant and alive.

Meanwhile, Kristin Bauer van Straten deeply humanizes Pam. When she tells Eric about feeling Tara’s death, it’s very, very sad, as is her desperation to snap Eric out of his depressive funk. Her situation subtly mirrors Sam and Sookie’s, as Pam’s place has always been at Eric’s side, though he no longer wants her around.

Speaking of Eric, it feels a little late in the game to be introducing new characters and storylines that appear to have very little relevance to the situation at hand. Eric’s mid-eighties love Sylvie feels majorly unimportant in the wake of everything else currently happening. Maybe the reverberations of her existence will be felt in the episodes to come, because otherwise the flashbacks involving her feel like a massive waste of time. Even Bill’s flashback seems more relevant, despite how often True Blood has explored Bill’s family and time in the war, as they further reinforce the season’s (and the series’) theme of belonging.

Luckily, Sarah Newlin’s return is bringing back the Eric we know and love, because mopey Eric is definitely no-fun Eric. And it’s about time for his and Pam’s current storylines to mesh with the others.

Even with the introduction of seemingly-irrelevant characters, “Fire in the Hole” is an excellent, well-rounded episode.

Bonus: The end credits song is “Fire in the Hole” by Sara Isaksson and Rebecka Törnqvist.