Lynch, Soderbergh, Rush, babies…every film festival has its own hype machine, even one as pridefully heady as Hot Docs, North America’s largest documentary film festival and an international gathering place for those in the art and business of non-fiction.  For eleven days, downtown Toronto will become a smorgasbord of doc and I am wicked stoked and salivating.  Some of the bigger-buzz films I’m looking forward to are David Wants to Fly (Dir David Sieveking – Germany, Austria, Switzerland), an exploration of wacky filmmaker David Lynch and his devotion to the practice of Transcendental Meditation; And Everything Is Going Fine (Dir Steven Soderbergh – USA), a collage of archival footage put together by Girlfriend Experience director in honour of late theatre artist Spalding Gray; and, of course, Babies (Dir Thomas Balmes – France), an unholy feast of cute that will undoubtedly spike the fecundity of audiences everywhere.

It’s worth considering, however, that Hot Docs has a remarkably higher percentage of hidden gems than your average festival, if only because docs generally get a fraction of the ink and moolah that fiction narratives rake in.  So, as a public service, here are some of my picks of lesser-known films in case you’re in Toronto and want to evolve from doc n00b to doc guru: 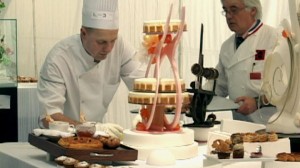 Riding the wave of gastro-pop as popularized by Food Network series like “Aces of Cakes”, this movie goes down easy like a perfectly-balanced cream puff.  It’s a fascinating look into the world of pastry without the glaring stage lights and hip underscoring of reality-cooking as we know it, not in the least because all of the chefs involved are French.  This isn’t nationalistic bigotry: in France, the highest honour a pastry chef can achieve is the Meilleur Ouvrier de France (or ‘M.O.F’, often pronounced ‘muff’, just for the benefit of you snickerers).  Those who achieve M.O.F. status are recognized by their peers and countryfolk (as well as the President of France) as true masters of their craft and it is no understatement to say that the French take their pastry seriously.  As they should: these chefs (who are, in the film at least, all male) perform amazing feats of engineering and art, all from sugar, cream and flour.  If you can barely manage scrambled eggs, this film will hardly boost your culinary self-esteem, but it will give you a look at the pride and dignity of those who devote themselves to the elevation of epicurian delights.  It even gets a little tearful near the end when you finally figure out which of the chefs pass the grueling exam (held over three days and resembling a crash course in masochistic lollipop-making) and are knighted with the red, white and blue collars of distinction.  Those who don’t make it try and try again, some devoting more than a decade to this pursuit.  Those who do, continue their careers as changed men, honoured and revered as the best in the craft.  The rest, as they say, is food porn. The Woman with the 5 Elephants (Dir Vadim Jendreyko – Switzerland, Germany)

In this quiet and lovely film, we follow the work and history of Swetlana Geier, a translator of Russian literature into German.  Geier – nearing 85 in the film – is every inch the sweet, old woman and there is enough footage of her cooking heavy German meals to make you wish she were your grandmother.  But that image hardly diminishes what a remarkable and remarkably articulate woman she is: born in the Ukraine and emigrating to Germany during the Second World War, Geier posesses an intelligence that comes from a life full of hardship tempered with a deep appreciation of beauty that is rarely seen.  Watching her work, scrutinizing adverbs and commas in Dostoyevsky, you know that you are in the presence of someone who contemplates the smallness of small actions and returns with poetry.  Watching the many lingering shots of her face, wrinkled in age and contemplation, you wonder what she is thinking and whether or not you’ll ever attain such a sensitivity to life’s countless shades of meaning. Moreso than in fictional narratives, the quality of a doc is dependent on the quality of its subject matter and here the filmmakers hit the jackpot.  Meet Dr. Nakamats, an 81 year-old Japanese Ig Nobel-winning inventor, who is part charming genius eccentric and part enigmatic millionaire brat.  This is a guy who sleeps four hours a day, photographs every meal he has ever eaten and purposely deprives his brain of oxygen in a swimming pool to get ideas for new inventions.  He proudly tells you at the beginning of the film that he holds more than 3000 patents, compared to the 1098 that Edison held, for a variety of inventions that range from the practical and well-known (the floppy disk) to the decidedly more obscure (an aphrodisiac called ‘Love Jet’ that you’re supposed to spray behind your ears and on your genitals).  The film is playful, but not always kind; there are a couple of instances where the filmmakers haven’t shied away from showing the Doctor’s mini tantrums.  However, you kind of overlook Nakamats’ inflated sense of self because his inventions are often so fantastical and his person so entertainingly weird.

If you leave the theatre feeling your curiosity piqued but not satisfied, that’s totally understandable; there is a sense that filmmaker and subject are at arm’s length.  My instinct was to assume that Dr. Nakamats – a very brand-conscious man to say the least – wanted to maintain his persona and the filmmakers used what they got.  However, I am possibly wrong, for at the end of the film, Nakamats says of his filming entourage: “These people edit out all the good stuff and only show the weird scenes.”  I’m sure that has more than a ring of truth, but the weirdness is good nonetheless. The World According to Ion B. (Dir Alexander Nanau – Romania)

Ion Bârlădeanu lived in an alleyway behind an apartment building for twenty-two years before he got discovered by an art dealer who was drawn to the surrealistic pop art collages he’d been making out of discared magazines and newspapers.  It sounds like the plot of a quirky, European crowd-pleaser with a bouncy Amélie-esque score, but in doc form we are spared the trappings of forced drama and happenstance and instead are given an entirely plausible but no less remarkable story of the treasures found in the gutter.  Growing up in a communist regime under Ceausescu, Ion spent his early adulthood working menial jobs that nobody wanted as a protest to the government and dictator he despised.  Jailed, released and discarded, he was taken in by a kindly building superintendant and allowed to sleep on a mattress by the building’s dumpster.  His neighbours are comprised by the accepting and the scornful, and all are surprised and awed when he suddenly becomes the art world’s newest star.  The plot, though, is secondary to what makes Ion so remarkable: his art.  His collages are deftly composed, absurd, shocking, political and funny.  You can imagine his images silk-screened onto t-shirts and sold at some Queen West altar of hip.  He’s compared to Warhol, called a genius and showcased in galleries full of people who are worlds away from the life as he’s known it.  If the film were comprised entirely of still images of the collages with voice-over, I think I would’ve been completely satisfied, because his art does what all great art does: combine humour and rage, the personal and the political, a reflection and a denunciation of society as seen from someone who watched history pass from its fringes.  Bârlădeanu doesn’t exactly come off as personable, but through his art he says so much more about himself than any amount of gallery-hype ever could.

Hot Docs runs from April 29 to May 9, 2010 in Toronto.  For screening schedules, visit www.hotdocs.ca