Twisted Christmas Movies You Must See

This holiday season, when the weather outside is frightful, instead of curling up inside watching wholesome Christmas movies such as It’s a Wonderful Life or A Miracle on 34th Street, consider these frightening alternatives to jingle your bells. 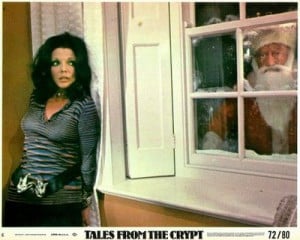 All Through the House

In the 1972 horror anthology, Tales from the Crypt, a bitter housewife (Joan Collins) cracks her husband’s skull open for Christmas, but before she can make it look like an accident to collect on the insurance money, a homicidal Santa Claus interrupts her plans. The other stories in Tales from the Crypt are as predictable as they are dull.  The film’s only redeeming feature is All Through the House, which kicks off the anthology series, but sadly runs barely over 10 minutes.  Collins plays the femme fatale/damsel in distress convincingly, and her terror is what drives the film’s tension.  Despite being obviously dated, All Through the House is still a solid thriller with a couple of good scares. In Sheitan, 4 clubbers accept a young girl’s invitation to her farm after a rowdy Christmas Eve night in Paris.  There, they meet Joseph, the overzealous and racist farmhand (played delightfully by Vincent Cassell), who welcomes them with open arms, but has sinister plans in store.  Writer-director Kim Champiron takes his sweet time disturbing audiences with an assortment of depravities, such as incest and bestiality.  Just when you think something horrific is going to happen, Champiron’s original script jerks you around a little longer before delivering the ghastly goods.  Finally, when we’re introduced to the family’s strange collection of dismembered dolls, Joseph’s sinister plan for the kids becomes abundantly clear and the pay off is both shocking and amusing. Santa Claus takes “naughty or nice” to new levels when he goes on a killing spree on Christmas Eve.  After little Billy is traumatized seeing a killer dressed as Santa Claus massacre his parents, he develops more than just an aversion to Old Saint Nick – he sees blood.  When a nun forces him to sit on Santa’s lap, Billy violently attacks him.  The events take a turn for the worse when an adult Billy finds himself wearing the Santa suit and goes insane, slaughtering every naughty person he can find.  So is the premise of Silent Night, Deadly Night – the controversial 1984 film which was pulled from theatres for its sadistic representation of a child’s icon.  Although the film has its share of macabre killings, it’s comical to see ruthless nuns force Santa Claus on a boy who is clearly devastated.  Interestingly, Silent Night, Deadly Night was only protested for tarnishing Santa’s reputation and not the Catholic Church.  Indeed, these nuns require a course in sensitivity – but I digress.  Silent Night, Deadly Night is a guilty pleasure that should appear on your holiday viewing wish list. Professional wrestler Bill Goldberg dons the red suit to play a nasty Santa consumed with killing everyone from carollers to strippers in the comedy-horror Santa’s Slay.  The pandemonium quickly starts when the film opens with Santa crashing a family dinner (James Caan, Fran Dresher and Chris Kattan make cameos) and killing everyone using a Christmas tree star and turkey leg as his weapons of destruction.  As legend would have it, Santa is free to pillage and plunder after 1000 years of bringing joy to children, and the only ones who can save the day are a teenage couple and an old man.  Goldberg’s Santa is more terminator than jolly and his delivery is superb.  Director David Steinman’s script is packed with enough sly one-liners and hilarious kills (before Santa impales someone with a stripper pole, he’s conscientious enough to spray it with disinfectant to avoid germs) to make Santa’s Slay a perfect stocking stuffer. Inside (AKA À l’intérieur)

Without a doubt, there are few horror films more vicious or bloodier than Alexandre Bustillo’s Inside – a film that should come with a warning label specific to mothers.  4 months after suffering a near fatal car crash, a widowed and pregnant Sarah (Alysson Paradis) is home alone on Christmas Eve night when she is disrupted by a strange woman (Béatrice Dalle) at the door.  When Sarah refuses to let the woman in to make a phone call, the stranger reveals that she knows her husband is dead.  Scared for her life, Sarah calls the police, however the woman is no where to be found.  Sarah then retires to bed, but is suddenly awakened to find the woman piercing her pregnant belly with a pair of large scissors.  The events that follow result in so much bloodshed and butchery, it’s enough to make any seasoned horror-fan wince in discomfort.  Dalle is brilliant as the deranged woman bent on killing everyone who stands in her way of getting to Sarah’s unborn child.  Her villainess rivals most cinematic villains in recent memory.  Lately French horror has pushed boundaries further than most people care to venture (High Tension, Martyrs and Frontière(s) to name a few) and Inside is proof of that.  It’s hard to recommend this film to just anybody, but if slaughter and mayhem is your delight, then Inside comes gift wrapped for you. An escaped mental patient harbours himself in a sorority house and kills unsuspecting girls without detection in Bob Clark’s Black Christmas – a film that inspired such horror classics as When a Stranger Calls and Halloween with its clever phone plotline and killer’s point-of-view.  Before there was a Michael Myers or Jason Voorhees, there was Billy, a sexually-repressed psychopath who gets his kicks prank calling sorority girls and making lurid comments before murdering them.  Despite being over 35 years old, Black Christmas lives up to today’s horror standards with its perfect blend of sexual witticisms and quick kills.  The film boasts an impressive cast (especially for an independent Canadian production), which includes Olivia Hussey (Romeo and Juliet), Keir Dullea (2001: A Space Odyssey) and John Saxon (Enter the Dragon), but it’s a then unknown Margot Kidder who steals the show with her brash sauciness.  Black Christmas is evidence that you don’t need buckets of blood to scare audiences. Clark’s subtle camera work and creepy dialogue provide plenty of tense-filled moments and his abrupt climax make Black Christmas mandatory viewing for horror aficionados.