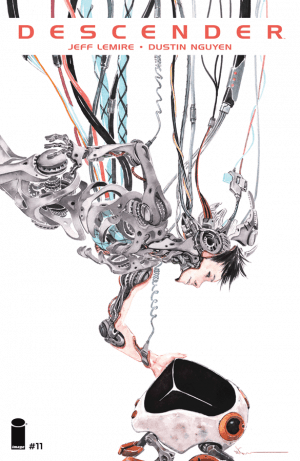 In the hideout of the robot rebellion known as the Hardwire, Tim-21, Telsa, and Dr. Quon appear to be safe as long as Tim-21 agrees to help the Hardwire and their leader, Psius, find out the secrets of the galaxy-destroying Harvesters. But Telsa has her suspicions that the Hardwire has ulterior motives.

Meanwhile, Andy and Blugger, along with Tullis, Driller, and Bandit, head to the wastelands of Sampson and ask help from the Between, a group of fanatical cyborgs. Unfortunately for them, the Gnishyans show up, and they’re taking no prisoners. Danger lurks around every corner in the final issue of the “Machine Moon” story arc, and it looks like it’ll only get worse.

The cover of this issue is all kinds of awesome. Not only is it gorgeous watercolor holiness, but also has a horror vibe to it. Seeing Tim-21’s metal skeleton exposed and dangling from the ceiling is creepy, more so with him caressing of Bandit. What should be a heart-warming moment is made scary by the uncanniness of the boy’s robotic innards. 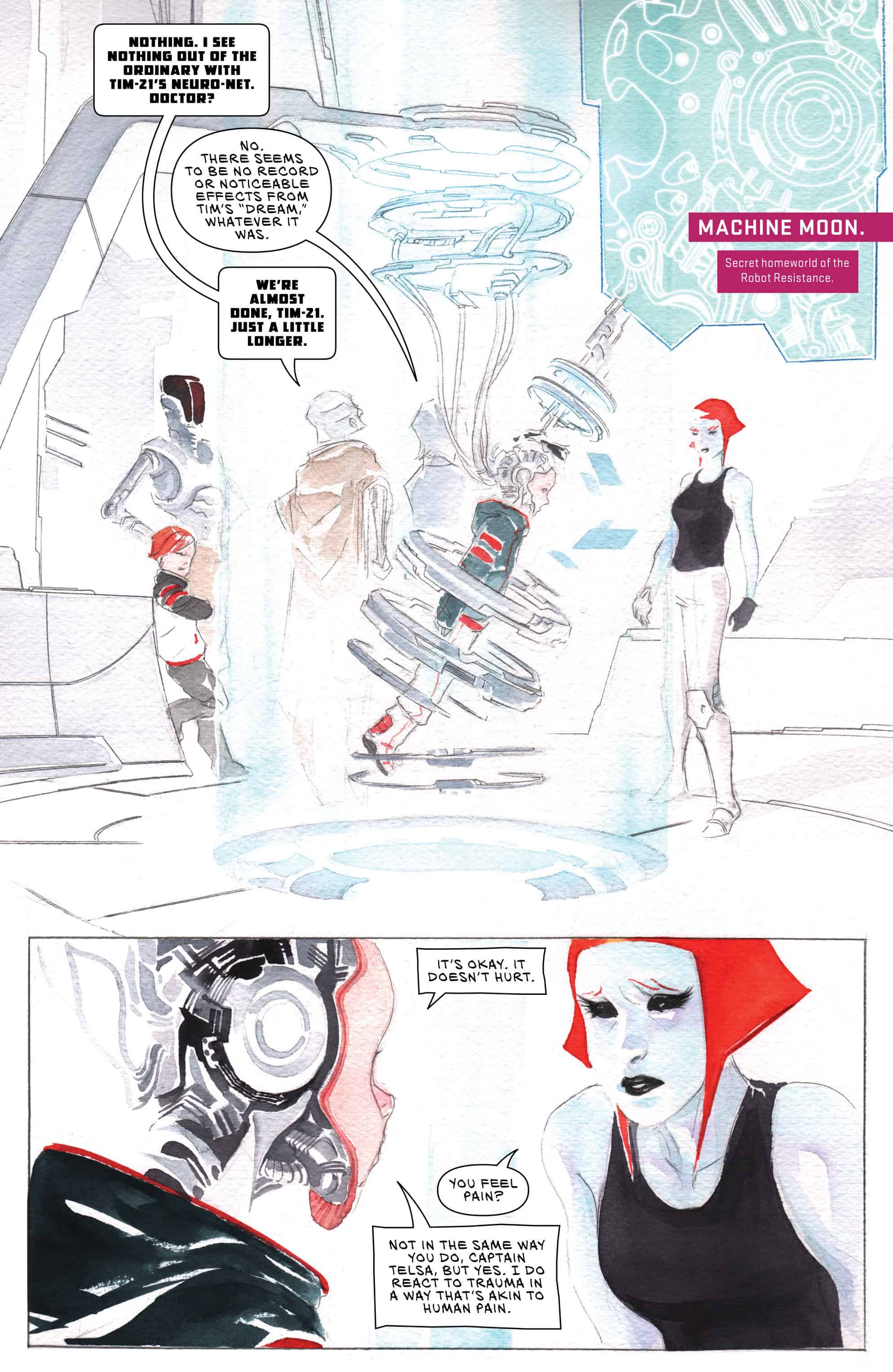 OMG! Just look at it! It’s 100% watercolor and has an impressive amount of detail applied. Nothing seems lacking or underdeveloped. Actually, there are times where this occurs. The wide shot here decreases the amount of detail and leaves a lot of white space. While reading, I got a sense that this set the scene. It’s a blaring white room, obviously some kind of laboratory, but also it’s suppose to give a sense of calm. After all, the Hardwire are supposed to be good guys. With less detail to the characters, you see some of the whiteness seep into them, like they’re buying into it.

However, near the end of the story, the color red slowly encroaches into and eventually consumes the whiteness. It lathers everything like a thick, greasy spill. It has the same nefarious glow as a horror movie, suggesting that a dark secret has been revealed. Red is also used for Sampson, suggesting a world dominated by death. Nguyen’s experimentation with watercolor shows that he is pushing the boundaries of Descender’s art.

I haven’t much to say other than that it’s good. Letters are clear and even spaced, no problem reading them. There is some experimentation, but only that the font of robot dialogue is thicker than that of human dialogue. Maybe other things could’ve been done, but it wasn’t necessary. Some stories experiment with lettering, others don’t. Nothing wrong with either.

Jeff Lemire is really good at writing complex characters. He starts them off as familiar archetypes and proceeds to complicate them, usually with a contradiction. For example, Telsa puts on a hard façade, but she shows legitimate concern for Tim-21. Psius is the fearless leader of the Hardwire, but he started life as a service robot.

These contradictions also play into an overall theme in this issue, which is the two-face nature 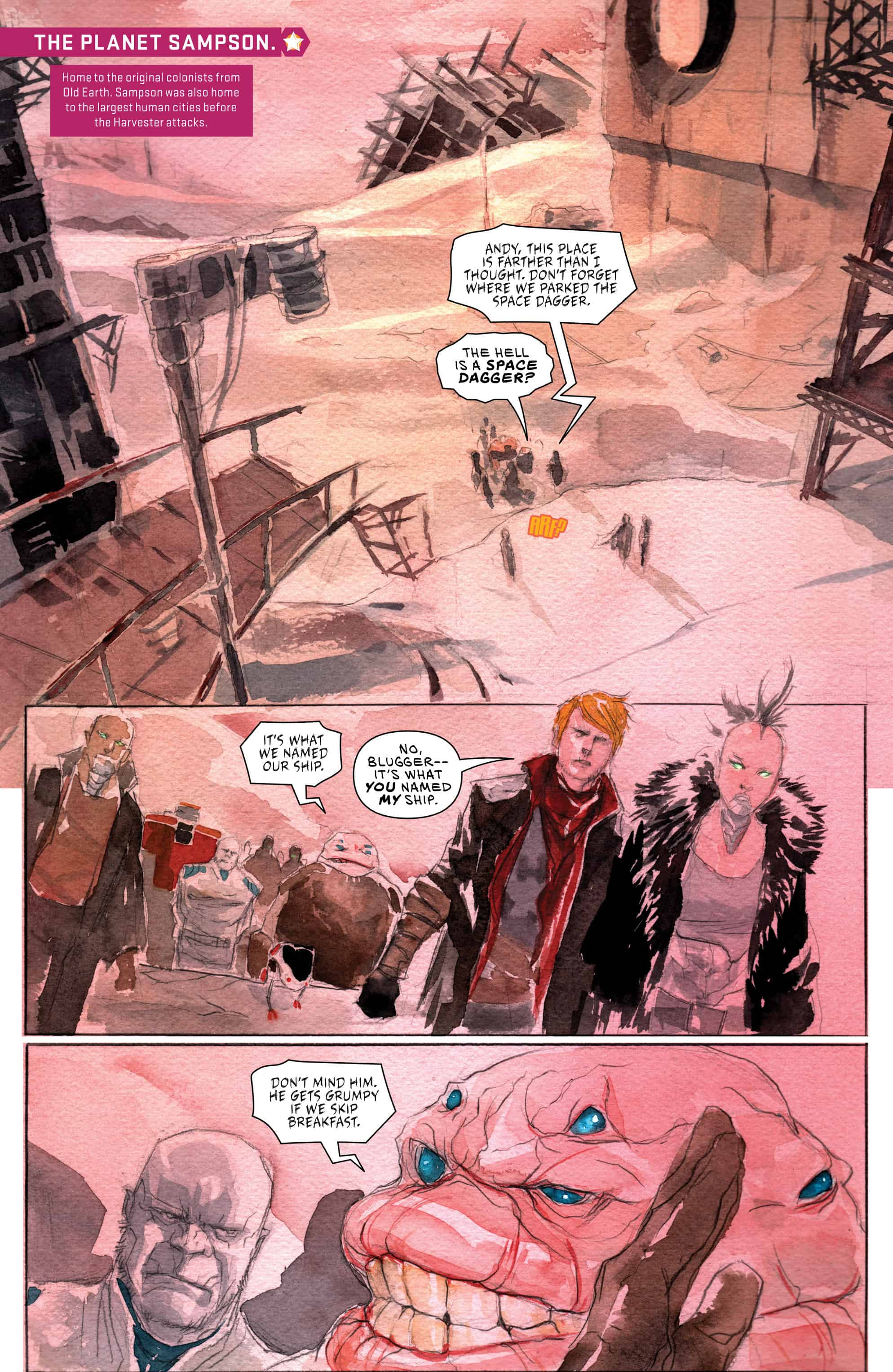 of the Hardwire. They claim to be freedom fighters, but a lot of their rhetoric is anti-human. At merely being compared to humans, a robot threatens to shoot Dr. Quon in the face. Also, Psius refuses to believe that the ancient robot, which he and other modern robots are based on, was designed by humanity. It’s like they’re concerned about racial purity. At some point, the rhetoric even becomes violent. One must wonder if the Hardwire are actually bigots, which would be scary. After all, heavily armed, organized hate groups have always been known for doing something stupid.

Tim-21 continues to go through his coming-of-age. He trusts the Hardwire impeccably, only to have that trust challenged. Also, he mistakes a robot for Bandit and reveals he misses his pet and his family. My theory is that Tim-21 yearns for childhood free from the dangerous world he lives in now. It’s the entire point of his quest. He cares more about reuniting with Andy and Bandit then saving the world. It’s an interesting aspect of him that makes Tim-21 complex despite his innocence.

I also found the interaction between Tim-21 and his clone Tim-22 interesting. Tim-22, who has so far been friends, admits to being jealous because Tim-21 is getting more attention from the Hardwire. It might seem like Tim-22 is just being a kid, but with the two-face nature of the Hardwire, one wonders if Tim-22’s jealousy might be a lot more dangerous than he lets on. Could you even say he’s crazy? Naw. No way.

The only part of the story that didn’t feel as exciting was the scenes on Sampson. Lemire has yet to go into detail about the Between. We get that their carbon beings obsessed with attaching robot parts to their bodies, but are they a crazy cult or merely overzealous fans? The depth of their obsession is not explored. The scenes are just setting up what’s going to happen next to Andy and the group. Hopefully, Lemire will go into deeper detail about them.

Descender #11 is a dramatic conclusion to yet another satisfying arc. It’s got gorgeous art, complex characters, and plenty of ways to pull out your heartstrings. Recommend for fans of science fiction with heart.