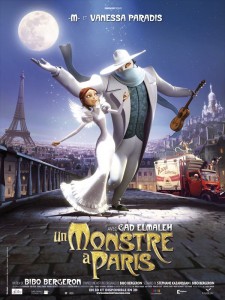 *Sound on Sight attended a press screening for the 3D version of the film under review.

The animated film market must be a very difficult one to navigate through for filmmakers. Animation, by its very nature, provides creative minds with a near limitless canvas to exhaust their ideas, but not everything will hit home with audiences. The latter group can be a fickle bunch, and anything that diverts from what is widely recognized and beloved risks being snubbed, never truly finding a decent viewership. This explains in part why some studios, rather than utilizing animation to expand the limits of visual storytelling, so often to ‘play it safe’, for lack of a better term. Such a strategy is logical to help ensure box office success, but creativity may suffer as result. Who knows what the box office ambitions were for those behind Un Monstre à Paris, but if one thing is certain, they should have tried to be more creative.

Un Monstre à Paris has as its setting the city of lights in the year 1910. Raoul (Gad Elmaleh), a delivery man who obsesses over his technologically sophisticated truck the likes of which James Bond would be proud of, and his short assistant Émile (Sébastien Desjours) are scheduled to present a package to a renowned scientist. Since the individual concerned is away on a business trip, the duo is greeted by a baboon helper, who sees them into a tall, dimly lit building where chemical potions and odd looking plants abound. Émile, who has brought along his film camera is convinced, despite his misgivings, by the brash, reckless Raoul to film him while he plays around with all the potions, oblivious to the consequences of tampering with science. As misfortune has it, an accident causes two liquids to mix…creating a terrifying creature, seen only as a terrifying silhouette at first, who jumps its way through the roof and into downtown Paris, quickly causing a panic. The chief of police, Maynot (François Cluzet), is a ruthless and obnoxious career man determined to make the most of the opportunity and kill the beast. Lucille, a beautiful signer at one of Paris’s coolest clubs and the apple of Raoul’s eye, finds the monster one evening just outside her establishment and makes a shocking discovery about its nature. Suddenly, Lucille, Raoul and Émile are fighting to protect the misunderstood monster from Maynot’s wrath.

The issues which plague director Bibo Bergeron’s film are noticeable from the very beginning. Even before the actual plot sets in, the audience is greeted by a very plainly rendered version of 1910 Paris, characterized by a visual style reminiscent of the first two Pixar Toy Story films which came out over a decade ago (17 years ago in the case of the original!). There is very little panache to the character design or the details of the streets, buildings and vehicles. Characters look very round and simplified, with whatever unique physical attributes given to each limited to unfunny exaggerations, such as one club servant boy with an elongated nose and silky wavy hair that covers his eyes most of the time. The world of Monstre is generally very bland, with visually compelling moments unfortunately very few in number, with perhaps one of the few exceptions being the film’s climax, which involves a chase and brawl atop the Eiffel Tower on a foggy day. It should be understood that not all studios, especially those operating outside the Hollywood system, are blessed with sizable budgets which permit them them hire the absolute best equipment an animators, but it is nevertheless unfortunate that a 2011 picture which look so boring.

Compounding the film’s problematic nature is the script, which, first of all, meanders far too much before it ever tackles the heart of the subject matter, and subsequently does not even attempt to do very much of interest by the time the most intriguing aspect of the story is revealed, arguably because it spent so much time setting everything up the in the first place and was left to scramble the rest of the way to the finish line. For an inexplicable reasons writers Bergeron and Kazandjian felt it necessary to develop several plot points before the titular monster ever becomes a true force within the narrative. The issues with said plot points are twofold. First, they seem to belong in another film (not one but two love stories!) and, second, not all of them even end up having a significant enough impact on the overall story, such as Maynot’s attempts to woo Lucille into marriage, an idea which is for all intents and purposes a non factor in the second half of the picture. By the time the monster becomes a critical character in the story, precious little running time is left, and while this section of the story is, admittedly, more interesting, not enough time and effort is put into making the big moments feel as if they are truly earned. Too much time is spent on action-adventure scenes than enriching the relationship between the trio of humans and the creature, which makes the second portion of the picture feel like a greater misfire than it otherwise should have been. After all, if Lucille, Raoul and Émile are so quick to acknowledge that the monster was just misunderstood and could be trusted, why not reveal that information to more people and turn the tide against the maniacal chief of police? Of course, the simple answer is that if the heroes do that then there is no movie, but just because the script forces the characters to make certain decisions in order have an adventure film does not make said script worthy.

‘What is the point if the (3D) effect is barely noticeable in numerous scenes anyhow, as is the case in this movie?…

Lastly, there is the most predicable complaint which shall not be tackled in too great detail in this review for numerous other critics have already offered their two cents on many other occasions. Why is the film in 3D if such a technology serves strictly no purpose in enhancing the experience? It is absolutely befuddling that filmmakers persist in using 3D as if the success of of their movie depends on it. The success of no movie depends on 3D, although it can very much improve the experience when used appropriately (Werner Herzog’s documentary Cave of Forgotten Dreams being a prime example). In the case of animated films the likes of Monstre, one is left to consider the possibility that it is merely a gimmick. What is the point if the effect is barely noticeable in numerous scenes anyhow, as is the case in this movie?

It is unfortunate, but rather than deliver a feature length animated film with a fresh French perspective, Un Monstre à Paris ends up being eerily similar to the disappointing Dreamworks and 20th Century Fox efforts, which themselves always fail to reach the same heights as Pixar or Disney, to the extent that it may be considered nothing more than an imitator, and a pale one at that.