The overstuffed Vinyl pilot gave us a lot to chew over. Directed by series co-creator Martin Scorsese, the episode had a wealth of rock ‘n’ roll depravity and drug-addled executives. There were many fascinating parts to the episode, but it also felt strained around the edges as it attempted to lay the groundwork for various storylines. Without someone like Scorsese at the helm, the whole thing might have come crashing down like the Mercer Arts Center did on Richie. “Yesterday Once More” gives viewers a chance to breathe; the pilot’s pace was largely determined by the amount of drugs Richie did after murdering someone, but episode two takes its pace from Richie, who’s finally allowed to slow down.

After surviving the theatre collapse, Richie ends up at a movie theater, doing martial arts moves along with a Bruce Lee film. His eyes are wild and there’s still cocaine under his nose. While Richie is reveling in his new lease on life, Zak, Scott, and Skip are waiting for him with the Germans. They’re about to finish negotiations to sell Richie’s label to PolyGram. The scene finds humor in the cultural disconnect between the Americans and the Germans; the Germans have seen Die Fledermaus at the Met, but the Americans suggest they check out Grease or Pippin on Broadway.

Zak steals away to call Richie’s wife Devon, who hasn’t seen Richie since he left on his bender. After Zak says that he’s probably fine, Devon explicates a theme that will certainly recur throughout the series: “Yeah, of course he’s fine. He’s always fine. It’s everyone around him gets f**ked.” Richie has decided to scuttle the buyout without any concern for his friends and employees, and there will surely be other people his decisions will harm. When Richie finally bursts into the meeting, bloodied and dusty, he announces that they’re not selling the company anymore, to the consternation of the Germans. The episode’s funniest moment comes when Zak, Scott, and Skip try to talk some sense into him and he incapacitates them with moves he stole from Bruce Lee.

Like the pilot, episode two features large chunks of flashback. It’s not clear whether this will run throughout the series, or if it’s merely a temporary device to develop Richie’s backstory, detailing the mid-‘60s at Andy Warhol’s Factory, with The Velvet Underground and Nico are playing and Richie meeting Devon for the first time. The Velvets sound dangerous and sexy, the perfect soundtrack to Richie’s growing infatuation. Warhol (played by the great John Cameron Mitchell) teases Devon about letting him film her for a screen test. Warhol’s screen tests were acts of aggression, designed to pick apart his friends and celebrities by forcing them to sit silently in front of a camera as it judges them. Devon eventually consents, but she looks off in the distance and sees Richie staring at her. Everything slows down and she gains strength from his gaze. It’s an exquisite moment and the strongest part of the episode. Mitchell doesn’t look anything like Warhol and doesn’t really attempt to mimic his voice or mannerisms, but the performance gets at the heart of Warhol’s manipulations without resorting to caricature. All of episode one’s flashbacks were from Richie’s point of view, and initially it seems like that’s still the case, until it becomes clear that Devon is the one remembering those early meetings with Richie. They’re a romantic contrast to her current situation, where she’s forced to pick up the mess that Richie has left after his meltdown. An attempt to get out of the house and take the kids for some breakfast also backfires when she drives away from the diner in the midst of a daydream – without the kids. 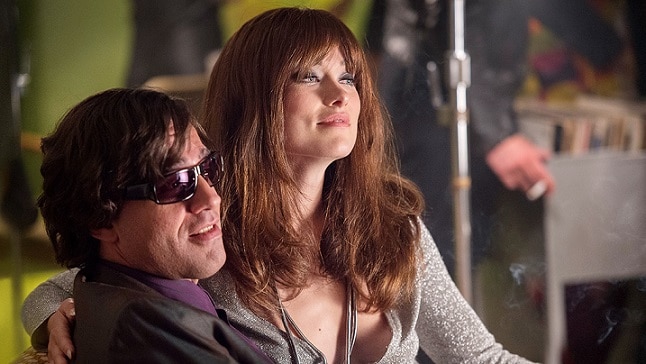 Back at the office, Richie announces that he’ll be trimming the employees by 40%, which induces Jamie to try to get her proto-punk band, The Nasty Bits, in working order. Julie is put in charge of them (since she’s only a secretary and a girl), but it’s clear that he doesn’t really understand punk.

Zak’s scenes this week are still somewhat rushed. After having his nose destroyed by Richie, he has to go to the Windsor to plan out his daughter’s Bat Mitzvah. The scene gets into troubling territory and seems to play on anti-Semitic stereotypes. The narcissistic daughter and wife just care about money and status, whereas Zak ends up being the stingy dad who’s always worried about the bill. It’s a funny scene, but one that gets uncomfortably close to the negative ways Jews have historically been portrayed. Later that night, after being nagged by his wife, Zak seems to contemplate taking an overdose of Valium, before realizing there are other ways to solve his problems. Perhaps his mental health will be further developed in future episodes.

At home that evening, Richie is ambushed by Devon, who was worried that he might have been killed in the theater crash. As soon as they’ve settled down, they’re interrupted by a visit from a homicide detective. But it’s not about the fact that Richie murdered Buck Rogers in the pilot – some bookie who was tangentially connected to Richie’s old boss has been murdered. There’s no suspicion about Richie’s involvement, but the meeting gets Richie thinking about his past again. The episode ends with him knocking on Lester Grime’s door. Grimes was abandoned by Richie, but perhaps he’s just what Richie needs to right the course of his life.