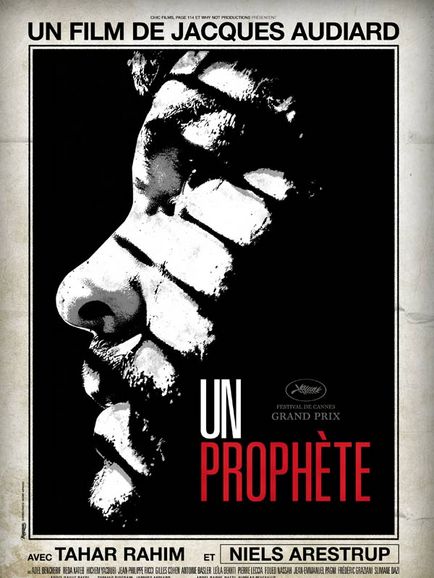 Un Prophète is a grueling experience that will keep you utterly gripped throughout its epic 155-minute runtime.

Director Jacques Audiard is carving quite a career as one of the most searingly talented French auteurs working today. Cresting on the wave of a number of well-received, robust Parisian thrillers including Read My Lips and The Beat That My Heart Skipped comes Audiard’s latest blistering entry to the crime genre, an heir apparent to Jean-Pierre Melville’s trench-coated urban samurai. Having garnered a cluster of awards, including best film at the 2009 London Film Festival and plundering last year’s Jury Grand Prize at Cannes, Un Prophète may just be the most perfectly realized new film of the decade.

Our anti-hero is the teenage Malik, a young Arabian man who is sent to a ferociously grim burghal jail for an unspecified crime, snippets of dialogue subtley revealingthat he may have been involved in an affray with a police officer. Thrust into this modern-day Gehenna, Malik is given a grim order – to murder a snitch whose activities threaten a Corsican gang faction led by the merciless César (Niels Arestrup), who ruthlessly explains that he must either kill or be killed. That forced acquiescence subsequently provides him with the protection of this powerful cabal whose tendrils control much of the minutiae of prison life – the drugs, the food, the porn, the basic luxuries that alleviate the remorseless suffering. After one of the most shockingly brutal scenes of European cinema for quite some time Malik finds himself under the wing of his new found comrades, the film however does not deviate into the artificial esprit de corps that this type of tale can slip into with Malik (in a magnetic performance by Tahar Rahim) understanding that an environment that is so deeply segregated along the ethnic lines of Corsican and Arabic factions can be manipulated to his advantage. His efforts at self improvement – learning new languages and keeping his mouth shut – mirror his progress through the criminal dominion. What an experience. Audiard has a reputation for being a tough, no-frills macho director, a modern emulation of Sam Fuller or Robert Aldrich and make no mistake, Un Prophète is a grueling experience that will keep you utterly gripped throughout its epic 155-minute runtime. The sense of incarceration is signaled by an urgent, hand-held shooting style that is encapsulated in claustrophobic angles, framing through cell bars and tiny spaces, expanding the canvas when Malik is permitted day release expeditions due to his apparent good behavior. The metaphors and allusions are there if you want them, there is a sense of possible redemption and the religious connotations are frequent but not bludgeoned into the narrative, instead they are intrinsically weaved into a very immediate vivacity, submerged in a very convincing tableau of violence as Malik’s ghosts return to haunt his achievements. There are frequent, muted references to shoes (walking in my footsteps?), a 40-day penance sequence toward the end of the film and the masterstroke of exemplifying Malik’s formal education – he is illiterate upon induction to the prison, but demonstrates his intelligence by learning not only French but also the Arabic and Corsican argot that essentially forms the spine of his criminal success. In that sense the film is an excellent companion piece to the rags-to-riches trajectory of Scarface or the Machiavellian instincts of The Godfather, complete with Michael Corleone’s intellect of forward planning. Crucially, you’re never particularly certain of Malik’s ambitions but you become sympathetic towards his achievements and as usual with these films you illicitly want him to succeed and prosper. Audiard makes certain to signal a vague moral compass to our confused and desperate protagonist early in the film as he attempts to avoid the murder he has been coerced into discharging by reporting his dilemma to the authorities, only to find that the level of corruption in the prison extends to the protectors and agents of the state leaving him with no option, no escape – an apt axiom to the films claustrophobic ambitions. The politics of an uncertain, uneasy multicultural France fester in the background, a grapnel of social reality that give the film a very prescient mood of its time, a reality cemented with the film’s reproduction of a functioning prison in a disused warehouse for the film’s production locale, all complemented with a sound design whose ambient effects were apparently culled from genuine recordings of authentic prison environments. Masterfully constructed, utterly ruthless, electrifying and absolutely essential viewing.