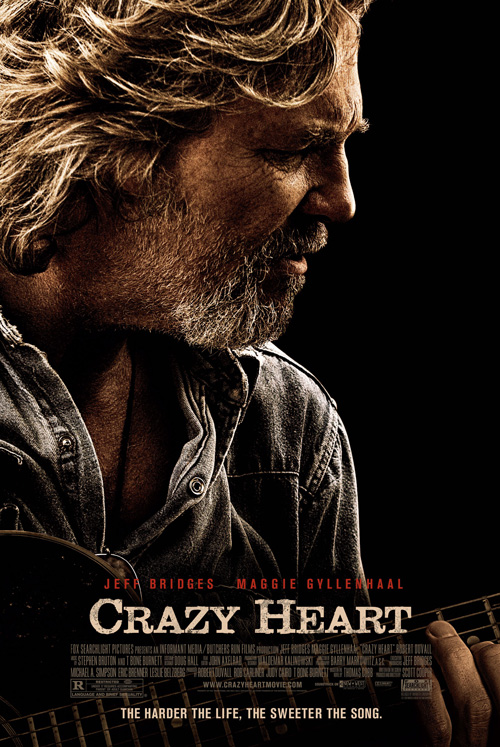 Crazy Heart is at its absolute best when watching Bridges run wild with his cantankerous old country legend.

If you are of the opinion that Jeff Bridges is one of our most precious natural resources and that contemporary country music is a creative wasteland, Crazy Heart may just be the film for you. If, however, you are more interested in seeing an unconventional and only intermittently bleak film, you may want to sit this one out. Some good tunes and a wildly impressive Jeff Bridges performance make the flick, and, not to shortchange the other talent in this film, which is capable to excellent, but there is a sizable gap between the quality of Bridges’ performance and the quality of the rest of the movie. Bridges’ “Bad” Blake is an under-renowned legend of Country stuck playing bowling alley gigs with “hippy” backup bands while his protege, Tommy Sweet (Colin Farrell), consistently sells out stadiums. Engulfed in cigarette smoke and whiskeys neat from frame one, Blake’s tour is as much a physical train wreck as an emotional one. Fortunately, his hapless tour inevitably leads him to Santa Fe and into the arms of journalist love interest Jean (Maggie Gyllenhaal ) and her little boy Buddy (Jack Nation). Jean looks past Blake’s obviously crippling addictions in favor of the brilliant artist beneath, and from there sparks fly. Jeff Bridges is outstanding. His transition into “Bad” Blake as a performer and as a broken man is unquestionable, and he gives one of the most physically distressing performances in recent memory. Gyllenhaal does well, as she tends to, but the movie spends far too much idle time with Blake and Jean, never fully developing or explaining their relationship while nevertheless begging the audience to care about it. Blake’s relationship with Tommy Sweet fairs much better, with Farrell and Bridges striking a very believable chemistry as mentor and wayward, if very successful,mentee . This relationship, too, feels like a more natural examination of “Bad”‘s issues with family than his time with Jean and Buddy does. A supporting performance from RobertDuvall as Bridges’ old pal Wayne seems strangely pointless, but the old man friendship between the two is at least sort of heartwarming to watch. Crazy Heart is at its absolute best when watching Bridges run wild with his cantankerous old country legend. The most captivating thing about the film is “Bad”‘s unending drive despite commitment issues and a stomach full of whiskey. And while the whole movie revolves around Blake’s mistakes and perseverance, it sometimes is stifling in its bluntness–as when he loses track of Buddy in Houston because he went into the bar for a drink. Bridges always pulls it off, but it’s not half as enrapturing to watch him talk about the son he abandoned twenty years prior as it is to watch him struggle to speak to Tommy or turn on the charm after puking in a back alley.

Despite some flaws, Crazy Heart is a moving film, and it is only made more moving by its soundtrack. Blake’s songs, as well as Bridges’ performance of them, are gorgeous, memorable, and devastating. It’s not too much of leap to imagine Bad Blake as a lost paragon of Country music, only remembered in small towns by folks as old as he. The strength of the ending is questionable–the film does not play to it’s strengths in the home stretch–but you’ll surely still walk away from this Crazy Heart with a new favorite songwriter.