How do you end a series after it’s defined a platform for nearly 10 years, where do you take those characters? Uncharted 4 attempts to solve these questions and does so by delivering a narrative that grounds itself on human relationships and knowing when to show restraint. It’s a showcase of graphical prowess, stunning art direction and emotional writing that makes it an unforgettable finale that surpasses every other instalment.

Nathan Drake – the lover of a good adventure and the merciless slaughtering of a country worth of people left Uncharted 3 promising Elena to settle down with her and to hang up the hat of treasure hunting. Obviously by the virtue of this game existing, plans are disturbed when an old face turns up in Nate’s life – his brother Sam, if you thought this game would just be Nate and Elena sitting on the couch and reminiscing about old times then you might be shocked, not that there’s none of that. In fact there’s a considerable amount of time spent reflecting, of questioning the desire to follow our passions vs appreciating the people around us that make life worth living. Surprisingly Uncharted 4 has a lot to say about life and frequently flares the emotions by proposing relatable life issues, themes of ageing, our career decisions, of relationships and most importantly of honesty. Though there is a plot about finding the lost treasure of the legendary pirate; Captain Avery that sends us on a rollicking adventure across the world, what is more interesting and what the game knows is more interesting is the foil that this presents to the characters going through this, or being forced to go through this. 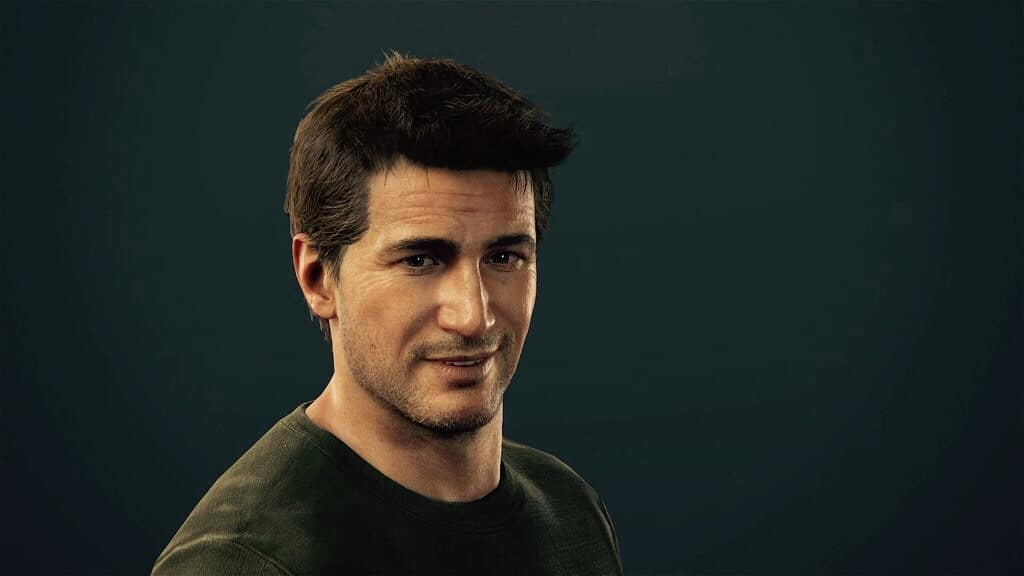 Lessons have been learnt from The Last Of Us and this is a much more grounded story that aims to bring out the humanity and consequences of all the explosive action and deft defying set pieces that you come to expect. Naughty Dog know how predictable these stories can be and know that the player is aware of this too, at every turn they eschew your expectations of what an Uncharted game is about – a set piece that looks obvious to happen, doesn’t, a character trope you predicted before the game even came out is teased, mocking you before pulling the rug and leaving your mouth agape. Unfortunately there are some contrived plot spins that every game in the series is plagued by, such as the villains under-handing you by swooping in after you find a clue just so they can be an ever present threat wherever you go. To spoil any specifics would be a huge injustice to the games intent to surprise, and you will be surprised regularly, your face at points will have the widest grin etched onto your face. 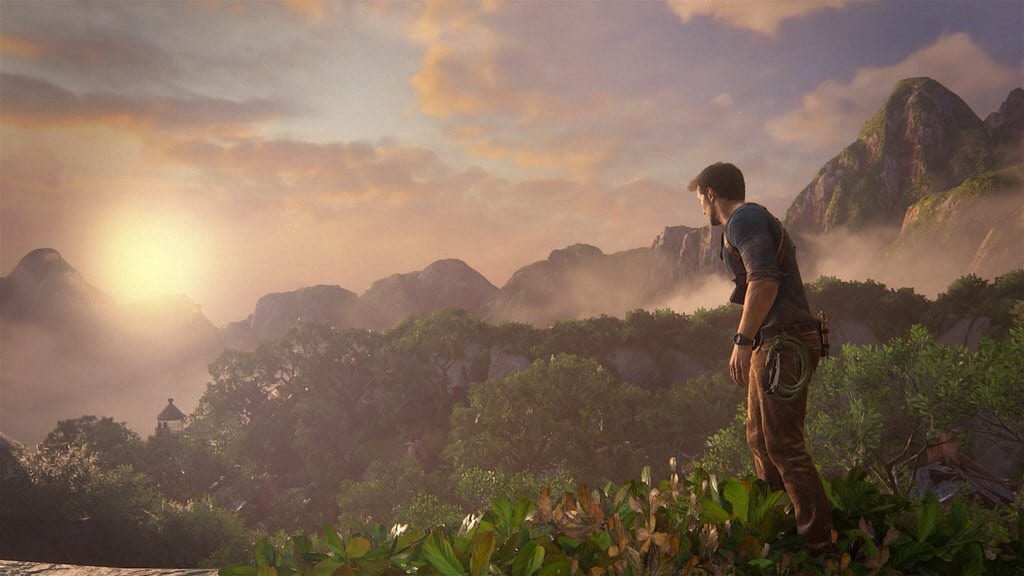 Standing out above any other game, the acting, the direction and the facial animation is a trick of magic. This is a group of developers and actors at the height of confidence, there’s a level of restraint that is rarely shown off in this medium within the dialogue here. Often cutscenes rely more on the looks and faces characters give than the actual words spoken, less is more and one subtle facial tick says more than a thousand words could. Sometimes equally music is used as a great storytelling device, a character in its own right, music cues seep into scenes when nothing more needs to be said, they accentuate the tone and the emotions characters are experiencing. Camera direction is also subtly adding to the tone of scenes, one brilliant use is in a scene that has one character in the bright sun talking to another who is sat alone in the dark, the juxtaposition reflects the distance between the two, literally and emotionally. The game then is more serious than the first three but humour is rife still, the writing flows perfectly though witty banter and quips Nathan is trademarked for. The dialogue isn’t ‘hilarious’ but it’s not meant to be, it represents a group of people who care for each other and share a sense of camaraderie, you buy into those relationships because they exchange the same type of awful, cringeworthy jokes you would share with your friends, it’s always endearing and charming – in the game I mean, I can’t attest for your friends. Aside from familiar faces, there are several new characters, the biggest being Sam, Nathan’s brother. This is where some minor issues begin to surface, bizarrely Sam comes across as the least pertinent character, even though a lot of time and focus is put into him he feels throwaway. The primary issue stems from the fact that his personality and even his voice reflect Nate’s own, it can be hard to differentiate from which brother quips are being fired from at times. While all the other characters bring out different aspects of Nate’s personality, Sam brings out what we already know Nate for. The villains are of a Bond archetype, cool and collective but lacking a good motive and in the end mostly unformed. They just always seem to be around, yet don’t have many scenes to develop them beyond trying to beat the Drakes, well acted but completely at service to the plot. 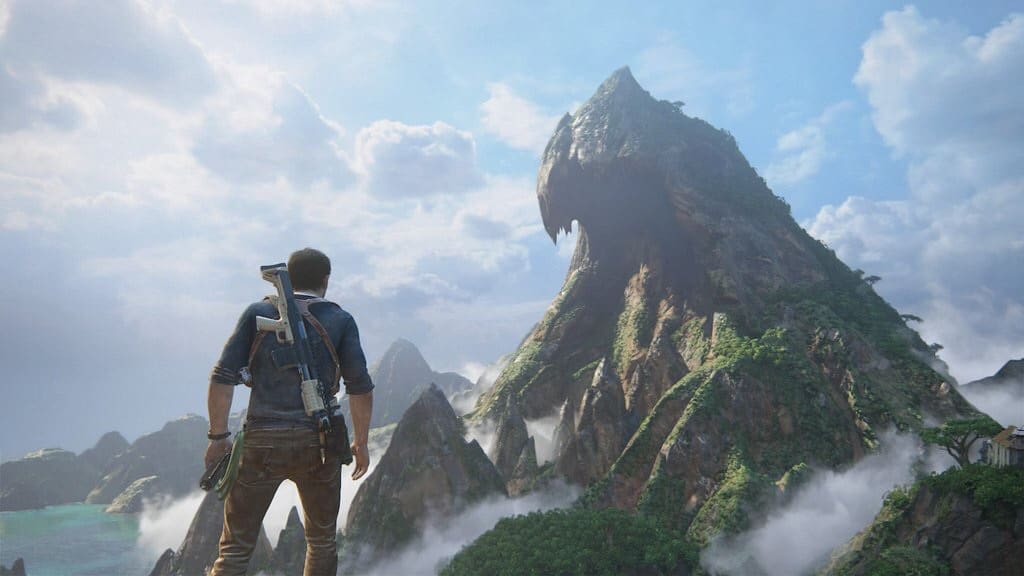 Another element of The Last Of Us that has seeped into Uncharted is the confidence to have quiet slow moments of interaction, where no action takes place. Downtime is paced expertly, explosive scripted chase sequences give way to methodical exploration of open expanses. The result leaves behind a game that has less memorable set pieces to hinge itself upon, there’s no one section that rivals the train from Uncharted 2 or the multitude of unbelievable hi-jinks that happen in Uncharted 3 but there are several jaw dropping action scenes that, while familiar offer a level of insane detail that wasn’t possible on the Playstation 3. Combat spaces are large and push the use of constant movement to get behind foes and find new cover, using new tactics such as the grappling hook and vertical paths to add dynamism. Guns have never been Uncharted’s biggest strength and although the mechanics have been improved, aiming still feels loose and wonky, lacking the satisfying punch that it could greatly benefit from. As great as the combat spaces are, similar to The Last Of Us they are overly obvious when you come across one, they don’t flow quite as well as you’d expect them to and feel disjointed from the rest of the experience. Climbing fares much better, landscapes now often have multiple routes to climb around and although it’s still hard to fail at the platforming, it does have more depth with the introduction of the grappling hook and sliding mechanics – even if the sliding is heavily overused during one chapter of the game. Vehicles in Uncharted are usually good at one thing: blowing up, however this time we get the opportunity to drive a jeep at several points. These parts are welcome changes of pace, there’s also an element of platforming as you try to get up muddy hills and raging streams. There is one addition that is perplexing to say the least, it’s the incorporation of dialogue options during cutscenes. Confusing because the game only uses this feature several times early on and then never goes back to it, disappointingly under-cooked. Optional dialogue on the other hand is a welcome inclusion that sheds new light on the characters and often has some good jokes. 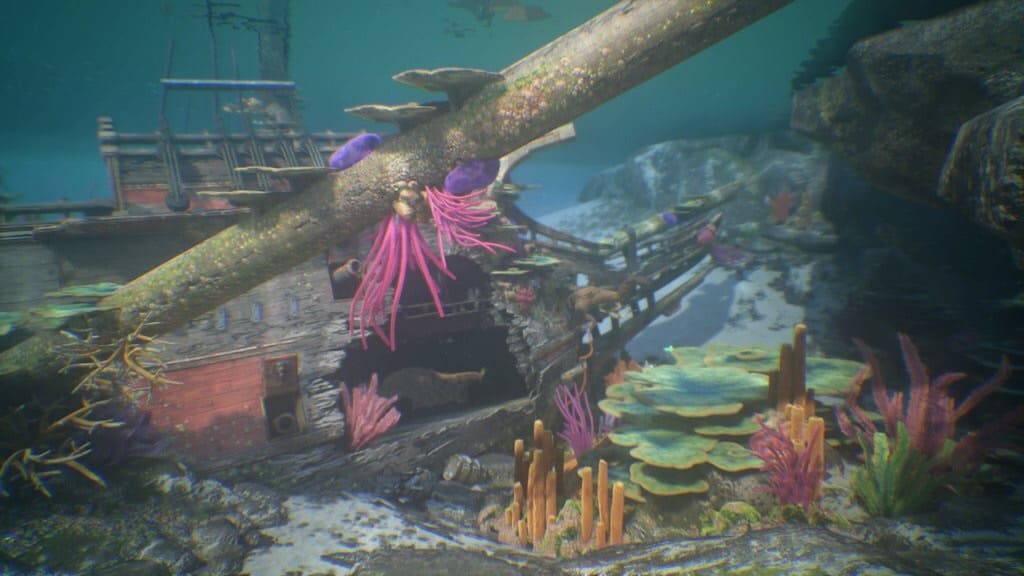 Uncharted has always been a tour de force for visual design and this one takes the medium to a new level, landscapes breathe with life, intricate details and decor caress every corner you look. Each chapter aims to show you something beautiful, new and even though a huge portion of the game is set in a jungle environment it never manages to feel repetitive. Character models are extremely detailed and there is an insane amount of bespoke animations for all the actions performed throughout. Other games will be measured against Uncharted 4 as the gold standard for art and visual design.

For the first time the soundtrack is not by Greg Edmonson – the composer of the first three titles – but by acclaimed movie composer Henry Jackman. It’s a noticeable change but for a more grounded and character driven story the music needed to reflect the shift in tone, the famous main theme is still here but the new rendition is the perfect example of how the music has evolved for the last adventure.

Coming away from Uncharted 4 leaves a big impression, it stays with you, it sparks the imagination. Naughty Dog have succeeded in creating one of the most memorable send offs for a group of characters that audiences have grown to love. The fact that the game has something to say, not being satisfied with just being a great action experience shows the amount of care, maturity and meticulous devotion they have for this series. A perfect game it is not, but it is a rare experience that proves the strengths of everything the medium can do and how ambitious we can be.