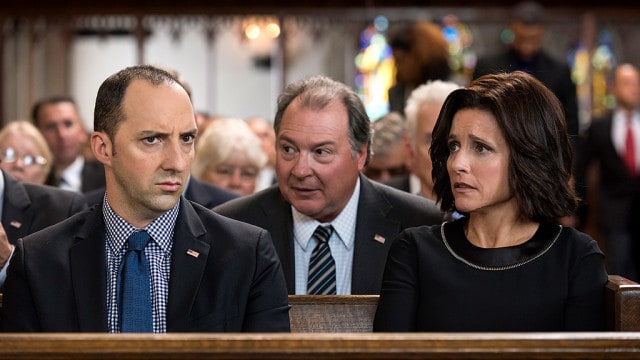 For Selina Meyer, winning trumps all other personal concerns, whether those entail being sympathetic to a grieving daughter or honoring her deceased mother. That singular focus is the secret to Selina’s success, but it also makes her a monster. Sometimes that monstrous side peeks out and the public gets an eyeful, usually leading to her failure. Veep is funniest and most successful when Selina is terrible enough that she dances on the line between success and failure. “Mee-Maw” finds her at her worst, which is best for viewers.

While speaking at a windmill farm, where she’s careful to remind the press that she has won the popular vote, Selina learns that her mother has had a stroke and is on life support. Even though she doesn’t care much for her mother, Mike wants her to rush to her bedside, if only to raise her approval numbers. Catherine is already at the hotel and is nearly inconsolable about Mee-Maw’s impending death. Catherine’s inability to control her emotions is funny enough in contrast to her normal dour self, but the portrayal also rings true to life. She evokes young people who haven’t experienced much death and are completely dismayed at the thought of loved ones dying. Selina’s main concern seems to be the quality of Mee-Maw’s nails, which strikes Catherine as cold, but it’s also another smart choice. Selina is the one who actually knew what Mee-Maw was like, and really knows what she would have cared about. Catherine is more concerned with some Tim McGraw song she used to like, which probably wasn’t quite as important to her. 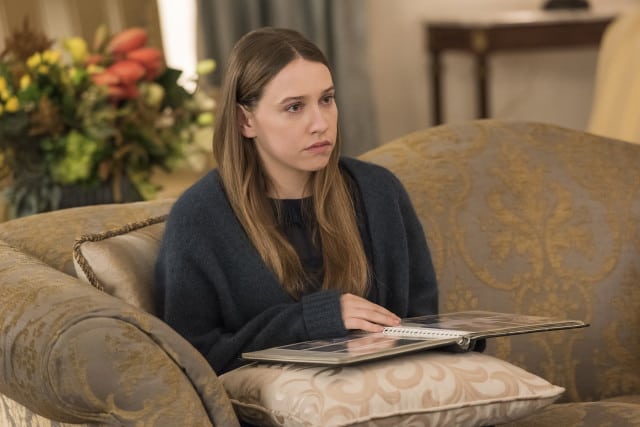 Mee-Maw is brain dead (which means she’s dead) and doesn’t have any end of life plans in place, so Selina gets to make those final decisions. Weighing on her decision is the fact that she will almost certainly get a boost in popularity following the death of her mother. Selina decides to have the ventilator removed, forgetting that Catherine went out to get coffee for her. As Mee-Maw’s body is breathing its last breaths, everyone’s phones go off with the news that the recount will continue, great news for Selina. When Catherine returns and finds her grandmother has died, Selina tries to console her before bursting out into joyful laughter because she’s won Nevada. Julia Louis-Dreyfus’s laugh here is one of the darkest and funniest things she’s ever done on the show; I couldn’t stop laughing at it.

While Selina is stuck in the hospital, Jonah and Richard are pretending to be grass roots protestors in favor of continuing the recount, while O’Brien aides are protesting on the opposite side, an allusion to the Brooks Brothers riot from the 2000 election, where George W. Bush aides pretended to be grassroots protestors in favor of stopping the recount (something in which they were successful). Unfortunately for them, the remaining ballots are absentee military votes which start to sway the vote toward O’Brien. By the end of the count, Selina has not only lost Nevada, but also lost the popular vote she had bragged about. While giving the eulogy at Mee-Maw’s funeral, Selina finally breaks down and lets Catherine play the Tim McGraw song. To make matters worse, Mee-Maw left Selina out of her will and gave everything to Catherine. What a bummer!

The most interesting part of this episode was how it finally gave viewers hints at what made Selina as terrible as she is. Selina had a terrible mother, and she turned into the same kind of mother without even realizing it. I thought that Selina had reached her peak level of awfulness with last week’s episode, but I totally failed to anticipate the depths she could sink to in “Mee-Maw.” The worse Selina is, the funnier Veep gets, so hopefully next week’s will be about her deporting child refugees back to certain death. Or something like that.