As seen in comics like Phonogram, Scott Pilgrim, various books by the Hernandez Bros, and most recently The Wicked +  the Divine, comics and music can have a beautiful relationship. As I wrote in an article back in 2014, comics and music have a similar type of time keeping with the panel layout, gutter space, and word balloons helping keep “time” like time signatures, measures, notes, and rests in sheet music. Also, in the past couple years or so, there have been quite a few comics starring members of bands with varying amounts of actual music being played, including Jem and the Holograms, Spider-Gwen, and Black Canary. And then there’s a webcomic about just the music and the band members’ relationships as they flash back to their origins, go on tour, get lost, and finally rock out. 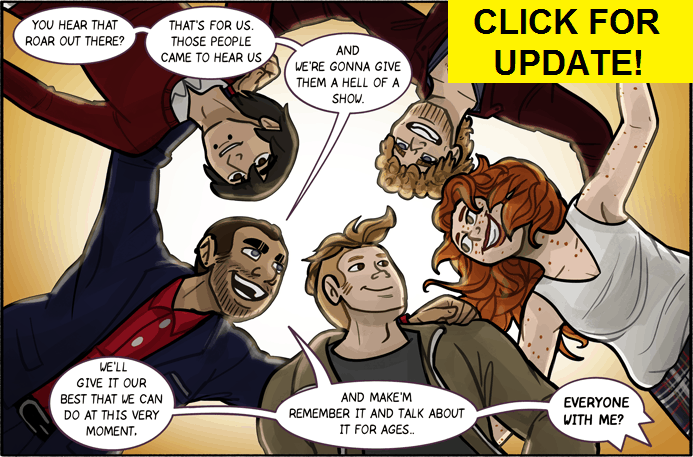 Radio Silence is a webcomic about a British rock band with the same name as the comic, and it’s written and drawn by Canadian cartoonist Vanessa Stefaniuk. Unlike some comics, the art style of Radio Silence sprang out fully formed Athena from Zeus’ forehead style from the early chapters. Stefaniuk really pays attention to detail and body language in her characters giving each member of Radio Silence a distinct visual trademark, including super nerd/guitarist Colbie’s beanie, lead vocalist Matt’s amazing stubble, drummer Wren’s freckles and ginger hair, bassist and “team mom” Brent’s mohawk, and introverted keyboard player Shy’s bangs. And their looks bleed into their personalities as Stefaniuk’s plotting comes out of character relationships instead of pointless drama and rock star cliches.

The concert scenes in Radio Silence are what fight scenes are in superhero/action comics, and Stefaniuk gets great energy using layouts and colors. And the gigs also add to characterization with Shy meticulously playing his keyboard while best friends Matt and Colbie rock out to a cover of Queen’s “Don’t Stop Me Now”, and Wren brings the anarchy of the drum kit. (And even smooches some of the members of Screaming Sirens, the band they opened for.) However, Stefaniuk doesn’t bore her readers with non-stop and plays with time using a nice montage with cutaways to different band members to simulate an entire concert. Currently, in the comic, Radio Silence has just wrapped their first gig, and it will be interesting to see what Stefaniuk brings to future performance because she basically nailed the feeling of an entertaining, intimate rock show with flashing colors, audience reactions as well as Matt channeling his inner Freddie Mercury with some good natured stage patter.

But this concert has a big effect because Vanessa Stefaniuk develops her cast of characters. through both humor and genuine emotion as she shows all of Radio Silence’s little idiosyncrasies in what was supposed to just be a routine tour stop. The conflict between the band is fairly grounded and realistic as the more introverted Shy has problems being around the more  boisterous members of the band as shown by panels of him reading a book or on his laptop as the others have loud conversations around him or spill coffee on his textbook while he is trying to study for university. He ends up hanging out with Colbie, who is a huge Harry Potter fan, and ends up back on the tour bus with a wizard hat and way too many sweets. The intensity of the Radio Silence band members can be seen in their passionate arguments about pop culture, including an entire strip about who the best James Bond is culminating in a Goldeneye battle between Wren and either Matt or Colbie (I’m color blind and couldn’t make out the colored outlines on the word bubbles.) for the right to either rewatch Casino Royale or see Never Say Never Again aka Sean Connery’s last, unofficial Bond film. These fun, slice of life moments really help readers connect with the characters and come back for the twice weekly updates. 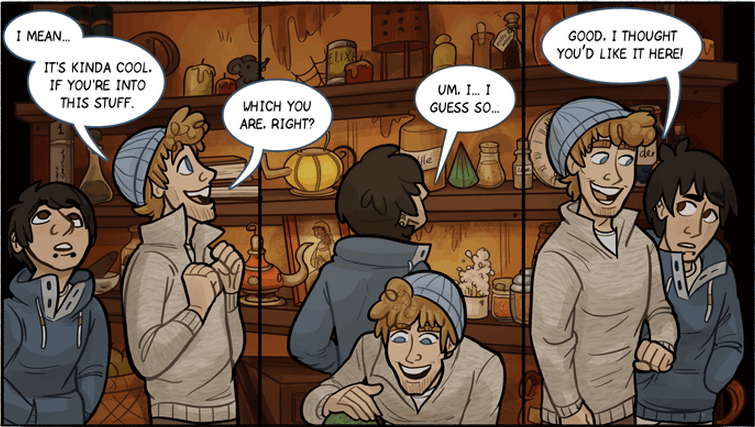 Radio Silence is a fun webcomic about some intense, passionate musicians, an introverted keyboard player, and their manager, who is the mature adult of the group. However, she’s just as happy as the rest of the band on album release day and is portrayed as a real friend to Radio Silence and not a nag or a promoter trying to take advantage of them. Vanessa Stefaniuk has created a cast of lovable characters, who are willing to make sacrifices, to make this band thing work, but still like to have fun. And her art and colors are filled with emotion and definitely fit in the cute, yet fashion forward styles of cartoonists like Batgirl‘s Babs Tarr, Hellcat’s Brittney Williams, Jonesy‘s Caitlin Rose Boyle, and Lissa Treiman on Giant Days, but depicting more realistic events. She can also pull off crowd scenes as well, which will come in handy as Radio Silence plays more gigs. (Also, I hope  one day the Giant Days girls will go to a Radio Silence gig.)